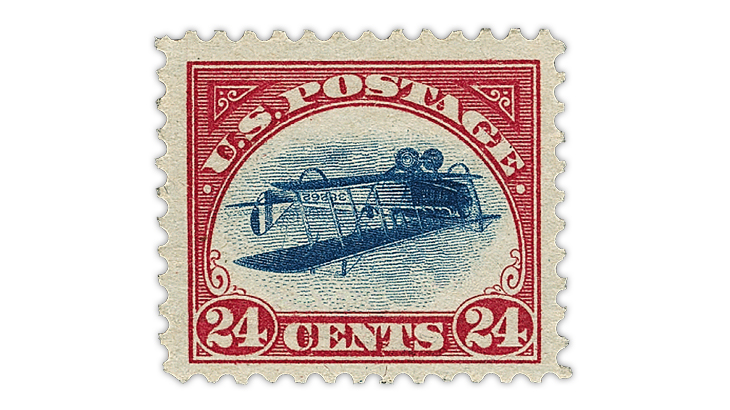 The position 77 Jenny Invert error stamp is slated for auction in March, according to Siegel Auction Galleries.

Robert A. Siegel Auction Galleries of New York City has announced plans for an auction of the mint, never-hinged 24¢ Jenny Invert airmail stamp from position 77.

The famous 1918 error stamp will be offered in March, according to the firm, but the date of the auction had not been announced as the March 8 issue of Linn's Stamp News was going to press.

The invert stamp in this sale is from the collection of American businessman Gerald Forsythe, who bought the stamp for $576,000 in a 2014 Spink USA auction.

Some details of the upcoming sale were revealed in the Winter 2021 issue of the auction firm's newsletter, The Siegel Despatch.

Along with the valuable error stamp, Siegel will also auction letters associated with William T. Robey, the collector who first purchased the only known pane of 100 Jenny Invert error stamps when they went on sale in Washington, D.C.

The letters, from the Drs. Joanne and Edward Dauer collection, include Robey's letter to New Jersey philatelic researcher Elliott Perry, revealing he had purchased the pane of inverts.

Linn's will report more about the Siegel auction as additional details become available.