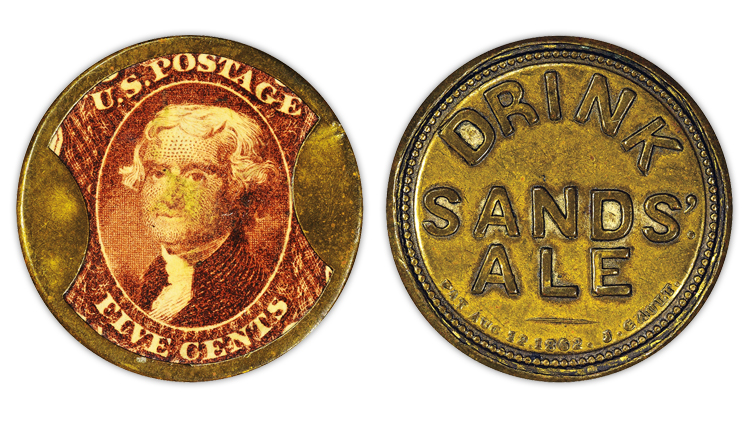 Kagin’s upcoming two-day auction at the National Money Show in Pittsburgh, Pa., will include 38 lots of encased postage. This example is the 5¢ Thomas Jefferson-Drink Sands’ Ale encased postage.

The auction will take place March 28-29, with the encased postage stamps offered during the auction’s Friday session.

The example in the auction is described as very fine-extremely fine by Kagin’s.

“Rich color and detail of the Jefferson postage is also mentioned with only a small flaw at the right cheek,” according to the auction description. “The case is attractive at back with still visible silvering within some lettering.”

The Scott catalog shows a value of $3,750 for the 5¢ Sands’ Ale, with the amount in italics to denote an item that can be challenging to value accurately.

Also on offer is an example of the 10¢ George Washington-Mendum’s Family Wine Emporium with ribbed frame (Scott 132a). Kagin’s notes that just two examples of the variety are documented, with this piece last selling at $8,625.

The auction can be viewed at https://auctions.kagins.com, with online bidding options available.