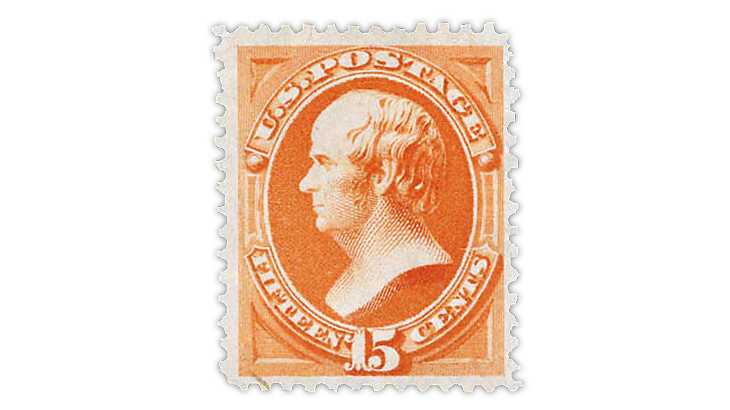 This United States 15¢ Daniel Webster stamp from the 1880 special printing will cross the auction block during Daniel F. Kelleher Auctions’ Dec. 3-5 Flagship sale in Danbury, Conn. The stamp has an opening bid of $12,500.

Stamps spanning the globe are the focus of the first day of the sale, with more than 500 lots of British Commonwealth; Europe and colonies; Asia, Africa and the Middle East; and Latin America.

United States, Confederate States and U.S. possessions take center stage on the second and third days of the auction. All major 19th-century and early 20th-century stamp series are well represented, as are back-of-the-book and revenue issues.

Also up for bids is the Richard Levy collection of U.S. Presidential (Prexie) series postal history. Among the key items is a solo use of the 22¢ Grover Cleveland stamp (Scott 827) on a registered cover sent in 1941 from Ithaca, N.Y., to Buffalo, N.Y. In his seminal 1994 book The Prexies, Roland Rustad writes that the 19¢ Rutherford B. Hayes (Scott 824) and the 22¢ Cleveland are the hardest of the nondollar-denominated Prexies to find as solo uses on cover.

The auction also includes a never-hinged example of Spain’s 1938 Defenders of Madrid airmail semipostal souvenir sheet of one (Scott CB6b). Kelleher states that only 1,000 sheets were issued, numbered 00001-01000.