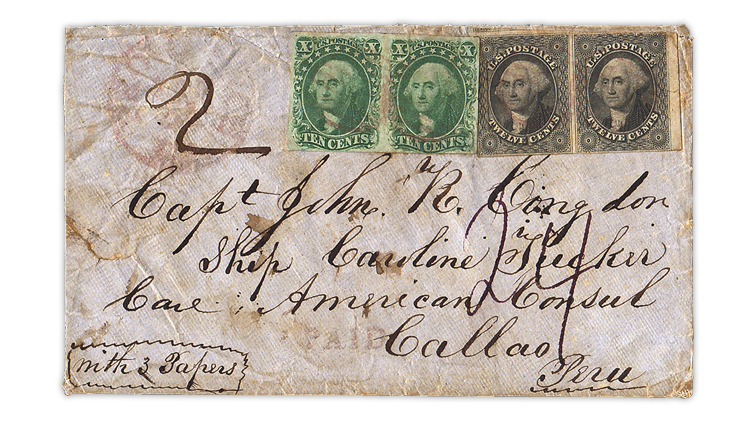 The final lot in the sale includes the balance of the collection, a “group of 21 covers, two picture postcards and four letters (some of the covers also with letters), all to, from or about Naval ships,” according to Kelleher.

Among the choice covers from the Patrick collection is a letter sent in the late 1850s to a naval officer aboard the commercial clipper SS Caroline Tucker.

Two horizontal pairs of the United States 10¢ green and 12¢ black George Washington stamps (Scott 14 and 17) from the 1851 regular issue were used to pay the 44¢ postage on the double-weight letter.

Kelleher described the cover as “an exceptionally rare example of a double weight use of the 22¢ treaty rate to Peru” and lists it with an estimate of $2,000 to $3,000.

Kelleher provided the following analysis of the rate, “Prepaid at double the then-current 22¢ per ½ oz. rate for mail carried by American packet to Panama followed by British packet to Peru.” Kelleher also noted that this 22¢ treaty rate began Dec. 1, 1856.

The first day of the Nov. 18-19 Flagship sale includes stamps and covers from the British Commonwealth, Europe and colonies, Asia, Africa, the Middle East and Latin America. Stamps and postal history of the United States and possessions are up for bids during the second day of the auction.

Leading off the U.S. airmail offerings is a never-hinged 1918 24¢ carmine rose and blue Curtiss Jenny stamp (Scott C3) with a 2020 extra fine-superb 95 graded certificate from Philatelic Stamp Authentication and Grading.

Kelleher described the blue Jenny biplane vignette as being “just a tad fast,” meaning it is printed somewhat to the left within the carmine rose frame.

An extra fine-superb 95 example of Scott C3 in never-hinged condition is valued at $350 in the Scott Stamp Values section of the Scott Specialized Catalogue of United States Stamps and Covers.

Separate catalogs have been prepared for the Patrick collection and Flagship auctions. Both can be viewed on the Kelleher website, with online bidding options available.