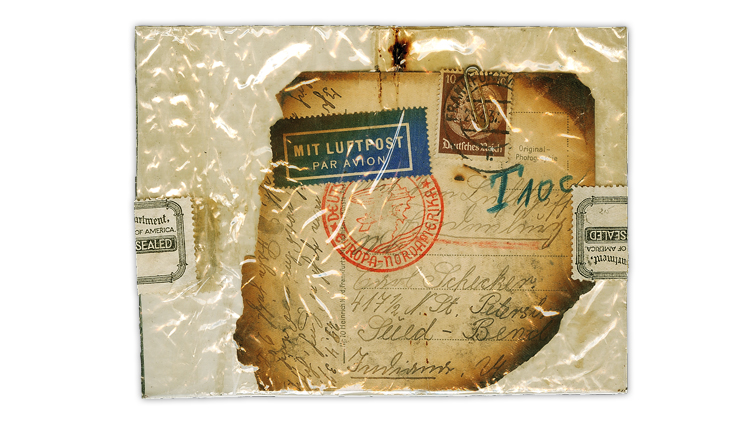 A postcard mailed from Frankfurt, Germany, to South Bend, Ind., traveled aboard the ill-fated 1937 Hindenburg airship flight that ended in disaster in Lakehurst, N.J. The preserved charred postcard with red flight cachet will be auctioned by Heinrich Koeh 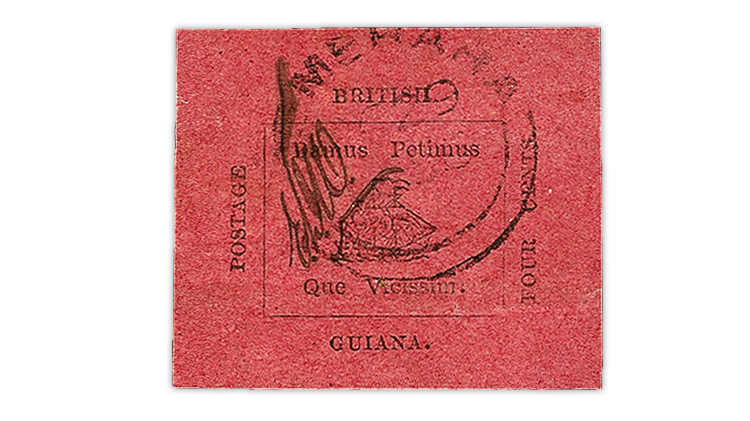 The upcoming five-day auction series from Heinrich Koehler is worldwide in scope and extends from centuries ago to the modern day.

The auctions series will take place March 26-30 at the firm’s galleries in Wiesbaden, Germany.

Collectors will find dozens of intriguing United States covers, including an example of the 1845-46 10¢ black on greenish St. Louis postmaster’s provisional stamp on a cover mailed to Philadelphia, Pa.

The stamp is one of the famous St. Louis Bears (Scott 11X2). It is tied with a red St. Louis circular datestamp, and the cover includes a red straightline PAID marking as well.

The 2019 Scott Specialized Catalogue of United States Stamps and Covers values the stamp on cover at $14,000, with that figure in italics to indicate an item difficult to value accurately. But a catalog note adds, “Covers with the stamps tied by handstamp sell at considerable premiums depending upon the condition of the stamps and the general attractiveness of the cover.”

A run of more than 350 covers from the Dickson H. Preston collection of zeppelin covers has all of the variety one would expect from such an extensive offering, including an example of a Hindenburg crash cover from 1937, addressed to South Bend, Ind.

The badly scorched German postcard is preserved within a transparent covering secured with two U.S. Post Office Department Official seals. A postage due manuscript “T10c” in blue pencil is clearly visible, and the 10-pfennig chocolate President von Hindenburg stamp appears to be struck with a Frankfurt postmark and attached by paper clip to the postcard within the encasement.

The postcard also shows a blue German airmail etiquette and a round zeppelin flight cachet stamped in red.

The covers offered from the Juergen Briese collection of Belgium include postal history from 1459 to 1794.

A 1481 letter from this group is signed by Archduke Maximilian (later Emperor Maximilian I).

Another highlight is an entire letter from Paris to Ghent struck with the post horn marking of the Taxis post office at Ghent, dated 9.7.1674.

“This is the oldest Taxis-marking in Europe,” according to Koeh­ler, “only in use 1674-75. Only a few entires are recorded.”

A more recent rarity is an unissued semipostal stamp from Germany. The 60-pfennig+30pf Olympic Games semipostal was printed in 1980, but withdrawn before it was issued after what was then West Germany joined a multination boycott of the Summer Games in Moscow to protest Soviet military action in Afghanistan.

However, a few of the unissued stamps in the possession of a German postal official were accidentally used on mail and later recovered by collectors.

Along with the main catalog for this sale, which includes 3,571 lots of Germany and worldwide material, Koehler has also produced specialized catalogs for auctions of the kingdom of Saxony, Danish West Indies 1773-1917, and Ireland, all of which will be offered during the same auction series.

Auction catalogs can be viewed online, and online bidding options are available at www.heinrich-koehler.de.