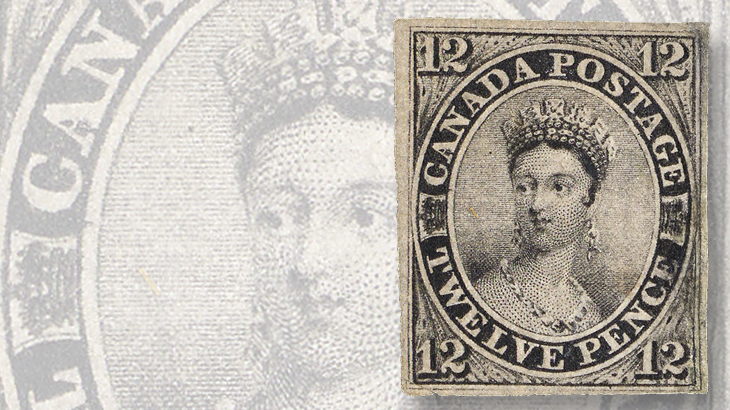 Spink’s June 15 Collector’s Series sale in New York featured this example of Canada’s sought-after 12-penny Queen Victoria of 1851. With no gum and skillful repairs to the right side, it sold for $37,475. 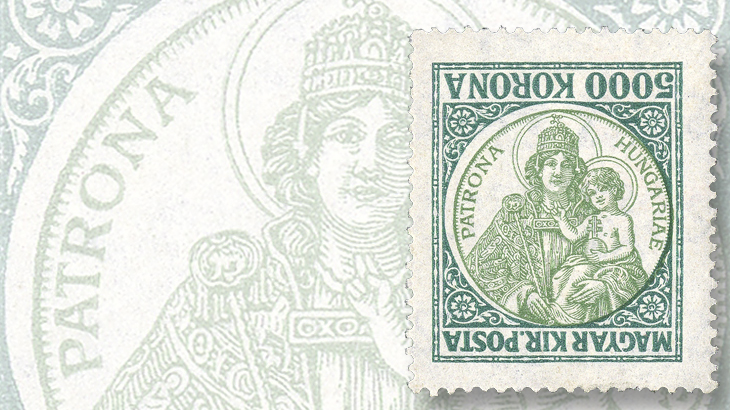 In its June 15 auction in New York, Spink offered Endre Krajcsovics’ stellar Hungary collection. One of many impressive items was this Madonna and Child invert, one of about 50 available to collectors, which sold for $11,600. 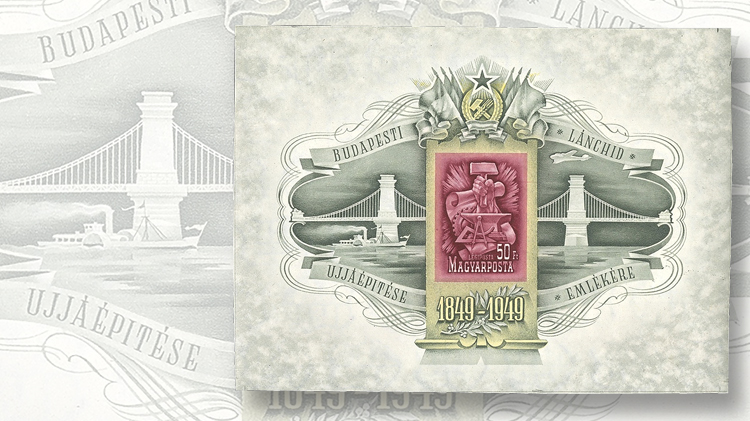 Among Hungary’s postwar issues was a beautiful souvenir sheet depicting Budapest’s famous Chain Bridge, the first permanent crossing over the Danube in that city. This scarce imperforate variety, offered in the Spink sale of the Krajcsovics collection, we 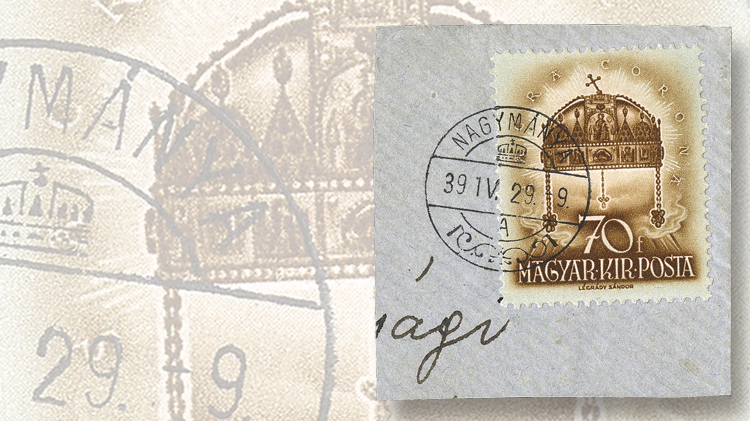 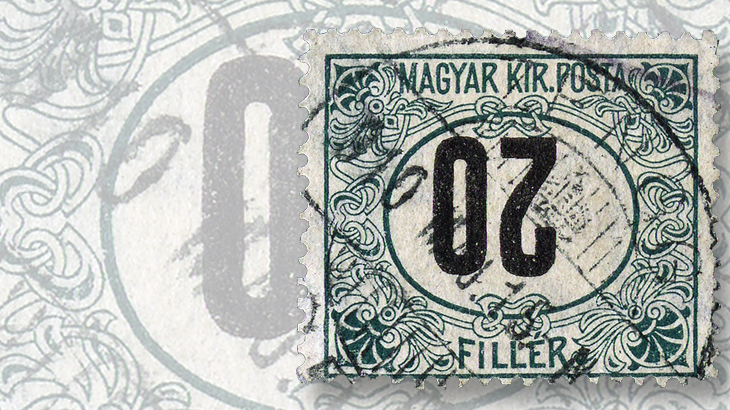 This inverted-center 20-filler postage due stamp of 1908-09 was said to be one of just a handful known. Postmarked in 1910 in Zengg, the error sold for $7,575 during Spink’s sale of the Krajcsovics collection of Hungary.
Previous
Next

Hungary’s position at the fulcrum of Europe has resulted in considerable geopolitical see-sawing during the past 200 years.

Politically riven and perpetually redrawing its borders, the nation nevertheless has managed to sustain a clear national identity throughout the 19th, 20th, and early 21st centuries.

Not surprisingly, Hungary’s interesting history is mirrored in its stamps, and you can get a pretty good grasp of the narrative by immersing yourself in the complexity of its philately.

The first stamps appeared in 1850, as part of the Austro-Hungarian dual monarchy. The first distinctively Hungarian designs were issued in 1871.

After the monarchy was abolished at the end of World War I, Hungary became an independent people’s republic, and briefly a Soviet republic, before a fascist-dominated regency was re-established in 1919, continuing until World War II.

During this time, parts of the country were variously occupied by France, Romania, Serbia, Czechoslovakia, and Germany.

After World War II, a communist republic was declared, which lasted until 1989. Freed from Soviet domination, Hungary joined NATO in 1999 and the European Union in 2004.

One collector who has been a longtime devotee of Hungarian philately is Endre Krajcsovics, who has written numerous specialist articles on the subject. His collection went under the gavel at Spink in New York on June 15.

The collection was filled with significant postal history, stamp varieties, proofs, and other interesting items from all periods of Hungarian philately.

The pride of the collection was an example of Hungary’s most famous error, the inverted Madonna and Child from a 1921-25 set.

The stamps’ iconography was an important part of reasserting a traditional role for the monarchy after the country’s post-World War I flirtation with communism. The design is inscribed “Magyar Kir. Posta” — “Kir.” being short for “kiralyi,” or royal.

The 5,000-korona denomination (Scott 386a) is the only stamp of the bicolor set on which an invert error occurs.

Fewer than 100 examples are known to exist, and almost 40 of those are in museums or other institutions, leaving about 50 for collectors.

The well-centered, lightly hinged example in the Krajcsovics collection sold for $11,600, including Spink’s buyer’s premium of 20 percent on the first $2,000 and 15 percent on the rest.

High realizations went to other errors as well.

The error stamp differs in color from the 1936 issue of the same design. The example in the Spink sale, tied to a piece of an envelope by a neat 1939 circular datestamp from the town of Nagymanya, sold for $4,844.

The bridge, built in 1849, was the first permanent crossing over the Danube and was regarded as one of the wonders of the modern world at the time of its building.

It was as important to the development of Hungary’s economy and national pride as the Brooklyn Bridge would be to New York several decades later.

The 50-forint airmail souvenir sheet marked the centennial of the bridge’s construction, as well as its restoration and reopening after being destroyed by German forces in 1945.

The sheet was issued perforated, but an imperforate variety exists as well (footnote after Scott C66). The never-hinged example offered by Spink bested its Scott catalog value to sell for $6,713.

In 1953, Hungary was on top of the world, soccer-wise. On Nov. 25, it handed England an unprecedented 6-3 drubbing at Wembley, a result commemorated on Dec. 3 with the issuance of an overprinted airmail stamp (Scott C128).

This was no fluke result: the “Mighty Magyars” were also the reigning Olympic soccer champions and had an unbeaten streak of 24 international wins stretching back to 1950.

As the team prepared for the FIFA World Cup finals in Switzerland in 1954, the Hungarian post office prepared a commemorative airmail stamp to mark the expected victory. Alas, it was not to be.

In a result dubbed the “Miracle of Bern,” the nascent West German team beat Hungary, 3-2, in the final.

The 3fo green-and-brown stamps, showing a map of the world, national flag and an old-fashioned soccer ball, were scrapped.

An imperforate bottom-corner block of four was described by Spink as “quite possibly the only known” such piece for this unissued stamp.

Without gum and with only a trace of aging, this poignant vestige of Hungarian sporting glory went to a new owner for $2,860.

Even this humble postage due error tells an historical tale. The town of Zengg is now Senj, Croatia — another result of Hungary’s ever-shifting borders.

Also on June 15, Spink held one of its periodic Collector’s Series sales featuring stamps of the British Empire and other countries. The top bid went to a Canadian 12-penny Queen Victoria of 1851 (Scott 3).

This stamp is famous for having gone unappreciated during its time of use; only about 1,450 examples were sold.

The remainder of the print run, 51,000 stamps, was withdrawn and destroyed in 1857. Only later, as its rarity came to be recognized, did it become highly sought-after.

The unused, no-gum example offered by Spink shows skillful repairs to its right side. It sold for an impressive $37,475.