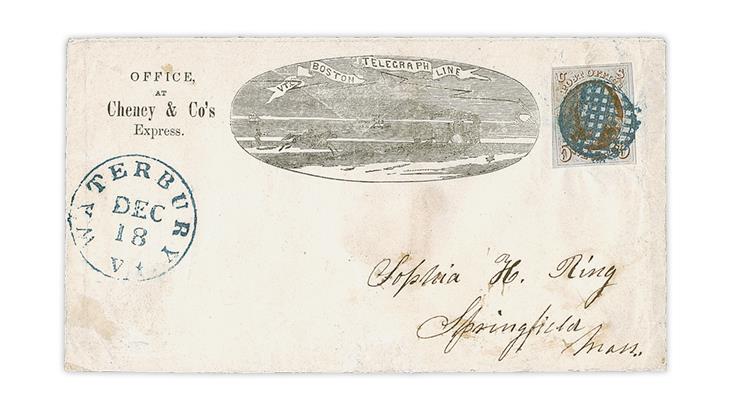 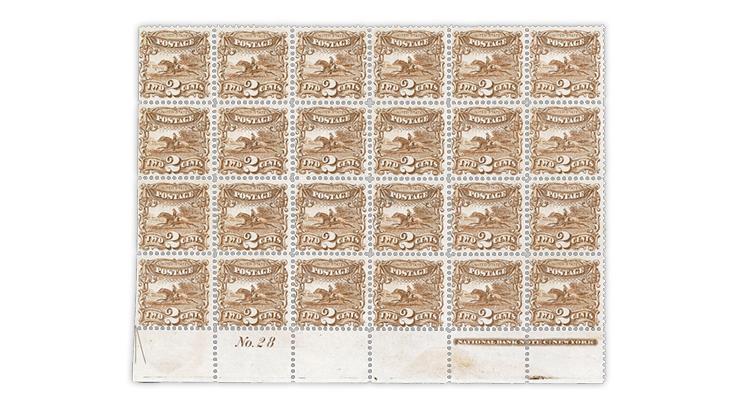 This bottom margin block of 24 of the U.S. 1869 2¢ Pictorial stamp will be up for bids during Siegel’s Sept. 28 sale of Stephen Rose’s specialized collection of this definitive stamp picturing a post horse and rider. 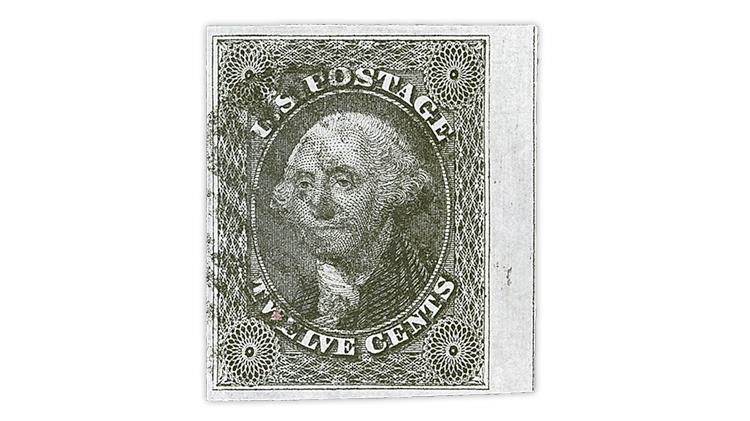 Siegel’s Sept. 29 auction of classic U.S. stamps and covers includes selections from the James A. Allen collection of the 1851-57 12¢ issues. Among the numerous examples of the 1851 12¢ Washington stamp to cross the auction block is this used single.
Previous
Next

Important collections formed by George J. Kramer, Stephen Rose, James A. Allen and an anonymous collector will be sold Sept. 28-29 by Robert A. Siegel Auction Galleries in New York City.

Previews of each of these collections are presented in the fall 2022 issue of the Siegel Despatch, which is published by Siegel and includes news and articles about the firm’s activities.

“The telegraph played an important role in postal communication,” Siegel said in its preview of the Kramer telegraph collection.

“George Kramer, the master of philatelic storytelling through exhibits, has spent decades acquiring significant examples of United States and Civil War Confederate covers with a connection to the telegraph.”

One of many standout items in the Kramer collection is an illustrated advertising cover for the Vermont and Boston Telegraph Line that is franked with an 1847 5¢ Benjamin Franklin stamp (Scott 1). The cover was postmarked Dec. 18, 1850, in Waterbury, Vt., and sent to Springfield, Mass.

In the catalog lot description, Siegel refers to this handsome cover as the highlight of the Kramer collection.

“Without question the greatest 1847 issue telegraph cover and arguably one of the most striking of all 1847 illustrated covers,” Siegel said.

The Vermont and Boston Telegraph Line design on the cover “illustrates ships, a train, post rider, postman and turtle, above which is a telegraphic lightning bolt connected to a hand and quill, the obvious implication being that the telegraph beats all other forms of communication,” Siegel said.

According to Siegel, the cover is the better known of two 1847 issue envelopes showing the Vermont and Boston Telegraph Line design. The other, which was discovered more recently, is originally from the Benjamin Franklin Bailar collection. Both are addressed to Sophia H. Ring.

The other Vermont and Boston Telegraph Line cover does not bear a Waterbury postmark, “but the use of pencil to cancel (and tie) the 5c [Franklin] stamp suggests it may have been carried outside the mails (by express) or by railroad,” according to Siegel.

The Vermont and Boston Telegraph Line cover in the Siegel sale, one of just two recorded 1847 5¢ covers with a Waterbury, Vt., postmark, has an impressive provenance, having once graced the collections of George C. Slawson, Paul C. Rohloff and Leonard Kapiloff.

A brief preview of the Stephen Rose collection of the 1869 2¢ Pictorial issue in the Siegel Despatch puts Rose’s efforts in perspective.

“Forming a specialized collection of one stamp is a daunting challenge,” Siegel said.

“Stephen Rose met that challenge and formed a spectacular award-winning exhibit collection of the 2¢ 1869 in all its varied forms—unused and used stamps, varieties, multiples, bisected use, domestic and foreign-mail covers, and the 1875 Re-Issues.”

One of the key unused multiples up for bids is a block of 24 showing the No. 28 plate number and full National Bank Note Co. New York imprint in the bottom selvage. A guide arrow is also visible in the selvage below the first stamp in the bottom row.

Of the 24 stamps, all of which have original gum, 16 are mint, never-hinged. The mint stamps include the entire second and third rows and the horizontal pairs at either end of the bottom row, Siegel said.

Siegel describes the block of 24, which once resided in the collections of William L. Moody III, John C. Chapin and William H. Gross, as “one of the best centered among the few in existence.”

A plate number block of 10 of Scott 113 is valued at $55,000 in the Scott Specialized Catalogue of United States Stamps and Covers. The value is italicized to indicate an item that trades infrequently in the philatelic marketplace.

“Jim Allen has made the black 12¢ Washington stamps issued from 1851 to 1860 his main focus of interest,” Siegel said in the Siegel Despatch preview of Allen’s impressive collection of 1851-57 12¢ issues. “Jim’s 12¢ exhibit won the Champion of Champions competition, and he has decided it is time to sell.”

Among the numerous examples of the imperforate 1851 12¢ George Washington stamp (Scott 17) that will cross the auction block is a wonderful used single with a wide right interpane selvage margin that just shows the centerline dividing the left and right panes of 100 in the original sheet of 200.

According to Siegel, the stamp is from position 70L1, which is philatelic shorthand for the 70th stamp (10th stamp in the sixth row) in the left pane of 100 printed from plate 1.

Siegel notes that the centerline “was not inscribed perfectly between the two panes, but rather closer to the right pane, as such centerline copies from the left pane are much scarcer because they require a larger sheet margin.”

Accompanying the stamp is a 2008 expertizing certificate from the Philatelic Foundation.

Siegel lists this handsome 1851 12¢ Washington stamp with a large right interpane margin at the Scott U.S. Specialized catalog value of $250. Given the stamp’s overall excellent condition, it likely will sell for noticeably more.

Collectors of classic-era first-day covers will want to give serious consideration to the July 1, 1851, FDC of the imperforate 1851 3¢ orange brown type 1 George Washington stamp (Scott 10) from the Houdon collection of the U.S. 1851-57 3¢ issues.

The cover bears a clear strike of a red “Boston 3cts 1 Jul” circular datestamp. According to Siegel, docketing inside the folded letter confirms the 1851 year date. A circular grid cancel just ties the stamp to the cover at left.

Separate catalogs have been prepared for the Kramer and Rose collections and for the classic U.S. stamps and covers sale featuring the Allen and Houdon collections. Full details of the auctions, including downloadable versions of the catalogs and online bidding options, are available on the Siegel website.