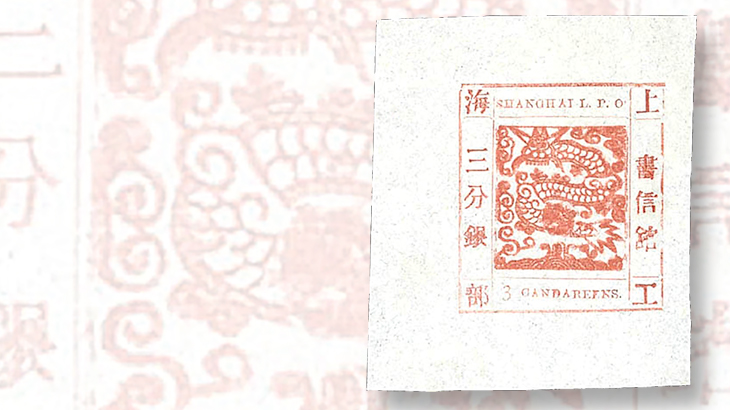 A scarce variety of the 1866 Shanghai local post Large Dragon stamp printed on laid paper sold for multiples of its presale estimate when auctioned during the Nov. 5-6 sale by Kelleher and Rogers in Hong Kong. 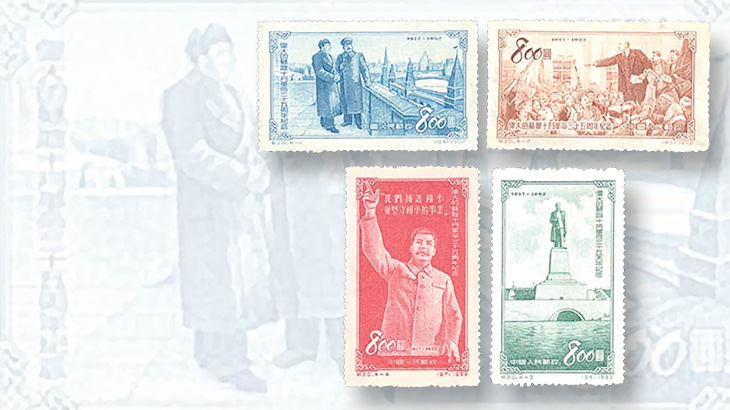 An unacceptable inscription resulted in this set of four stamps from the People’s Republic of China being quickly withdrawn in 1953. The unused set sold for $22,200 in the Kelleher and Rogers auction in November.
Previous
Next

Kelleher and Rogers held a sale of Chinese and other Asian stamps in Hong Kong on Nov. 5-6.

A Large Dragon stamp, issued in 1866 by the foreign-run Shanghai local post, was distinguished by having antique-style numerals, the denomination “candareens” as plural, and being printed on laid paper in a lovely shade of terra cotta (variety of Scott 28).

Called “a stellar example of this great rarity,” it tripled its presale estimate to bring the equivalent of $17,800, including the 15 percent buyer’s premium added by the firm.

The stamps were pulled back from sale because of an inaccuracy in the inscriptions: the use of the Chinese character for “Soviet.” The Soviet Union was not established until 1922, so referring to the 1917 revolution as “Soviet” was an embarrassing anachronism. The stamps were subsequently issued with revised inscriptions.

The unused error set, without gum as many early stamps from the People’s Republic were issued, sold for $22,200, while the used set, with a couple of small flaws, fetched $5,900.