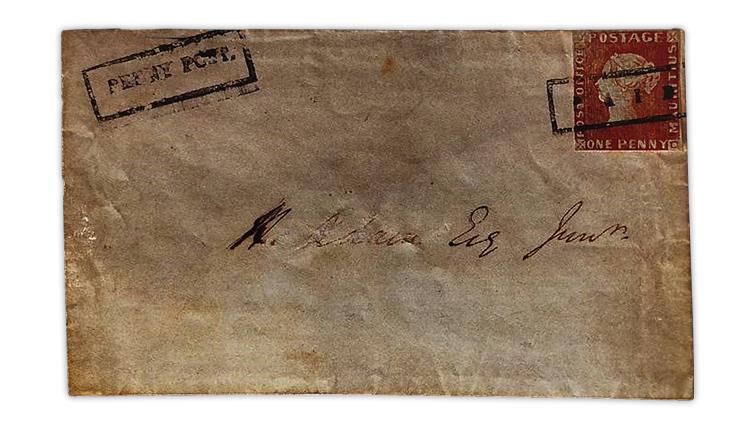 Figure 1. This 1847 cover bearing a prized Mauritius 1-penny orange Post Office stamp is being offered by the auction firm of Christoph Gaertner on June 26, with an opening bid of about $4.875 million. It once carried an invitation to a ball on the island 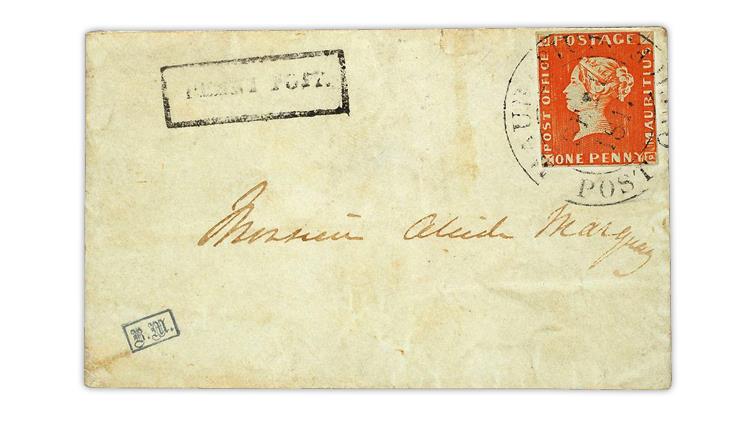 Figure 2. The other two surviving Mauritius Ball covers are in the Thomas Keay Tapling collection at the British Library and the Royal Philatelic Collection belonging to Queen Elizabeth II. Shown is the cover in the Tapling collection. Image courtesy of t 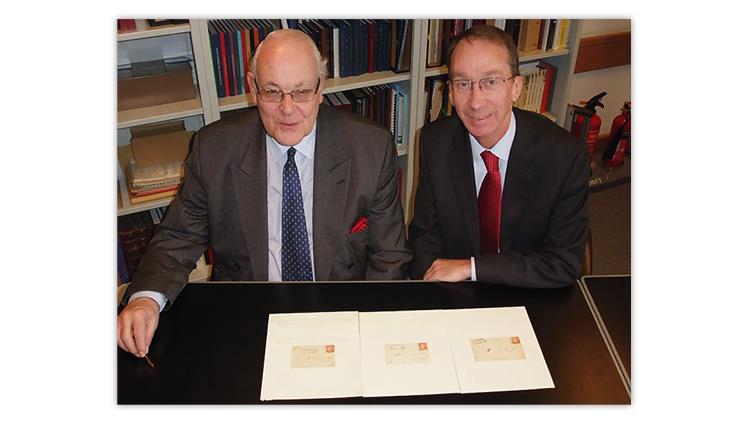 Figure 3. All three known Mauritius Ball covers were reunited for display at the British Library in 2011, under an exhibit organized by Michael Sefi (left), then the keeper of the Royal Philatelic Collection; David Beech (right), the library’s philatelic 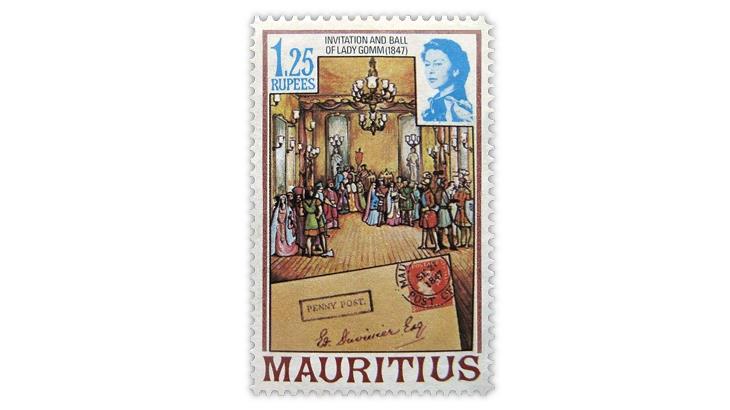 Figure 4. The Mauritius Ball cover from the Royal Philatelic Collection is depicted on a 1978 Mauritius commemorative stamp.
Previous
Next

One of the world’s most celebrated postal history rarities, a cover bearing an 1847 1-penny orange Post Office stamp from the Indian Ocean island of Mauritius (Scott 1), will be offered June 26 by the German auction house of Christoph Gaertner.

The sale of this iconic cover is part of Gaertner’s 50th auction series that will be held June 21-26 at the firm’s headquarters in Bietigheim-Bissingen, Germany.

The cover, shown in Figure 1, is offered with an opening bid of €4 million, or about $4.875 million in early June. A buyer’s premium of 23.8 percent would be added to any winning bid.

Although Gaertner has a strict policy of not revealing the names of consignors or buyers, the cover was owned in recent years by Vikram Chand, a wealthy collector who has also been a major supporter of the British Library’s philatelic collections and exhibits.

The David Feldman auction firm in Switzerland reported that it sold the cover privately several times over the years, including in 2006 for more than $3 million.

Addressed simply to “H. Adam Esq. Junr” with no street or town, the cover is one of three known bearing this rare stamp to have been sent locally around the time of issue, most likely containing an invitation to a Sept. 30, 1847, ball hosted by Lady Gomm, the wife of the governor of Mauritius.

The desire for stamps to post invitations to that ball, which was part of an effort to improve relations between the island’s French- and English-speaking inhabitants, supposedly provided the impetus for Mauritius’ first issue of 1d and 2d stamps (Scott 1 and 2).

These were the earliest stamps produced by any British colony.

Unlike subsequent issues of Mauritius that were inscribed “Post Paid,” the 1847 1d and 2d stamps read “Post Office” up the left side of the design. As such, they have always been referred to as the Post Office stamps.

They entered public consciousness as world-class philatelic treasures when King George V famously acquired a mint example of the 2d blue in the 1930s.

“Blue Mauritius,” the nickname of the 2d blue, remains a byword for any great rarity, inspiring the same reverence as a Rolls-Royce, champagne or the Ritz. All four surviving unused examples of the 2d blue are now in institutional collections.

The other two surviving Mauritius Ball covers reside in the Royal Philatelic Collection owned by Queen Elizabeth II and the Thomas Keay Tapling collection held at the British Library.

Like the cover addressed to Adam, they bear a name only, with no street or town. Figure 2 pictures the cover in the Tapling collection.

Although they are exhibited from time to time, those two covers are no longer available to be owned by the public, making the one now offered by Gaertner unique in private hands.

In 2011 Chand cooperated with the British Library to exhibit his Mauritius Ball cover, together with the other two, in a reunion organized by Michael Sefi, then keeper of the Royal Philatelic Collection, and David Beech, the library’s philatelic curator.

The Mauritius Ball cover addressed to Adam was also exhibited in 2011 in Berlin. Sefi and Beech, posing with the trio of covers, are shown in Figure 3.

The story of the Mauritius Post Office stamps is filled with romance and intrigue. Blue Mauritius: The Hunt for the World’s Most Valuable Stamps, a 2006 book by Helen Morgan, an Australian art historian and archivist, tells their tale in highly readable fashion with great detail.

Amazingly, the Post Office issue was unknown to philately until the 1860s, when the first examples began turning up in the French port city of Bordeaux, which had extensive shipping connections with Mauritius during the 19th century.

At first, many presumed the stamps were either errors of the Post Paid issues, some kind of unissued essay or downright bogus.

It was only after much sleuthing turned up sufficient corroborating evidence, and an expedition to Mauritius by a well-known British philatelist, Maj. Edward B. Evans, who found further examples as well as archival records relating to their production, that they were accepted as genuine.

Remarkably, every single one of the 27 surviving Mauritius Post Office stamps, on and off cover, has a fully documented provenance going back to its original discovery, and the listing of these pedigrees alone is a worthwhile reason to buy Morgan’s book.

The Mauritius Ball cover addressed to Adam was sold by the addressee himself to a Parisian dealer named Theophile Lemaire in 1899. By way of British dealer W.H. Peckitt, the cover passed first to the famous collector Henry Duveen, for a little more than £1,000, and about a decade later to a Dutch collector named Henry Manus.

It was auctioned in 1933 and shortly thereafter found its way into the collection of King Carol II of Romania, who, like King George V (his first cousin, once removed), was an ardent philatelist of no modest means.

In 1950 it was sold privately through Harmer, Rooke and Co. to a Belgian collector, Rene Berlingin. At the 1971 Anphilex show marking the 75th anniversary of the Collectors Club in New York, it was auctioned by Stanley Gibbons, where it was purchased by Hiroyuki Kanai for $174,000.

Kanai later consigned the famous cover along with the rest of his Mauritius collection to Feldman. Between 1988 and 1997, Feldman resold the cover three times for prices rising to more than $1.5 million.

In 1978, the Ball cover from the Royal Philatelic Collection was depicted on a Mauritius 1.25-rupee commemorative stamp (Scott 456), shown in Figure 4.

Further information about Gaertner and the firm’s June 26 auction is available online, or by writing to Christoph Gaertner, Steinbeisstr. 6+8, D-74321 Bietigheim-Bissingen,
Germany.