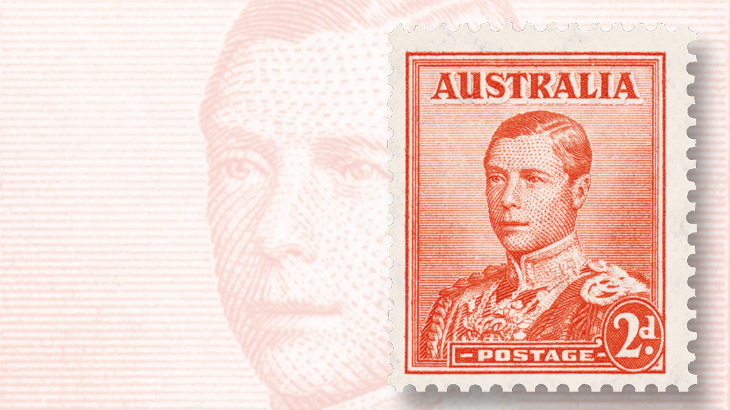 Only six unissued 2-penny scarlet Edward VIII stamps from Australia are known to exist. This example, which has two attached margin pieces that have been digitally cropped, will be auctioned by Mossgreen June 26. The full piece with attached margin is pictured on page 18. 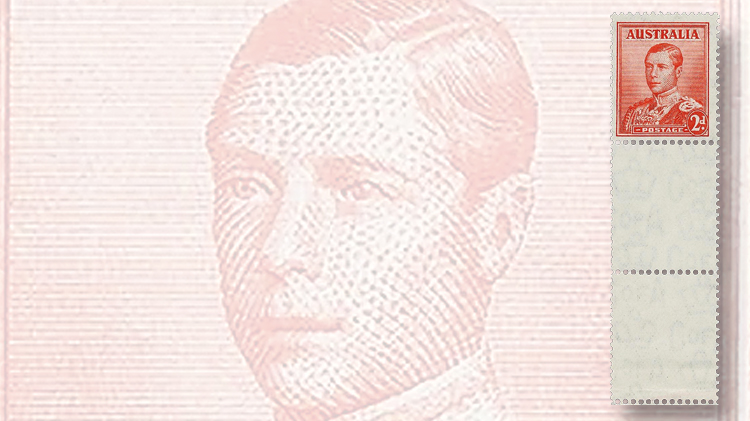 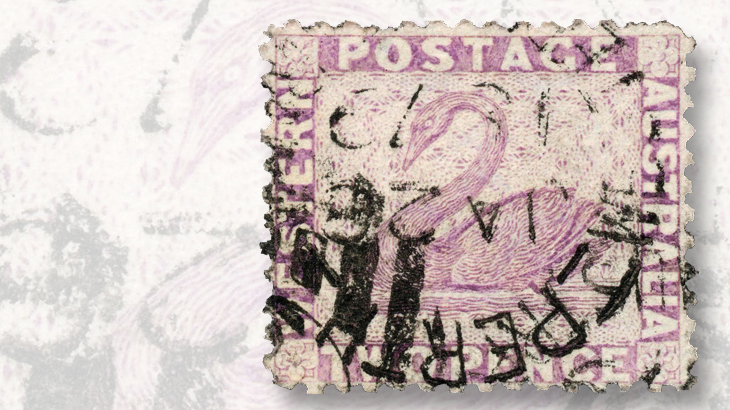 Mossgreen will offer this used Western Australia 1879 2-penny lilac Swan error of color with dated cancel during its June 26 auction.
Previous
Next

The featured stamp in the June 26 public auction from Mossgreen is an Australian rarity printed to honor a new king in 1936, but urgently withdrawn before the stamp was ever issued.

For the United Kingdom and the British Empire, 1936 is known as the year of the three kings. King George V had died on Jan. 20, and was succeeded by his eldest son, who became King Edward VIII.

But Edward’s love for American divorcee Wallis Simpson led to his abdication on Dec. 11 so that he and Simpson could marry unhindered.

As the turmoil of Edward’s situation developed during the year, Australia’s government printer, John Ash, was preparing a definitive stamp series to honor the new king. But before the stamps were issued, Edward stepped down, and the decision was quickly made to scrap the run of stamps already printed.

But there was a problem.

Lord Huntingfield, the governor of Victoria, had received a sheet of 2-penny scarlet King Edward VIII stamps as a gift from the printer, and while he returned the sheet when requested to do so, it came with six stamps absent that had been removed and sent as a gift to England, and which could not be recovered.

“The Huntingfield sheet, along with all related stamps and production artefacts, was destroyed,” Mossgreen Auctions observed. “There is not even a single example in the Australia Post Archival Collection.”

But the block of six stamps surfaced 60 years later, and two stamps were removed, leaving a corner block of four that was auctioned in 2014.

One nonmarginal mint single sold in 2016 for $172,912 in Australian dollars, described by the Scott Standard Postage Stamp Catalogue as then equivalent to US$123,600.

The second single mint stamp, with two attached stamp-size pieces of perforated blank margin in a vertical strip, will be auctioned by Mossgreen with an estimate of $120,000 Australian (roughly US$90,520).

The piece is described as “hinged at the base of the margin only otherwise unmounted.”

Though it is unissued, the stamp is illustrated and described in both the Scott Standard catalog and the Scott Classic Specialized Catalogue of Stamps and Covers 1840-1940.

The Mossgreen auction of stamps and postal history includes a significant run of material from the Commonwealth of Australia and Australian states, along with military postal history and prisoner-of-war covers.

The auction also offers a used example of the well-known 1879 Western Australia 2d lilac Swan error of color (Scott 31a; described as mauve by Mossgreen and the Stanley Gibbons catalog).

The stamp has an 1879 Perth duplex cancel, and is identified by Mossgreen as one of only four dated examples that have been recorded.

The used lilac Swan is valued in the Scott Classic Specialized catalog at US$17,500. This example is listed by Mossgreen with an estimate of $15,000 Australian (US$11,300).

A selection of New Zealand stamps, multiples and postal history includes a number of varieties and classic issues.

A die proof on glazed white card of New Zealand’s 1909-27 Penny Dominion 1d issue is among the items on offer.