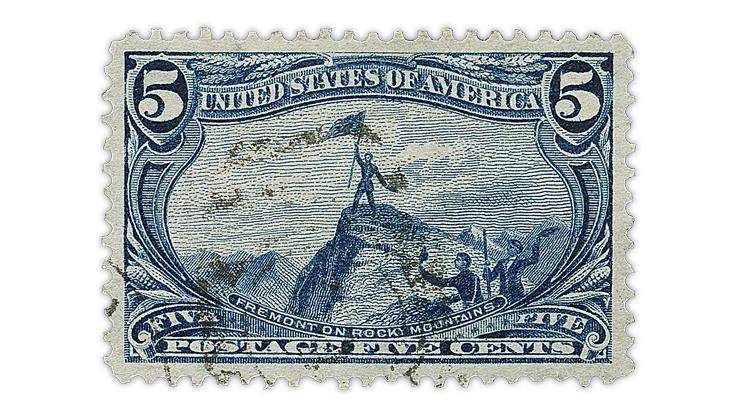 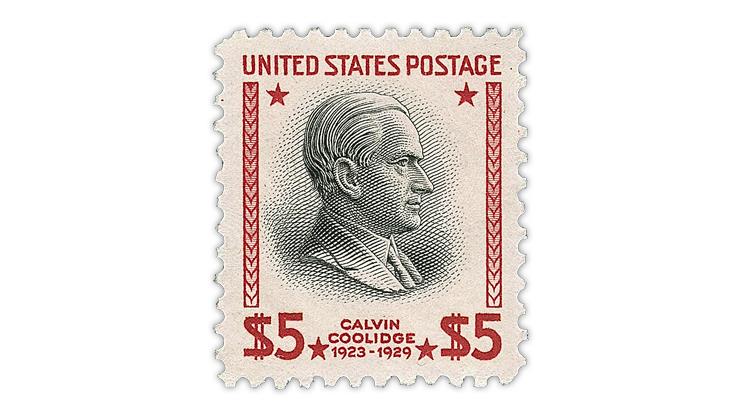 Up for bids in the Siegel auction of the Myerson collection is this mint never-hinged $5 Calvin Coolidge stamp from the popular 1938 Presidential definitive series. In 2008 PSE assigned the grade of superb 98 to the stamp.
Previous
Next

Collectors seeking to acquire United States 19th-century and early 20th-century stamps in outstanding condition will have numerous opportunities during a sale to be held Feb. 9-10 by Robert A. Siegel Auction Galleries in New York City.

The 832 lots of the James P. Myerson collection of superb U.S. stamps will be offered in four sessions during the two-day Siegel auction. The two sessions on each day of the sale will begin at 10:30 a.m. and 1:30 p.m. Eastern Time.

Due to restrictions because of the COVID-19 pandemic, attendance will be limited and by prior approval from Siegel. Live bidding will be by email, telephone or internet.

In his introduction to the sale, Siegel president Scott Trepel whets bidders’ appetites for the philatelic feast to come: “The collection offered in this catalogue comprises 19th century issues in used condition, and 20th century and back-of-book issues in original-gum condition (most Mint Never Hinged). There are hundreds of stamps certified in grades of 95 or higher, and quite a few rank at the top of the P.S.E. [Professional Stamp Experts] Population Report.”

The two sessions on Feb. 9 feature all significant commemorative and definitive issues, starting with the nation’s first issue of postage stamps, the 1847 5¢ Franklin and 10¢ Washington (Scott 1-2), and continuing through the 1913-15 Washington-Franklin issues.

Collectors on the lookout for well-centered used stamps will be pleased with many of the stamps from the Myerson collection that will cross the Siegel auction block.

One exceptional example is a used 1898 5¢ Trans-Mississippi stamp (Scott 288) with a light oval registry cancellation. The 2011 and 2013 Professional Stamp Experts certificates accompanying the stamp assign it a grade of superb 98. Siegel says “this is the highest grade awarded and it is shared by only three others.”

Siegel describes this used 5¢ Trans-Mississippi as “a superb stamp in every respect” and emphasizes the stamp’s “beautifully balanced margins” and its “deep rich color on fresh paper.”

Siegel is offering this stamp at the Scott catalog value of $25 for a stamp in the grade of very fine. Given the stamp’s high grade and overall condition, it is likely to sell for substantially more than that amount.

A used 5¢ Trans-Mississippi in the grade of superb 98 is valued at $1,150 in the Scott Stamp Values section of the 2021 Scott Specialized Catalogue of United States Stamps and Covers.

The first session on Feb. 10 will open with a strong selection of 1916-17 regular issues and continue through the regular and commemorative issues of 1922-38.

Among the four lots of 1938 Presidential series stamps is a marvelously centered, mint never-hinged example of the $5 Calvin Coolidge (Scott 834), the top denomination in the popular definitive series known to collectors as the Prexies.

A 2008 PSE graded superb 98 certificate accompanies this $5 Coolidge stamp, which Siegel describes as an “extremely fine gem.” Siegel also points out that the $2 and $5 Prexies “are extremely difficult to find in high grades without guidelines showing on the perfs.”

Featured in the second session on Feb. 10 are 35 lots of modern errors, along with airmail, special delivery, postage due, offices in China, Official, parcel post and federal hunting permit (duck) stamps.

The sale will conclude with 13 balance lots from the Myerson collection. Among the more interesting of these is a collection of Washington-Franklin shade varieties.

Siegel describes this balance lot as a “Beautiful collection on computer-made pages, clearly identified by Scott number, between one and eight examples of each with denominations to $5.00, most are subtle variations, some may correspond to Scott Catalogue sub-listings but the point is that they demonstrate the wide variety of shades these issues can come in.”

Siegel is offering this Washington-Franklin reference collection with an estimate of $4,000 to $5,000 and notes in its description a total Scott catalog value exceeding $10,000. The stamps, as mounted on Myerson’s pages, are shown on the Siegel website.

A single catalog has been prepared for the Myerson collection sale. Full details of the auction, including a downloadable version of the catalog and online bidding options, are available on the Siegel website.