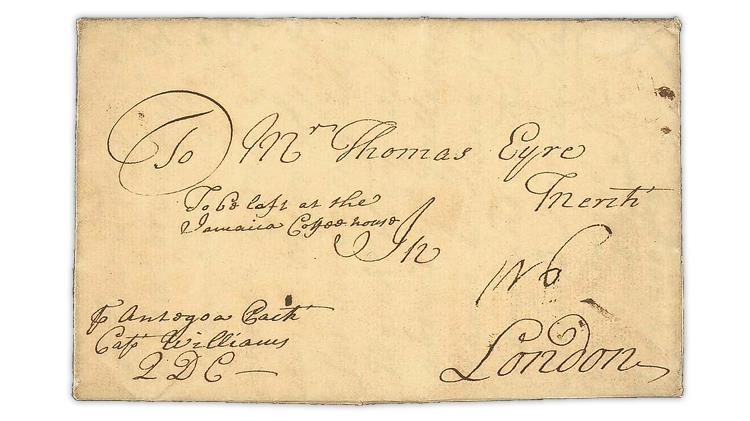 Spink’s July 14 auction of part 2 of the Dubois collection of Jamaica postal history and stamps includes this handsome 1705 stampless letter sent from Jamaica to London via the Dummer packet service. The sender wrote on the front that the letter was “to b 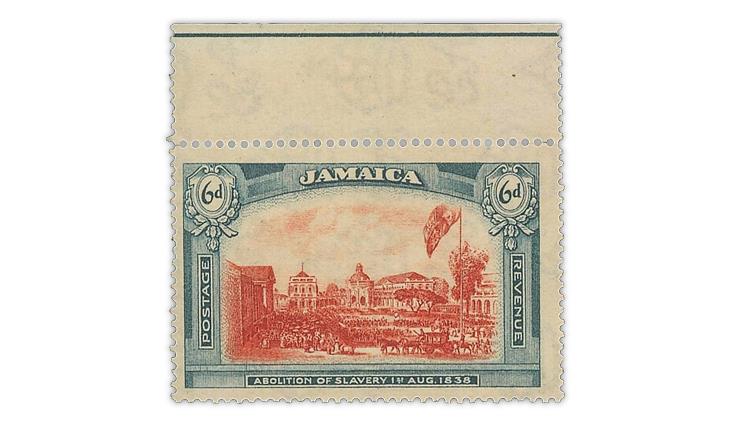 This unissued 1921 6-penny stamp commemorating the abolition of slavery in Jamaica is offered in the July 14 Spink sale of the Dubois collection. It one of just eight examples of the stamp without a “specimen” overprint available to collectors.
Previous
Next

Collectors of Jamaica will have numerous opportunities to add desirable items to their holdings when Spink offers the second part of the Dubois collection of Jamaica postal history and stamps.

The 685-lot sale opens with an impressive selection of early stampless covers sent from Jamaica to various destinations. Among these are several that were carried via the famed Dummer packet service.

Spink provides the following brief summary about the man for whom the packet service was named:

“Edmund Dummer, Surveyor-General of the Navy, obtained agreement to operate the first Packet Service in the West Indies from October 1702. Over-optimism regarding revenue, and the loss of ships by enemy action and storms, led to the end of the venture by December 1711, when Dummer was finally forced into bankruptcy. Dummer died in April 1713.”

One of the Dummer covers was sent Dec. 5, 1705, to merchant Thomas Eyre in London. According to Spink, the cover was sent at the single-rate franking of 1 shilling, 6 pence that was “introduced in the latter half of 1704.”

Spink notes that a clear Bishop mark is visible on the back of the cover. Named for Henry Bishop, the Bishop mark is considered the earliest postmark. Bishop marks were used to indicate the month and day that a letter was received by a post office.

The cover was carried aboard the Antegoa under the command of Thomas Williams. The ship “was in the service of Edmund Dummer from 1705 until she was captured on her sixth voyage in 1708,” according to Spink.

The sender docketed the front of the cover with specific instructions that the letter was “to be left at the Jamaica Coffee House” in London.

One of the more desirable and controversial stamps in the Dubois collection sale was prepared but never issued.

The 1921 6-penny stamp was printed for the 1919-21 series and commemorated the abolition of slavery in Jamaica that became effective Aug. 1, 1834. Slaves were granted complete freedom on Aug. 1, 1838, the date inscribed below the vignette that depicts the main square in Spanish Town, Jamaica.

In its description of the stamp, Spink states, “The governor at the time of issuance, Sir Leslie Probyn, feared the stamp’s subject, the Abolition of Slavery, might be controversial and all examples of the stamp were ordered to be destroyed. By the time the order was made the stamps with Specimen overprints had already been distributed through the U.P.U. [Universal Postal Union], resulting in several examples being in the market place today.”

The top margin single in the Spink sale is one of just eight 6d Abolition of Slavery stamps without a “specimen” overprint available to collectors, according to Spink. Four of these were printed on paper with the multiple crown and CA watermark (Scott watermark 3). The other four, including the one in the Dubois collection, are on paper with the multiple crown and script CA watermark (4).

Spink notes that two intact blocks of four, one on watermark 3 paper and the other on watermark 4 paper, reside in the Royal Philatelic Collection.

An unissued 6d Abolition of Slavery stamp without “specimen” overprint and printed on watermark 4 paper is valued at $40,000 in the Scott Classic Specialized Catalogue of Stamps and Covers 1840-1940.

A detailed catalog for the Dubois collection of Jamaica postal history and stamps is available as a downloadable PDF document. Online bidding options are available after registering in advance with the firm.