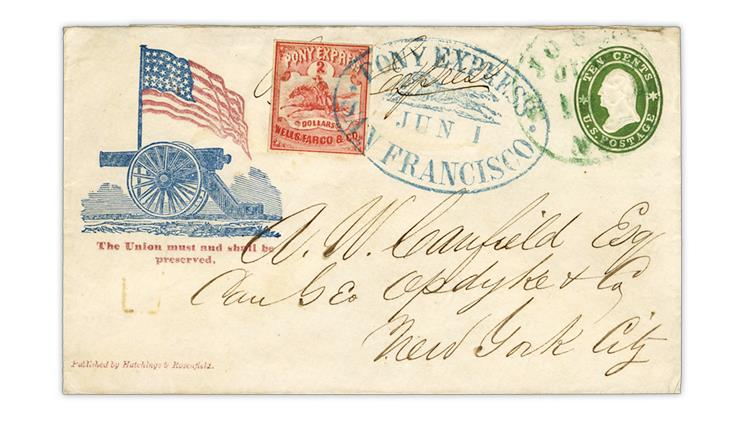 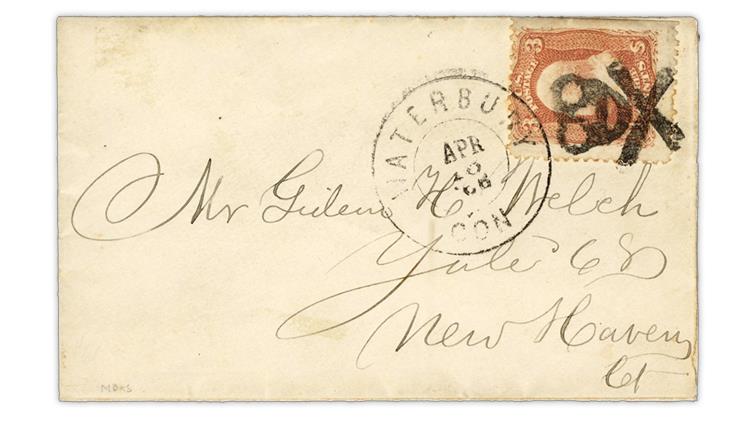 Among the 17 Waterbury fancy cancellation covers in the Jan. 17 H.R. Harmer auction is this 1866 cover mailed from Waterbury, Conn., to New Haven, Conn., bearing a crisp strike of the type 1 Skull and Crossbones cancel. 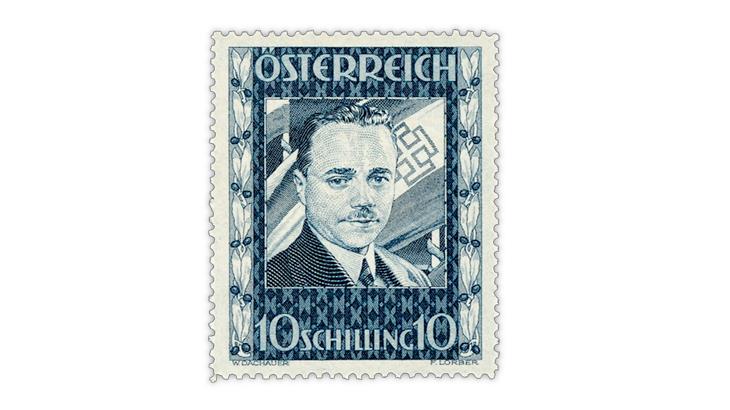 On Jan. 17, H.R. Harmer will offer the eighth part of the massive Erivan collection of United States and Confederate States postal history.

The 141-lot auction will take place at 2 p.m. Eastern Time at the firm’s gallery in New York City.

H.R. Harmer will hold an online-only general sale of U.S. and worldwide stamps, covers and collections on Jan. 18. That auction, which features 558 lots, is scheduled to begin at 10 a.m.

In a preface to the Erivan auction catalog, H.R. Harmer president Charles Epting whets bidders’ appetites for what is to come by highlighting two covers.

“Several covers in particular in this catalogue are the apotheosis of philatelic beauty in my mind,” Epting said.

“Take the New Haven provisional envelope (Lot 2), of which every other surviving specimen is faded or repaired. The envelope is rare, yes, but more importantly it is vibrant and colorful and immediately draws the viewer in,” he said.

“Another perfect example is the ‘Patriotic Pony’ cover (Lot 56), whose verdant greens and blues and reds make it a veritable work of art. The fact that it represents the intersection of two of America’s defining moments — the Pony Express and the Civil War — only enhances its desirability.”

Also included in the catalog is a brief biography of Haub that introduces readers to his numerous philatelic accomplishments.

The 1845 5¢ red New Haven, Conn., postmaster’s provisional cover on light bluish paper (signed by Postmaster Edward A. Mitchell in black ink, Scott 8XU2) that Epting mentions in the catalog preface is a standout rarity of the U.S. provisional period.

“This rarity is compounded by the fact that the ink used to produce the original envelopes has not stood the test of time, and all surviving covers except for this one are either faulty or restored,” H.R. Harmer said.

The New Haven postmaster’s provisional is not an adhesive stamp. Rather, it is an imprint from a brass handstamp that was applied in the upper right corner of the envelope.

H.R. Harmer notes that the cover has appeared in Linn’s Philatelic Gems II, published in 1985, and in the eight-page color photo feature titled “World’s Rarest Stamps” in the May 3, 1954, issue of Life magazine.

Scott 8XU2 is valued at $125,000 in the Scott Specialized Catalogue of United States Stamps and Covers.

A footnote to the listings for the New Haven postmaster’s provisional reads in part: “All New Haven envelopes are of equal rarity (each is unique), with the exception of No. 8XU2, of which two exist. An entire of No. 8XU2 is the finest example known, and this is reflected in the value shown.”

H.R. Harmer is offering this 1845 5¢ red New Haven, Conn., postmaster’s provisional cover on light bluish paper with a starting bid of $50,000. The cover, which last appeared at auction in 1989, comes with a 2022 Philatelic Foundation certificate.

Despite its short life (18 months between April 1860 and October 1861), the Pony Express is a critical source of some remarkable postal history.

One such cover with great eye appeal is a U.S. 10¢ green Washington Star die envelope (Scott U32) franked with an 1861 $2 red Wells, Fargo & Co. Pony Express stamp (143L1). That stamp is tied to the envelope by a clear, complete June 1 (1861) strike of the blue San Francisco Running Pony handstamp.

A green postmark over the Washington stamp imprint shows the cover entered the U.S. mails on June 13, 1861, in St. Joseph, Mo., the eastern terminus of the Pony Express.

To the left of the stamp is a Hutchings & Rosenfield patriotic cachet featuring a U.S. flag, cannon and the words, “The Union must and shall be preserved.”

H.R. Harmer notes that the cover is one of three recorded Pony Express patriotic envelopes and is “one of the most extraordinary and beautiful pieces of postal history in existence.”

The Scott U.S. Specialized catalog values Scott 143L1 on a Scott U32 patriotic cover at $100,000, with the value italicized to indicate an item that trades infrequently in the philatelic marketplace.

The cover comes with a 2022 Philatelic Foundation certificate and is listed as No. E89 in the Frajola-Walske-Kramer census of Pony Express covers. The E prefix indicates the cover was carried on an eastbound trip from Sacramento, Calif., to St. Joseph.

Fancy cancellations rank among the most popular collecting areas of classic U.S. philately. Within this field, the cancels produced by Waterbury, Conn., Postmaster John W. Hill have achieved legendary status and are eagerly sought after.

A cover mailed from Waterbury to New Haven, Conn., on April 13, 1866, bears a bold strike of the type 1 Skull and Crossbones cancel that ties the 1861 3¢ rose Washington (Scott 65) at right and bottom. The stamp, which is also tied to the cover by the postmark, paid the first-class letter rate.

According to H.R. Harmer, only 11 covers bearing this Waterbury cancel are recorded in the unpublished census maintained by William T. Crowe.

Collectors who still need this key Austrian issue will have the opportunity to bid on a mint, never-hinged example in H.R. Harmer’s Jan. 18 general sale.

H.R. Harmer describes the stamp as very fine and fresh and states that it has been signed by and is accompanied by a 1985 certificate from Bruno Savarese Oliva.

Against a Scott catalog value of $1,100, H.R. Harmer lists this mint, never-hinged Austria 10s Engelbert Dollfuss stamp with a starting bid of $150.

The catalog for the sale of part 8 of the Erivan collection and the online general auction listings of U.S. and worldwide material are posted on the H.R. Harmer website. The Erivan catalog is downloadable, and online bidding options are available for both sales.