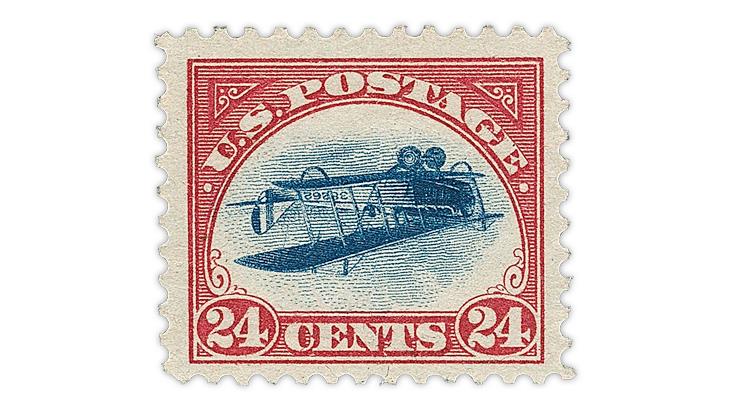 Robert A. Siegel Auction Galleries will auction this mint, never-hinged invert error of the United States 1918 24¢ Curtiss Jenny airmail stamp in a March 31 sale at the firm’s gallery in New York City. This Jenny Invert is from position 77 in the pane of 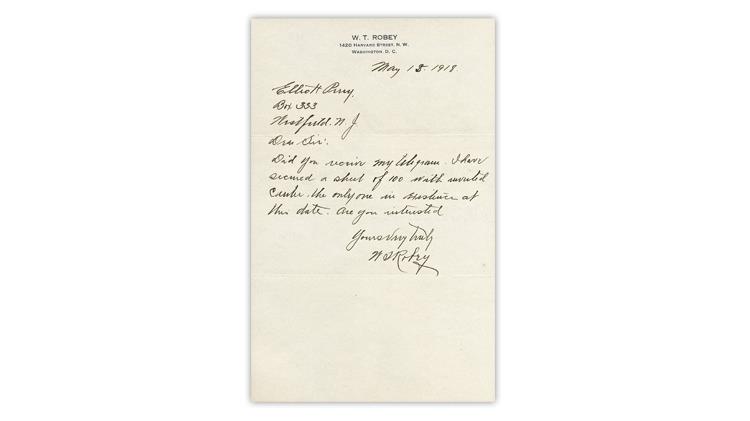 Siegel’s March 31 auction also offers 11 items from the correspondence of Robey, including a May 15, 1918, letter to New Jersey stamp dealer Elliott Perry in which Robey announces, “I have secured a sheet of 100 with inverted center, the only one in exist
Previous
Next

The Jenny Invert in the Siegel sale is from position 77, the seventh stamp in the eighth row of the pane of 100 that was discovered and purchased by William T. Robey on May 14, 1918.

This invert stamp is from the impressive collection of American businessman Gerald Forsythe, who purchased the error stamp for $576,000 at a 2014 Spink USA sale.

Lightly penciled on the back of the stamp is “77.” Dealer Eugene Klein of Philadelphia wrote the position number in pencil on the back of every invert stamp in the discovery pane after he purchased it from Robey.

Siegel draws attention to the stamp’s wide margins and “exceptional freshness” and asserts that it is “without question one of the finest examples in existence,” in the description of the lot in the auction catalog.

A mint, never-hinged Jenny Invert in very fine (grade 80) condition is valued at $850,000 in the 2021 Scott Specialized Catalogue of United States Stamps and Covers.

Siegel does not provide an estimate for the position 77 Jenny Invert but notes that the stamp is being sold subject to an undisclosed reserve. If bidding does not surpass the reserve amount, the stamp will not be sold.

Siegel also provides a capsule summary of Robey’s purchase of the pane of 100 Jenny Invert stamps and the events that followed:

“The original sheet of one hundred Inverted Jenny errors was purchased by William T. Robey on May 14, 1918, the first day the stamps went on sale in all three principal airmail route cities: Washington, D.C., New York and Philadelphia. Robey bought the sheet for its $24 face value at the New York Avenue Post Office window in the District of Columbia. On Sunday, May 19, Robey agreed to give Eugene Klein, a prominent Philadelphia stamp dealer, a one-day option to buy the sheet for $15,000. Klein exercised his option on Monday, May 20, in a late afternoon phone call, and he confirmed it with a registered letter to Robey sent in the evening mail. The sheet was delivered to Klein’s office by Robey and his father-in-law on the following day, Tuesday, May 21, 1918.

“No later than Monday, May 20, the day Klein exercised his option, he had arranged to sell the sheet for $20,000 to Colonel Edward H. R. Green. Half of the $5,000 profit went to Klein’s partners, Percy McGraw Mann and Joseph A. Steinmetz. Klein was then authorized by Colonel Green to divide the sheet into singles and blocks, and to sell all but a few key position blocks.”

The Siegel catalog also provides a detailed history of the development of airmail service in the United States, the production of the 1918 24¢ Curtiss Jenny airmail stamp (Scott C3) and Robey’s historic discovery of the Jenny Invert. In this respect, the catalog also serves as a useful reference.

The correspondence of Robey offered in the March 31 Siegel sale is from the collection formed by Drs. Joanne and Edward Dauer.

Leading off the 11 lots of Robey letters is the single-page missive he sent to dealer Elliott Perry of New Jersey announcing his discovery of the Jenny Invert pane.

“Did you receive my telegram. I have secured a sheet of 100 with inverted center, the only one in existence at this date. Are you interested.

On the back of the letter (not shown) are various notations by Perry, including a draft reply to Robey that he did not send.

“Perry’s pencil notes on the letter include the names of dealers — Percy Mann, Stanley Gibbons, Percy Doane and Wendover Neefus — probably because Robey said he intended to offer the sheet to them,” according to Siegel.

The original mailing envelope bearing Robey’s corner card (return address) is included with the letter. The envelope was postmarked May 15, 1918, in Washington, the same day Robey wrote the letter to Perry.

Siegel is offering this important artifact of the Jenny Invert and Robey’s role in its discovery with an estimate of $10,000 to $15,000.

A single catalog has been prepared for the sale of the position 77 Jenny Invert and the Robey correspondence. Full details of the auction, including a downloadable version of the catalog and online bidding options, are available on the Siegel website.