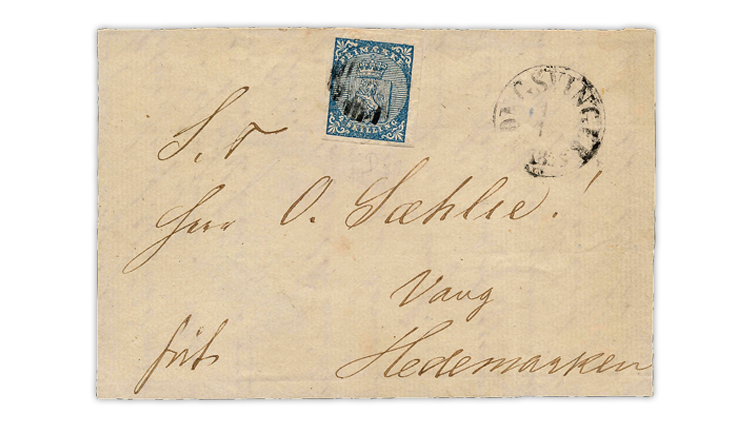 One of two known first-day covers for Norway’s first stamp issue, the 1855 4-skilling blue, will be offered during the March 29-30 Postiljonen auction.

The March 29-30 auction from the Swedish firm Postiljonen offers an extensive selection of material from Scandinavia, but also includes stamps and covers from the rest of Europe and around the world. The public auction is taking place at Oresundshuset, Hans Michelsensgatan 9, in Malmo, Sweden.

The auction is presented in two catalogs: a general sale that features stamps and postal history of Scandinavia and worldwide, and a specialized catalog for part 6 of the Gummesson grand prix d’honneur collection of Finland.

The general sale opens with hundreds of lots of material from Denmark, Faroe Islands, Greenland and Iceland before moving to Norway, worldwide, Sweden and Finland.

Each part of the auction has its own delights. The Norway offerings include one of the two known first-day covers of the country’s first stamp, the 4-skilling blue (Scott 1) issued Jan. 1, 1855. This example is a cover front with the stamp marked in black by a grid postmark. The front also shows a “KONGSVINGER 1.1 1855” postmark at upper right, according to the auction house. It is listed by Postiljonen with a starting price of €10,000 (approximately $11,210).

A Gummesson collection rarity from Finland is the 1858 Rancken cover, franked with six of the 1856-58 5-kopeck blue with small pearls (Scott 1) including a strip of five, the largest unit recorded.

The Postiljonen catalogs can be viewed online, and a PDF version is available at www.postiljonen.se. For more information, contact Postiljonen AB, Box 537, SE-201 25 Malmo, Sweden.