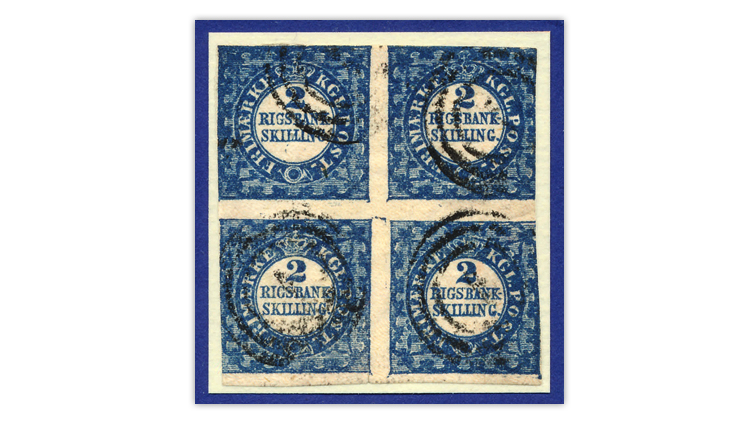 This used block of four from the Thiele printing of Denmark’s 1851 2-rigsbankskilling blue stamp is shown here on a passe-partout mounting, as illustrated in the latest Postiljonen auction catalog. The rare block will be auctioned April 3-4 at the auction
Due to ongoing concerns regarding the coronavirus COVID-19 outbreak, this Postiljonen auction has been postponed to May 14-15.

An important Danish stamp rarity is among the offerings in the upcoming public auction by the Postiljonen firm in Malmo, Sweden.

Collectors will bid on the only known used block of four of Denmark’s 1851 2-rigsbankskilling blue (Scott 1) during the April 3-4 sale. The block is from the Thiele printing, plate II, with each stamp lightly canceled with the three-ring numeral 1 (Copenhagen) postmark.

The block was formerly in the collections of Gene Scott and Peer Lorentzen, top international exhibitors whose respective collections of Denmark won back-to-back American Philatelic Society Champion of Champions competitions in 1990 (Scott) and 1991 (Lorentzen).

With this prominent block in his exhibit, Lorentzen would win large gold and the grand prix national prize at the 2001 Hafnia exhibition in Copenhagen.

The block is closely trimmed on three sides with a margin at the bottom, and is currently mounted “in the same type of passe-partout that was used by Gene Scott as well as by Peer Lorentzen,” Postiljonen notes.

“The block had been hidden away for about a century in a childhood collection in North-Western Denmark when it came on the market at an auction in 1985,” according to the auction firm.