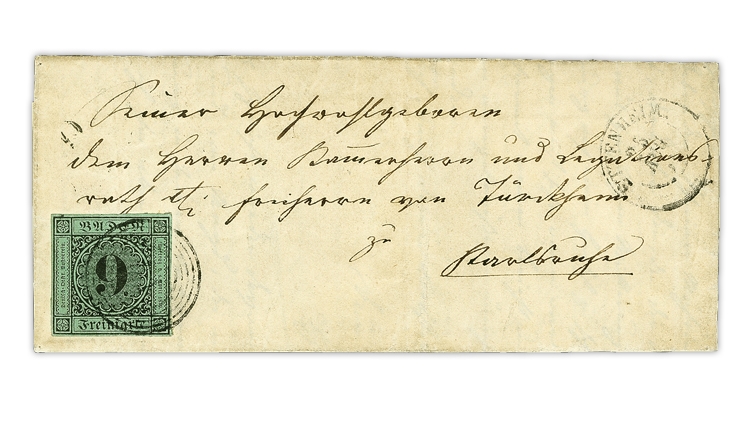 This rare 1851 cover franked with the Baden 9-kreuzer black printed in error on blue green paper was sold in the June 8 Heinrich Koehler auction.

A rare cover franked with an error stamp from the old German state of Baden was auctioned in Germany.

The cover was included in the June 8 Heinrich Koehler sale of material from the extensive collection of German-born businessman Erivan Haub.

Franked with the 1851 Baden 9-kreuzer black stamp erroneously printed on blue green paper instead of the intended rose paper (Scott 4b), the cover was listed by Koehler with an opening bid of €800,000.

The cover on offer was mailed in 1851 from Ettenheim to Karlsruhe and was previously owned by three eminent figures in philately: Philipp la Renotiere von Ferrary, Alfred Caspary and John R. Boker Jr.

The Erivan collection is being auctioned by Koehler and two other firms in the Global Philatelic Network group: H.R. Harmer in New York and Corinphila Auctions in Zurich, Switzerland.

The collection altogether will be offered in more than 30 auctions over the course of the next five years, according to Dieter Michelson and Karl Louis, the managing directors of Koehler and Corinphila Holding.