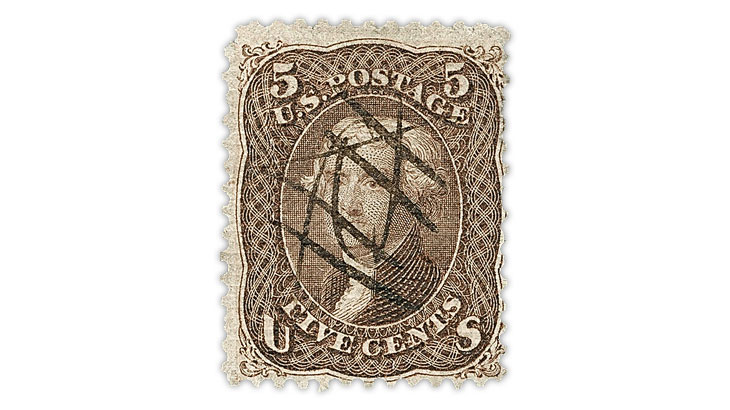 Only four examples are known of the United States 1867 5¢ brown Thomas Jefferson stamp with A grill, and all four are used. This example sold for $401,200 at the Dec. 12 Robert A. Siegel auction in New York City.

The Dec. 12 Robert A. Siegel auction of the Richard Drews collection of United States 1861-68 issues offered many important stamps, essays and proofs of that turbulent era, including one of the top U.S. stamp rarities.

As reported in the Dec. 10 Linn’s Stamp News on page 1, the star of this sale was a used example of the 1867 5¢ brown Thomas Jefferson stamp with A grill (Scott 80), one of just four known examples of what Siegel has described as “one of the rarest stamps in United States philately.”

All four examples in the Siegel census of this stamp are used.

Valued in the 2019 Scott Specialized Catalogue of United States Stamps and Covers at $260,000 (with the figure in italics because it is difficult to value accurately), the stamp in the Drews collection was hammered down at $340,000 in the New York City sale.

Despite the application of the all-over A grill, a type of patterned paper embossing that could sometimes damage the stamp’s perforations, the stamp in the Drews collection sports “perforations in far better condition than normally seen,” Siegel noted, making it a particularly appealing example for a collector.

The stamp is marked with a manuscript cancel of crisscrossed lines. A small corner crease exists at top right, and Siegel also pointed out the existence of “small internal paper breaks at center caused by combination of grill and manuscript” that were not mentioned on the accompanying certificate.

The Siegel firm had made headlines less than a month before with the Nov. 15 auction of the Position 49 1918 Jenny Invert stamp (Linn’s, Dec. 3, page 1). The mint never-hinged airmail error, graded extremely fine 90 by the Philatelic Foundation earlier this year, sold for a record $1.593 million.