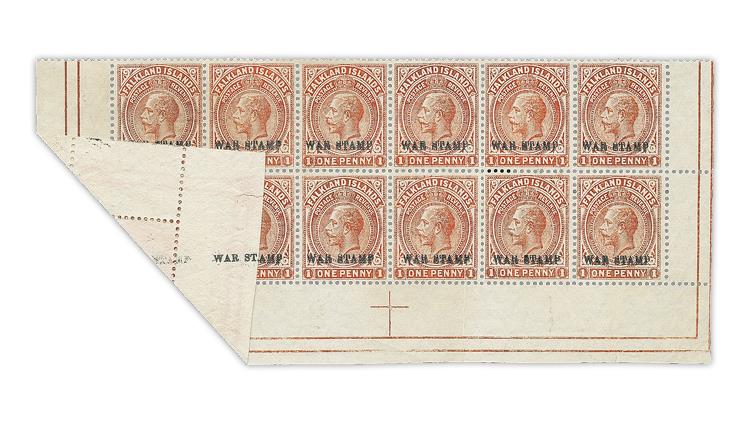 Among the choice offerings in Robert A. Siegel Auction Galleries’ Dec. 1-2 sale of worldwide stamps and postal history is the Carlos Garcia-Moral collection of Falkland Islands war tax stamps and covers. A highlight of the collection is this block of 12 o 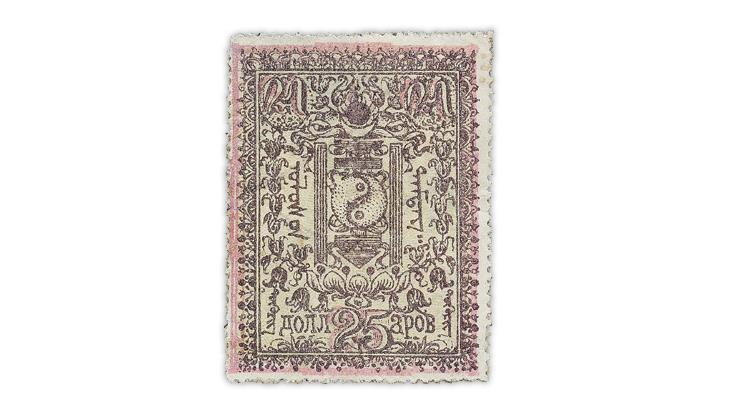 Also up for bids in the Dec. 1-2 Siegel auction is the collection of Mongolia stamps and covers formed by Richard Clever. A rarity from the collection is this Mongolia 1926 $25 gray and pink revenue stamp that was first reported in 1959. Of the 300 believ 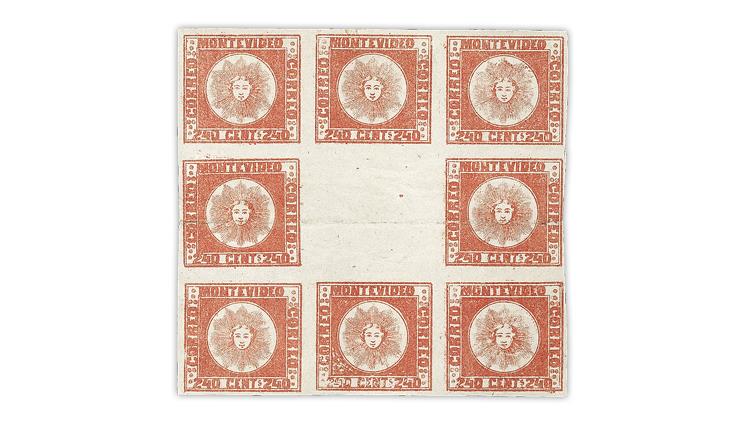 The reconstructed sheet of the Uruguay 1858 240-centesimo dull vermilion stamp from the Gordon N. John collection will cross the auction block during the Siegel sale. John carefully reassembled the sheet from 14 separate blocks over 20 years. One of the b
Previous
Next

The sale will be held in association with Charles F. Shreve, director of Siegel International.

In an overview of the auction, Siegel said British Commonwealth offerings will include “numerous elusive and seldom-seen stamps.”

Highlights include Falkland Islands war tax stamps and postal history from the Carlos Garcia-Moral collection and exceptional 1895-96 first issues and 1931 postage due stamps from Zanzibar.

Classic stamps and covers of Europe from the renowned collection of Arthur S. Przybyl will be up for bids.

Additional exceptional items to be sold are Mongolia stamps and covers from the gold-medal exhibit collection formed by Richard Clever and the reconstructed sheet of the Uruguay 1858 240-centesimo dull vermilion stamp from the Gordon N. John collection.

Uruguay specialists will be pleased to see 1864-66 Coat of Arms stamps, multiples and covers from a grand prix exhibit.

One of the signature multiples from the Garcia-Moral collection is an unused (no gum) block of 12 of the Falkland Islands 1919 1-penny orange vermilion war tax stamp with the doubled “War Stamp” overprint error (Scott MR2a) and a foldover “between overprints causing the second overprint to miss the bottom left stamp and only ‘AMP’ partial second overprint on position 56 (position eight in block),” according to Siegel.

Only a single sheet of 60 of the 1d war tax stamp was printed with the double overprint. Because of the foldover on the block of 12, only 58 examples exist that show complete doubling of the overprint.

During World War II, the block was secured in an underground safe deposit vault on London’s Chancery Lane. Water used to fight the fires following intense aerial bombing of the city seeped into the vault and removed the gum from the block, according to Siegel.

Siegel is offering this remarkable Falkland Islands war tax stamp error block with an estimate of $10,000 to $15,000.

Among the rarest of the stamps in the Clever collection of Mongolia is a 1926 $25 gray and pink revenue stamp that was first reported in 1959. Siegel describes the stamp as “an important rarity for the Mongolia specialist or worldwide revenue collector.”

“It is believed only 300 were produced and quickly withdrawn, possibly due to the horizontal displacement of the pink printing. Only a tiny fraction have survived,” Siegel said.

As shown on the stamp, the pink is shifted noticeably to the left. This is most easily seen in the left margin and the “25” inscription at bottom.

According to Siegel, the stamp has “shallow thin spots” and a “faint trace of a pen-stroke cancel.”

The crown jewel of the Uruguay offerings in the Siegel sale is the reconstructed sheet of the 1858 240c dull vermilion stamp (Scott 6) from the John collection.

Siegel states that the original complete sheet of 204 stamps was discovered prior to 1887. It was separated into 14 smaller blocks in 1912. Four defective stamps were subsequently removed, leaving 200 stamps.

“Since its discovery more than 134 years ago, the 240-centesimos sheet has been regarded as one of the most outstanding items in classic philately,” Siegel said.

“Without it, philatelists might never have deduced the configuration of the printing stone, the reason for the remarkable ‘blank space’ multiples, or the cause and sheet position of the 180-centesimos Vermilion color error.”

There are seven blank spaces in the reconstructed sheet, the result of an accidental transfer to the printing stone of the 180c design in error.

The block pictured here is from the reconstructed sheet and shows one of the seven blank spaces.

A single catalog has been prepared for the two-day worldwide stamps and postal history sale. Full details of the auction, including a downloadable version of the catalog and online bidding options, are available on the Siegel website.