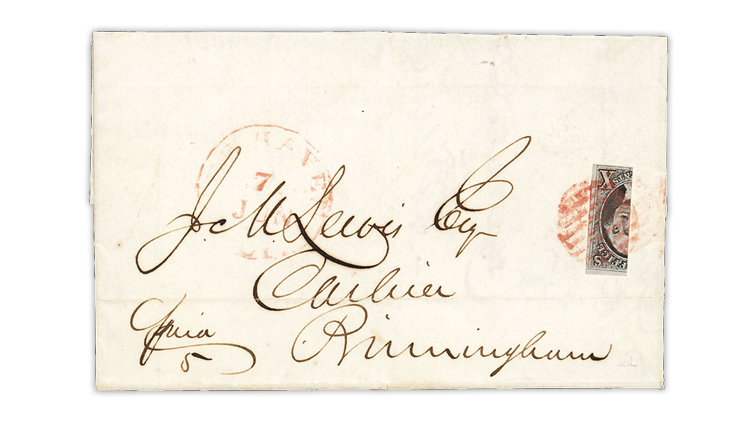 One of the three United States 1847 10¢ Washington bisect covers up for sale in the March 3-4 Cherrystone auction is franked with a vertical bisect of the 10¢ stamp, which paid the 5¢ rate for a half-ounce letter mailed a distance less than or equal to 300 miles. The cover was mailed June 7, 1851, from New Haven, Conn., to Birmingham, Conn. 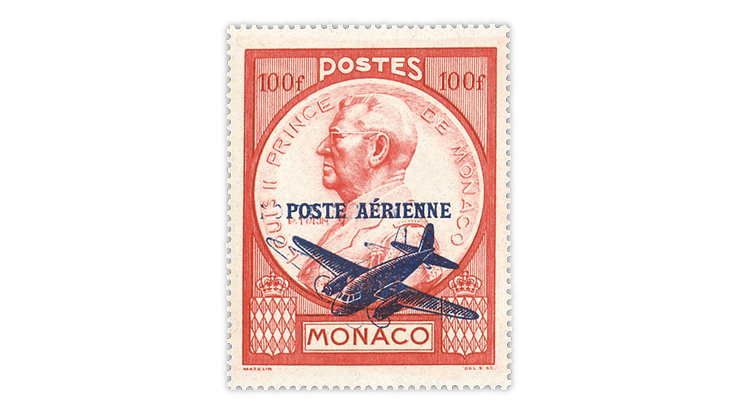 Cherrystone is offering a choice never-hinged example of Monaco’s 1946 100-franc Prince Louis II airmail stamp with a double overprint. According to Cherrystone, it is one of only 10 such errors recorded.
Previous
Next

Among the more than 1,600 lots up for bids during the two-day sale are the Fred Blau collection of Palestine aerophilately and military mail, and the Canal Zone and Panama collection of Ernesto Arosemena.

In its description of the sale, Cherrystone draws attention to “an exceptional collection” of World War II occupation proofs and essays from Poland.

In the philatelic lexicon, a bisect is a stamp cut or perforated into two parts, each half representing half the face value of the original stamp. Officially authorized bisects have often been used during temporary shortages of commonly used denominations.

Three attractive U.S. bisect covers, each franked with a bisect of the 1847 10¢ black George Washington stamp (Scott 2), are offered in the Cherrystone auction.

One of the three covers is franked with a right vertical bisect of the 10¢ Washington (Scott 2b), which paid the 5¢ rate for a half-ounce letter mailed a distance less than or equal to 300 miles.

Multiple strikes of a circular red grid cancel tie the bisect to the folded letter. Note that the bisect is upside-down on the cover.

Collectors familiar with early U.S. postal rates will recognize that this cover represents a very late use of the 1847 10¢ issue.

On July 1, 1851, the rate for a half-ounce domestic letter was reduced from 5¢ to 3¢. This new rate applied to letters mailed a distance less than or equal to 3,000 miles, a ten-fold increase over the old distance of 300 miles. Other postal rates also were introduced on the same day.

On May 20, 1946, Monaco issued a pair of overprinted 50-franc and 100fr airmail stamps (Scott C8-C9). The overprint was applied in blue and consists of two elements: the words “Poste Aerienne” (“airmail” in French) and an airplane. Inverted and double overprint errors are known on the 100fr airmail stamp.

Cherrystone is offering a choice never-hinged example of the 100fr airmail stamp with a double overprint (Scott C9b). In its description of the stamp, Cherrystone notes that it is one of only 10 such errors recorded.

Although faint, the errant second overprint is most visible to the left of and slightly below the plane’s right wing. The doubling of “Poste Aerienne” is more difficult to see.