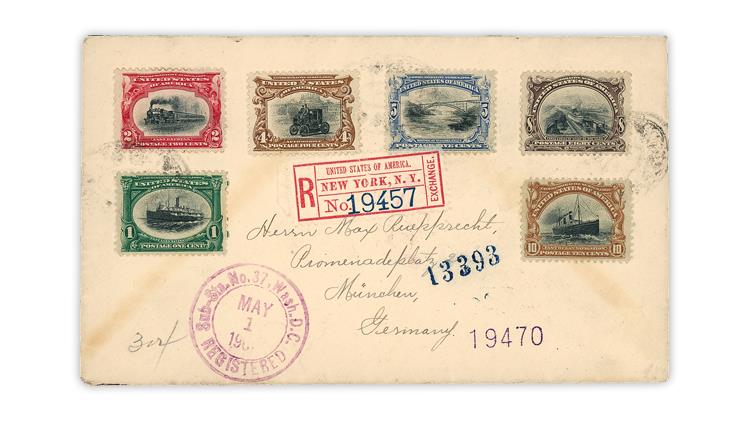 Schuyler Rumsey Philatelic Auctions’ April 21-24 Westpex sale will present an extensive array of United States and British Commonwealth stamps and postal history. One of the more eye-catching items up for bids is a first-day cover bearing a complete set of the six U.S. 1901 Pan-American Exposition stamps. 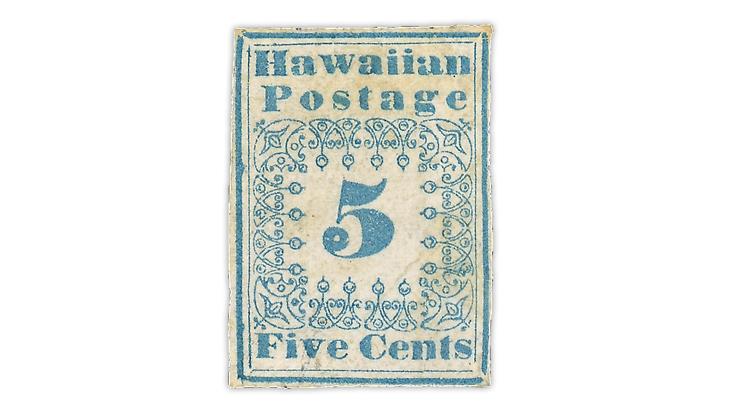 The impressive Gary Munson collection of Hawaii will cross the Rumsey auction block during the firm’s April 23 sale. The first item up for bids is an important rarity: an unused example of the 1851-52 5¢ blue Missionary stamp. Only 10 unused examples of this stamp are recorded in private hands.
Previous
Next

Schuyler Rumsey Philatelic Auctions will conduct its signature Westpex sale and a specialized Hawaii sale April 21-24 in conjunction with the Westpex stamp show.

Both auctions will be held in the hotel’s Bayside II ballroom. Note that the Westpex sale begins April 21, one day prior to the show.

The specialized sale will take place April 23 and showcases the Gary Munson collection of Hawaii.

Among the highlights of the British offerings is the Rutherford collection of the Queen Victoria Jubilee issue.

Specialized U.S. holdings that will be up for bids are the John Drew collection of Arizona postal history and the Manwood collection of express company labels.

The stamp is just one of 64 certified examples known, according to Rumsey, and is accompanied by a 2011 graded extra fine-90 certificate from the Philatelic Foundation.

Scott 198 in the grade of extra fine-90 is valued at $17,000 in the Scott Stamp Values U.S. Specialized by Grade, which gives extended values in eight different grades for selected U.S. stamps.

Rumsey lists this attractive special printing of the 12¢ Henry Clay at the Scott Specialized Catalogue of United States Stamps and Covers value of $9,500, the value for a very fine-80 example without faults.

The value is in italics to indicate an item that can be a challenge to value accurately because of limited market data.

One of the more eye-catching items to cross the Rumsey auction block during the Westpex sale is a lovely U.S. registered first-day cover franked with a complete set of the six stamps (Scott 294-299) issued May 1, 1901, in celebration of the Pan-American Exposition held May 1-Nov. 1, 1901, in Buffalo, N.Y.

The purple double-outline circular datestamp at lower left shows the registered FDC was mailed May 1, 1901, from substation No. 37 in Washington, D.C.

A registry exchange label on the front and a May 2 handstamp on the back (not pictured) show that the cover transited through New York City during its journey to Munich, Germany. A second backstamp confirms the cover arrived in Munich May 13.

Once part of the impressive Gibson collection, the cover is one of 16 recorded FDCs franked with a complete set of the 1901 Pan-American Exposition stamps.

In the April 23 sale catalog for the Munson collection of Hawaii, Rumsey provides a summary of the famous Missionary stamps of 1851-52:

“The Missionaries were issued on October 1, 1851 in three denominations that prepaid the Second Treaty Period rates within Hawaii and the United States: 2¢ for newspapers to the U.S., 5¢ for the Hawaiian postage, and 13¢ for the rate to the U.S. east coast (5¢ Hawaiian, 2¢ ship fee and 6¢ U.S. postage). The dual nature of the 13¢ stamps, comprising postage of two nations, is most remarkable.”

Rumsey’s auction of the 504-lot Munson collection opens with five Missionary stamps. First to hit the auction block is a marvelous unused (no gum) type I example of the 5¢ blue Missionary (Scott 2).

The stamp possesses four full to large margins, and Rumsey notes the presence of a sealed tear at lower right and a “couple other minor faults.”

A 1994 Philatelic Foundation certificate accompanies the stamp, which once resided in the Cole, Lilly, Golden and Hoge collections.

Rumsey describes the stamp as “one of the finest of only 10 recorded unused 5¢ Missionary stamps in private hands.”

Faults are the norm for the surviving Missionary stamps. An explanatory note preceding the Hawaii listings in the Scott U.S. Specialized catalog provides important context: “Values of Hawaii stamps vary considerably according to condition. For Nos. 1-4, values are for examples with minor damage that has been skillfully repaired.”

The two auction catalogs prepared for the Westpex and Munson Hawaii sales can be viewed online, or downloaded from the same site as PDF files. Online bidding is available through Stamp Auction Network.