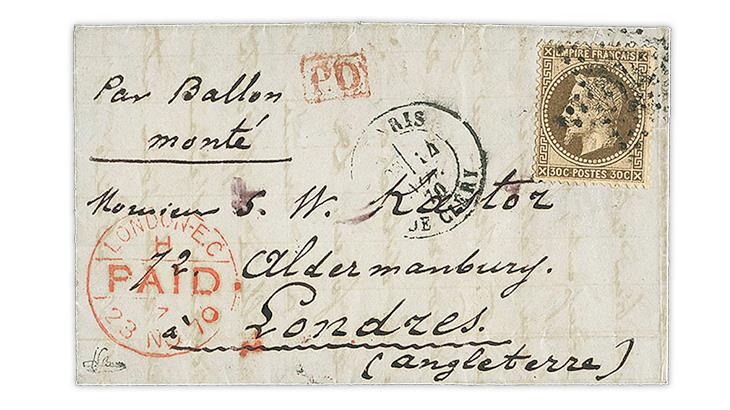 This 1870 ballon monte cover, an artifact of the Franco-Prussian War, will be available for bids in Schuyler Rumsey Philatelic Auctions’ Dec. 14-17 fall sale of United States and worldwide stamps and postal history. The cover was carried on the balloon Ge 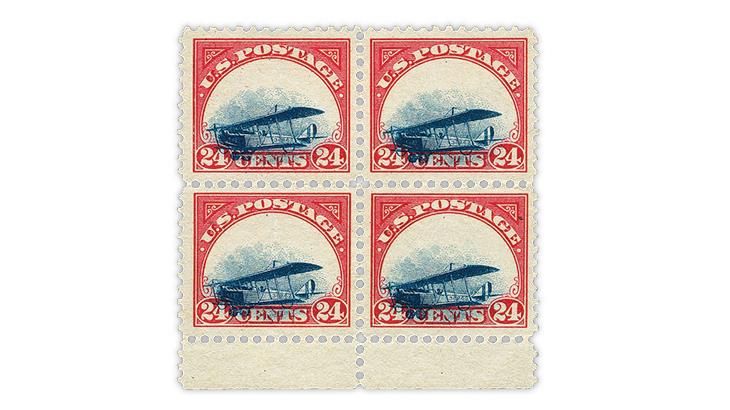 Rumsey’s Dec. 18 gems of philately sale features 365 lots, one of which is this spectacular bottom margin block of four of the so-called “grounded plane” variety of the U.S. 1918 24¢ carmine rose and blue Curtiss Jenny airmail stamp. 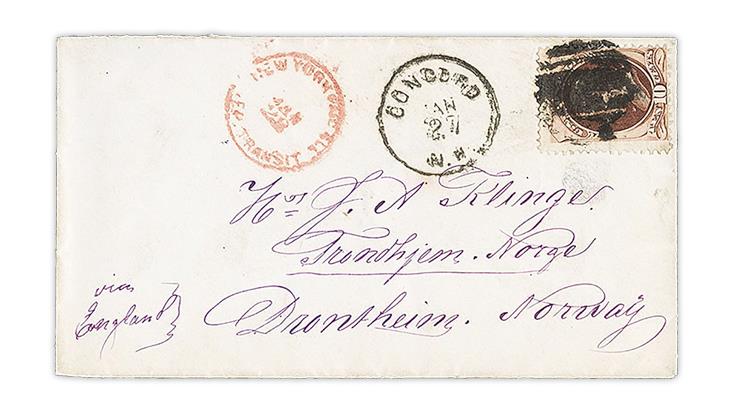 Among the highlights in the Dec. 18 Rumsey sale of the Robert S. Boyd collection of U.S.-German mails is this cover mailed Jan. 27, 1874, from Concord, N.H., to Trondheim, Norway, by North German Union closed mail via England. The 10¢ North German Union c
Previous
Next

Among the highlights of the general foreign offerings are four French ballon monte covers. The Scott Classic Specialized Catalogue of Stamps and Covers 1840-1940 lists these important artifacts of the Franco-Prussian War after the France airmail listings and provides a detailed note explaining their significance, part of which is given here:

One of the ballon monte covers in the Rumsey fall sale was flown aboard the balloon General Ulrich (Scott BM30) to Paris before being sent on to its destination in London. A French 1867 30-centime brown Emperor Napoleon III on yellowish paper stamp (34) paid the postage and is tied to the folded letter by a large dotted star handstamp.

A standout item in this sale is a never-hinged bottom margin block of four of the so-called “grounded plane” variety of the 1918 24¢ carmine rose and blue Curtiss Jenny airmail stamp (Scott C3).

All four stamps show a dramatic downward shift of the blue biplane vignette, such that the wheels of the aircraft extend well into the “CENTS” inscription at the bottom.

Rumsey notes that the grounded plane variety of Scott C3 “is believed to have come from portions of only three sheets” of 100 stamps and states that the block is “one of the finest known multiples” of this variety. Rumsey estimates this grounded plane block at $30,000 to $40,000.

Postal history of the North German Union is a key component of the Boyd collection.

One such cover was mailed Jan. 27, 1874, from Concord, N.H., to Trondheim, Norway, by North German Union closed mail via England. The term “closed” means the letter was carried in a sealed sack with other mail during transit.

In the case of this cover, the 10¢ North German Union closed-mail rate was paid with a single 1873 10¢ brown Thomas Jefferson stamp (Scott 161). This rate was effective July 1, 1873, per the convention between the United States and the Kingdom of Sweden and Norway, according to Rumsey.

The cover arrived in New York City Jan. 28, 1874, as shown by the red “New York Paid All Ger. [Germany] Transit” exchange office datestamp on the front. This New York exchange office marking was used on mail sent according to the 1873 convention.

Rumsey states the cover was carried on the Cunard Line’s Java from New York and arrived in Queenstown, Ireland, on Feb. 7. Rumsey is offering this cover from the Boyd collection with an estimate of $300 to $400.

The three auction catalogs prepared for the fall, gems of philately and Boyd collection sales can be viewed online, or downloaded from the website as PDF files. Online bidding is available through Stamp Auction Network.