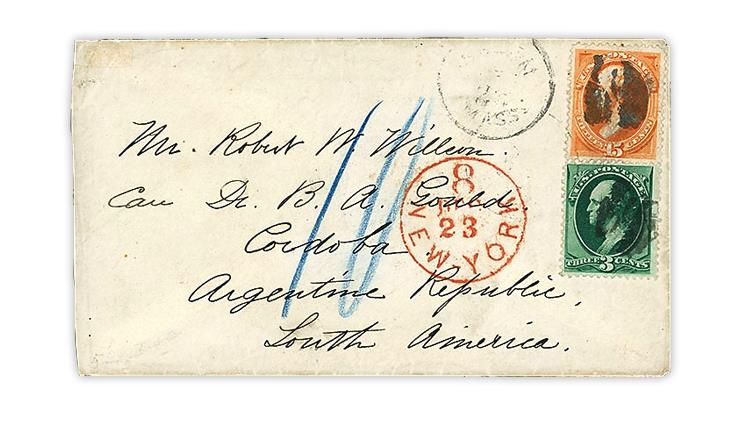 Schuyler Rumsey Philatelic Auctions will offer the United States inventory of dealer Stanley M. Piller (1942-2021) during a Dec. 6-7 sale in San Francisco. Up for bids will be this attractive 1874 cover from Salem, Mass., to Cordoba, Argentina. 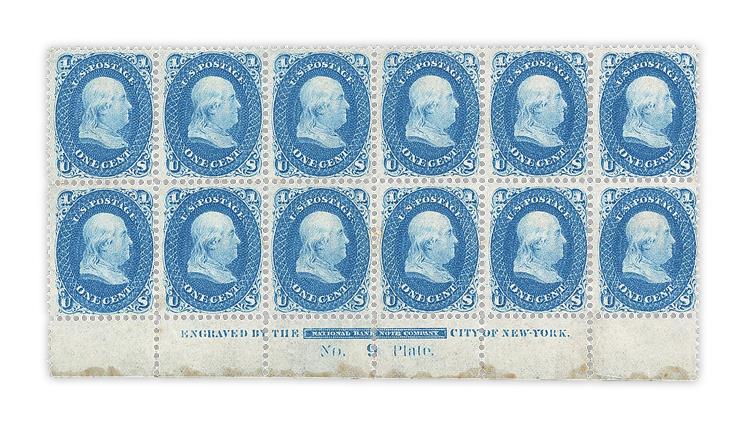 This mint plate block of 12 of the U.S. 1861 1¢ Benjamin Franklin stamp will cross the auction block during Rumsey’s Dec. 8 gems of philately sale. According to Rumsey, there are only two recorded plate blocks of 12 of this issue printed from plate 9.
Previous
Next

Leading off the three-day series is Rumsey’s Dec. 6-7 sale of United States stamps and postal history from the inventory of dealer Stanley M. Piller.

Piller, an esteemed dealer of classic U.S. and Confederate States stamps and postal history whose discerning eye helped form some of the most consequential collections of the past generation, died Nov. 23, 2021, at the age of 79.

The Piller sale features 340 lots of U.S. postal history from the 1847 issue through 20th-century issues, airmail, offices in China, Official issues, and carrier and local issues.

Also up for bids are 78 lots of proofs and essays.

The more than 560 lots of U.S. postage stamps reflect the breadth of Piller’s holdings, from postmasters’ provisionals to revenues.

The sale concludes with Civil War and U.S. possessions stamps and postal history.

Rumsey notes that docketing on the back of the cover shows it arrived in Argentina.

The large “10” in blue crayon on the front was applied in Argentina and indicates that inland postage to Cordoba of 10 reales was due from the recipient.

Rumsey describes the cover as being in very fine condition, “reduced slightly at left” and accompanied by a 2004 expertizing certificate from Professional Stamp Experts.

The 1873 15¢ Daniel Webster is valued on cover at $350 in the Scott Specialized Catalogue of United States Stamps and Covers.

Rumsey is offering this attractive 1874 letter from Massachusetts to Argentina with an estimate of $300 to $400.

One of the more eye-catching items from the offerings of the 1861-66 issue is a mint, never-hinged bottom margin plate number block of 12 of the 1861 1¢ blue Benjamin Franklin stamp (Scott 63).

Although not easy to see in the illustration of the block shown here, each stamp features the dot in “U” variety. This variety is identified by a small dot of blue ink on the left side of the “U” in the bottom left corner of the stamp.

A two-line imprint in the bottom selvage reads, “ENGRAVED BY THE NATIONAL BANK NOTE COMPANY CITY OF NEW YORK. No. 9 Plate.”

In its description of the block, Rumsey states: “This is likely the only 1¢ 1861 issue mint never-hinged full imprint and plate number multiple out of the 9 recorded.

“Don Evans in his book ‘The United States 1c Franklin, 1861-67’, records only eight full plate number and imprint multiples from Plates 9, 10 and 27. The Frelinghuysen sale had a block of 35 with full bottom imprint and plate no. 10 selvage not listed by Evans. For plate 9, there are only two recorded plate blocks of twelve, both are likely taken from one of the Chapin-listed larger multiples including the block offered here that comes from the ex-Lilly sheet of 98.”

An unused 1861 1¢ Franklin plate number block of eight with imprint is valued at $6,500 in the Scott U.S. Specialized catalog. The value is italicized to indicate an item that trades infrequently in the philatelic marketplace, which means the Scott editors had limited data available to establish a value.

Rumsey closes the gems of philately auction with six lots of Hawaii, including a used 1865 5¢ blue Numeral stamp on blue paper (Scott 22) that once resided in the David Golden collection of Hawaiian stamps and postal history.

The stamp, which has large margins all around, bears a clear strike of a square grid cancel and a partial San Francisco circular datestamp. Rumsey draws bidders’ attention to the stamp’s “rich color” and “beautifully blued paper.”

A 2021 certificate from the Philatelic Foundation accompanies the stamp, according to Rumsey.

Rumsey is offering this Hawaii 1865 5¢ blue Numeral stamp at the Scott U.S. Specialized catalog value of $900.

The two auction catalogs prepared for the Piller and gems of philately sales can be viewed on the Rumsey website, or downloaded from the same site as PDF files. Online bidding is available through Stamp Auction Network.