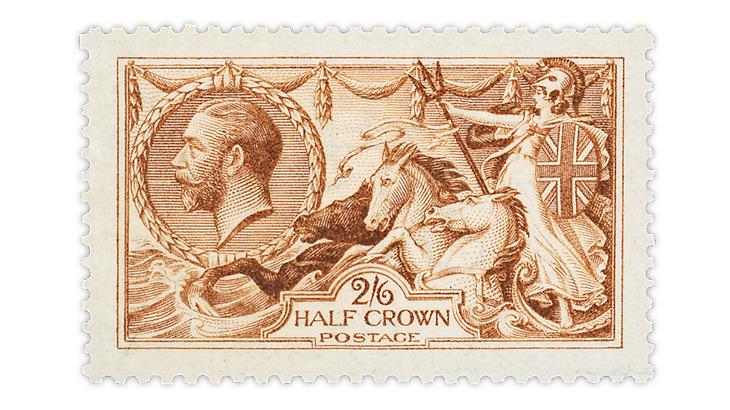 Schuyler Rumsey Philatelic Auctions’ July 29-Aug. 1 Westpex sale will offer the Steve Pacetti collection of Great Britain King George V Seahorse issues. One of the rarer stamps up for bids is a mint, never-hinged 2-shilling, 6-penny stamp printed in the i 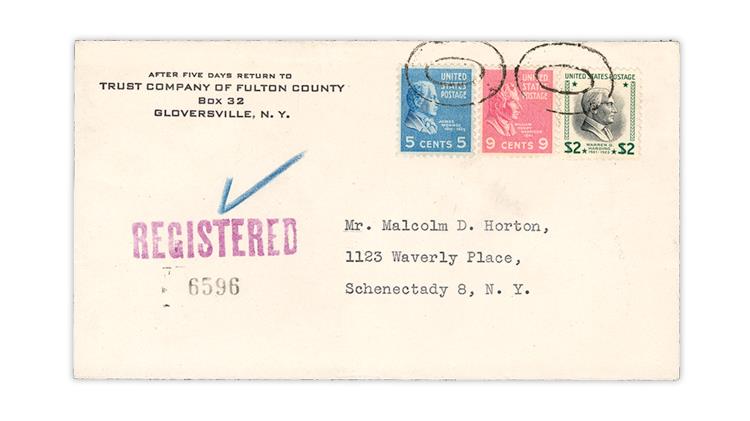 A handful of covers franked with stamps from the popular United States Presidential definitive (regular-issue) series will be available to tempt bidders in the Westpex auction. A $2 Prexie pays most of the postage on this 1952 registered letter sent from 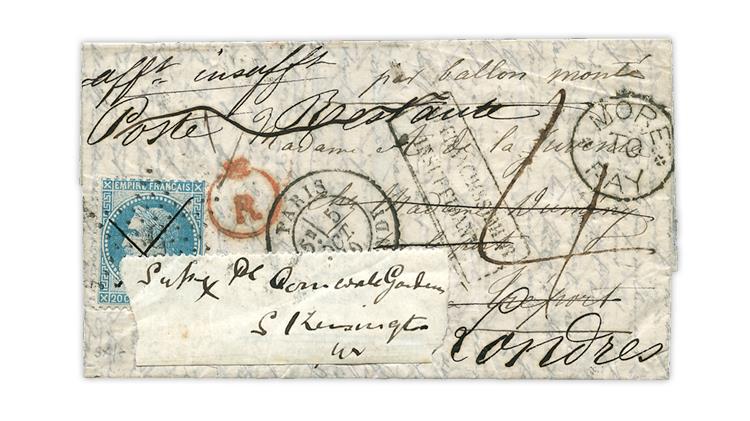 The impressive Bernhard D. Forster collection of ballon monte covers will cross the auction block during the Schuyler Rumsey’s July 31 Transportation sale. One of the scarcer covers is postmarked Oct. 5, 1870, in Paris and was carried aboard the balloon A 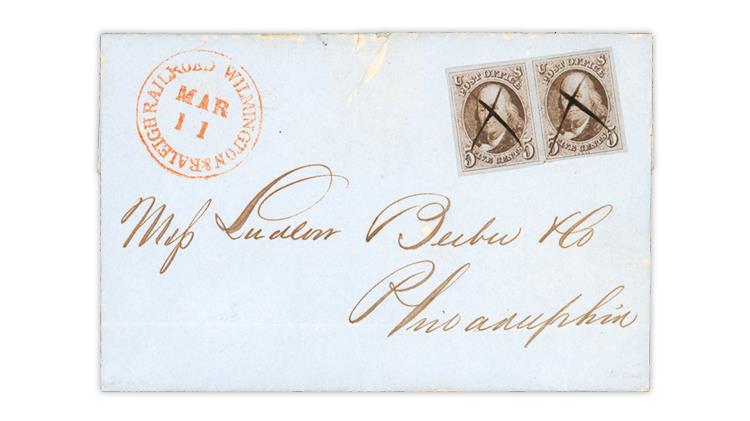 Both auctions will be held in the hotel’s Bayside II ballroom. Note that the Westpex sale begins July 29, one day prior to the show.

Among the highlights of the British offerings is the specialized collection of Great Britain King George V Seahorse issues formed by Steve Pacetti.

One of the scarcer Seahorse stamps up for bids is a mint, never-hinged 2-shilling, 6-penny stamp printed in the intense bright reddish cinnamon brown shade. This stamp is from the 1915 De La Rue printing and is a color variety of the 2sh6d yellow brown stamp (Scott 173d).

Rumsey describes the stamp as having choice centering and rich radiant color and notes that a 2019 Hendon certificate is included.

According to Rumsey, this stamp is believed to be one of three known examples of this notably rare color variety. The stamp is offered with an estimate of $2,000 to $3,000.

A handful of covers franked with stamps from the popular U.S. Presidential definitive (regular-issue) series will be available to tempt bidders. Collectors affectionately call these stamps the Prexies.

The Scott Classic Specialized Catalogue of Stamps and Covers 1840-1940 lists and values these important artifacts of the Franco-Prussian War after the France airmail listings and provides a detailed note explaining their significance, part of which is given here:

In the catalog introduction to the Forster ballon monte collection, Schuyler Rumsey, president of the Rumsey firm, observes that the collection “is one of the finest ever assembled and includes virtually every flight with many rare uses and destinations. The collection was last exhibited by Mr. Forster in the 1956 FIPEX International Exhibition in New York, where it was awarded a gold medal.”

One of the scarcer ballon monte covers is postmarked Oct. 5, 1870, in Paris and was carried aboard the balloon Armand-Barbes. The cover is franked with a single 20-centime blue Napoleon III (Scott 33).

In its description of this cover, Rumsey states it was “forwarded to London and then onward to Cornwall Gardens with postage stamp sheet margin used for forwarding address.”

Numerous markings on the front of the cover include a boxed “Affranchissement Insuffisant” (French for insufficient postage), a British “More To Pay” postage due handstamp and a small crowned R in red to indicate forwarding to Cornwall Gardens.

Rumsey describes this cover as “a lovely and interesting usage” and lists it with an estimate of $750 to $1,000.

According to Rumsey, Feldman’s railroad collection includes a plethora of rare and unique markings, including the 1838 “Baltimore R.R,” which is the earliest dated U.S. railroad handstamp. In addition there are Civil War patriotic covers, Confederate States postal history, illustrated advertising covers and much more.

A cover franked with a horizontal pair of the 1847 5¢ Franklin (Scott 1) bears a superb strike of the “Wilmington & Raleigh Railroad” red route agent circular datestamp at top left. The cover is addressed to the Ludlow Beebee firm in Philadelphia, Pa.

Rumsey notes that the cover probably originated from Charleston, S.C., sometime in 1848. It was placed on railroad route 2817 and then transported by steamboat and railroad to Weldon, N.C., where it was transferred via Richmond, Va., and Washington, D.C., to Philadelphia.

This railroad cover, which once resided in the William H. Gross collection, carries an estimate of $1,500 to $2,000.

The two auction catalogs prepared for the Westpex and Transportation sales can be viewed online at www.rumseyauctions.com, or downloaded from the same site as PDF files. Online bidding is available through Stamp Auction Network.