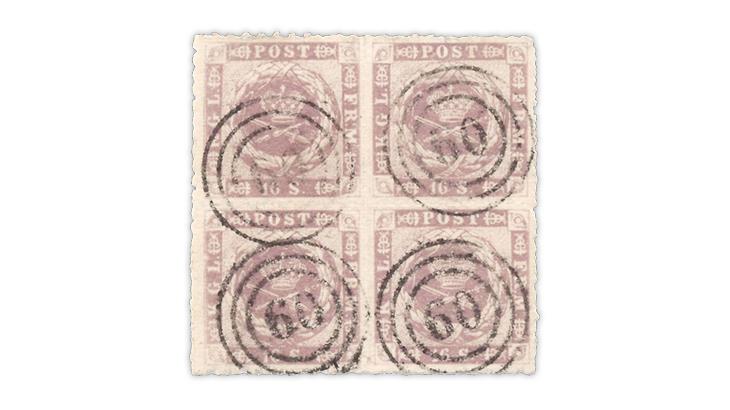 The largest known used multiple of Denmark’s 1863 16-skilling violet stamp with roulette separations will be offered during the March 25-27 international stamp auction by Postiljonen in Malmo, Sweden. 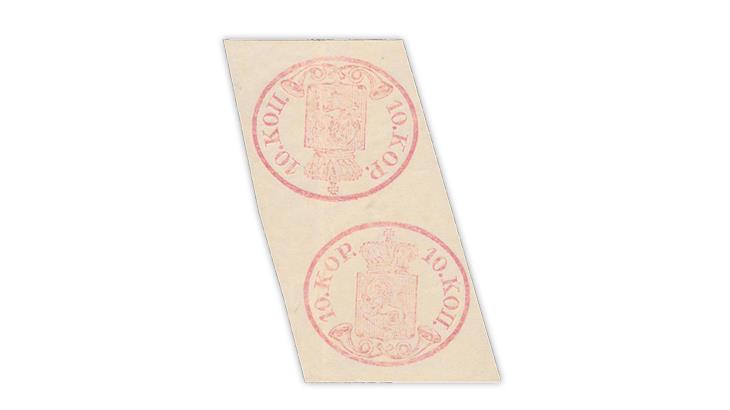 This tete-beche pair of Finland’s 1856 10-kopeck rose stamp with original gum was once part of a well-documented block of six. It is offered in the upcoming Postiljonen auction.
Previous
Next

The March 25-27 Postiljonen auction in Malmo, Sweden, features a selection of mostly Scandinavian stamps, covers, large lots and collections, but the sale opens with more than 300 lots of material from non-Scandinavian countries.

The three-day sale also includes the second round of the Around the World in 80 Collections offering, plus part 2 of the Norsemen collection of Greenland’s Pakke-Porto issues, and material from the Mats Gustafsson gold collection of large Official stamps.

The worldwide items that open the auction include material from the various Italian states, Great Britain and the British Commonwealth, Germany and area, and much more.

The extensive Scandinavian offerings open with early Danish postal history and classic Danish stamps, with more than 35 lots focused on the varieties of Denmark’s first two issues from 1851, the 2-skilling blue (Scott 1) and the 4sk brown (2).

The rouletted 1863 16sk violet stamp with a Royal Emblems design similar to the earlier imperforate 4sk issue is offered in a used block of four.

Postiljonen describes this as the largest used multiple of the issue and the only block of four recorded for the 16sk roulette stamp.

The block also includes the position 31 stamp with the cliche flaw of a dent in left frameline.

“Extremely beautiful with four well placed postmarks ‘60’ RØDBY, a slight corner flaw of no importance. This was the favourite item of Christian Andersen, who owned many other spectacular rarities and it is the absolutely greatest item of this issue,” according to Postiljonen.

The stamps also once belonged to Peer Lorentzen, who won the international grand prix at Madrid in 2000 with this block in his collection. It is accompanied by certification from Gronlund, Debo and Lasse Nielsen, and is listed with a minimum bid of €50,000 (approximately $60,000 in early March).

Postiljonen describes the prices listed in its auction catalog as “starting prices and not minimum prices.” Full details are found in the auction’s terms and conditions.

In a separate auction catalog, Postiljonen offers stamps, covers and remainder lots from the Osterman collection of Finland.

The focus with this group is entirely on 19th-century classics, primarily from the 1856 first issues (Coat of Arms within oval) through the 1885 Coat of Arms 10-markka stamp (Scott 37).

A spectacular rarity from this group of significant classics is the tete-beche pair of the imperforate 1856 10-kopeck rose stamp (Scott 2a).

The stamp shows the crowned coat of arms of Finland, then a grand duchy of the Russian Empire, with two post horns below, all within a horizontal oval.

With each stamp upside-down in relation to the other, the pair is an unusual configuration and in this instance cherished for its rarity.

Postiljonen describes it as extremely fresh with original gum and a vertical fold.

“This pair was originally part of a famous block of six, which was bought by Agathon Faberge in 1907 from Robert Mertens,” Postiljonen said, “later it was in the collections of Alfred Liechtenstein and Per-Johan Hannelius. This pair was split from the block and offered as such for the first time in 1969 by H.C. Schwenn.”

The pair is authenticated with certificates from Andre Nussbaum-Bisser (1970) and Herbert Oesch (1999).

The individual lots from the March 25-27 Postiljonen auction can be viewed online, with online bidding options available.

The auction will take place at the firm’s offices in the Oresundshuset at Hans Michelsensgatan 9 in Malmo.