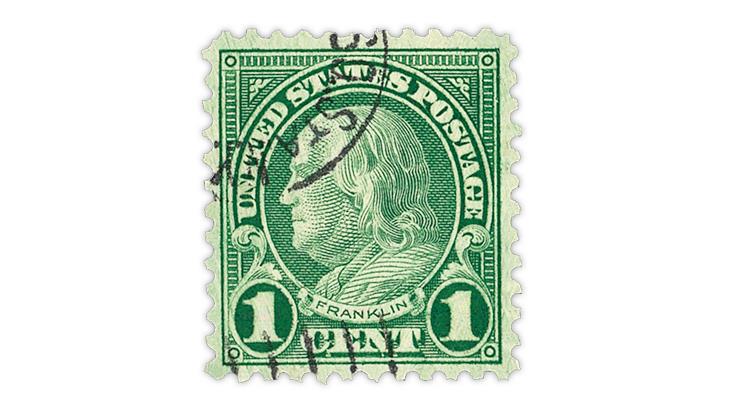 This scarce United States 1923 1¢ Benjamin Franklin coil waste stamp with exceptional centering and a light cancellation will be up for bids during Daniel F. Kelleher’s March 2-4 Flagship sale. The stamp comes with a 2020 graded extra fine 90 certificate 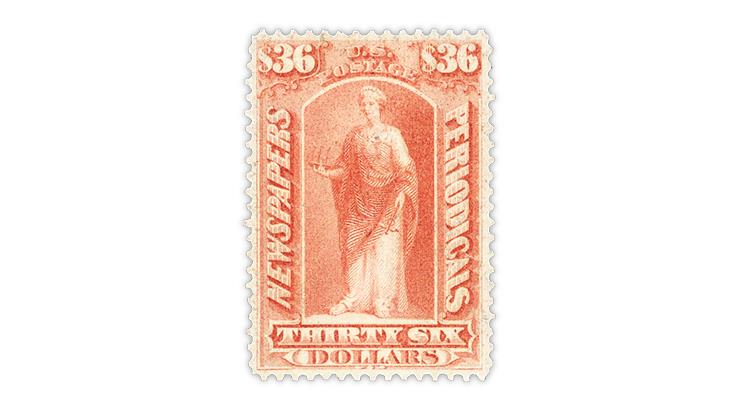 The Kelleher auction will give collectors the opportunity to bid on a mint, never-hinged example of the U.S. 1875 $36 brown rose newspaper stamp featuring an allegorical image of Commerce.
Previous
Next

A United States 1923 1¢ Benjamin Franklin coil waste sheet stamp in choice condition will be among the highlights in Daniel F. Kelleher Auctions’ March 2-4 Flagship sale of U.S. and possessions stamps and postal history.

All three sessions will begin at 10 a.m. Eastern Time at Kelleher’s gallery in Danbury, Conn.

No formal announcement from the U.S. Post Office Department accompanied the production of the 1¢ Franklin coil waste stamp, which first appeared in the fall of 1923. As a result, collectors did not learn of its existence until April 1925.

According to a census kept by Robert A. Siegel Auction Galleries, just 122 examples of this coil waste stamp have been recorded.

Kelleher describes the used 1¢ Franklin coil waste stamp in its sale as “a spectacular example of this great rarity, as perfectly centered as they can come, fresh with nice wavy-line c.d.s. [circular datestamp] cancel.”

In 2020 the Philatelic Foundation expertized this stamp and assigned it a grade of extra fine 90. The foundation’s certificate accompanies the stamp.

A used example of Scott 594 is valued at $10,500 in the 2021 Scott Specialized Catalogue of United States Stamps and Covers.

The value is italicized to indicate an item that can be difficult to value accurately because it appears infrequently in the philatelic marketplace. Furthermore, as explained in a footnote in the catalog, the value is for a stamp “with perforations just touching frameline on one side.”

Kelleher lists this used stamp with an estimate of $75,000 to $100,000, saying that it is “the finest centered example we have had the pleasure to offer.”

Up for bids during the March 2 session is an 1875 3¢ blue green George Washington special printing stamp (Scott 169). The stamp is without gum as issued, is “fresh with clean color and sharp impression” and comes with 1993 and 2008 certificates from Professional Stamp Experts, according to Kelleher.

The stamp has perforations that were cut by scissors, which is typical for stamps of the 1875 special printing of the 1873 stamps printed by the Continental Bank Note Co.

The 1875 special printing stamps were valid for postage, but “actual use was almost non-existent,” according to the Scott U.S. Specialized catalog.

The 3¢ blue green Washington is the only 1875 special printing documented on cover. The cover, which is unique, is postmarked March 5, 1876.

One of the more impressive back-of-the-book items to be offered during the March 4 session is a mint, never-hinged example of the 1875 $36 brown rose newspaper stamp (Scott PR30) featuring an allegorical image of Commerce.

Kelleher describes it as “a simply outstanding stamp, with soft color and sinuous lines, paper fresh with margins clear all around.”

Scott PR30 in unused (previously hinged) condition is valued at $5,000 in the Scott U.S. Specialized catalog. The mint, never-hinged example in the Kelleher auction, which comes with a 2018 graded very fine 80 certificate from the Philatelic Foundation, is offered with an estimate of $20,000 to $30,000.

There are also many less expensive stamps among the more than 1,100 lots that will be up for bids during the auction.

One such stamp is a mint, never-hinged U.S. 1956 $5 Alexander Hamilton (Scott 1053) with a 2005 graded gem 100 certificate from Professional Stamp Experts. The $5 Hamilton is the top denomination in the popular 1954-73 Liberty definitive series.

In its description. Kelleher states that the stamp is “an absolute monster in every respect.” It is being offered in the auction with an estimate of $350 to $500. Scott values a mint, never-hinged $5 Hamilton in gem 100 condition at $500.

Kelleher has prepared a single catalog for the three-day Flagship sale that is available for viewing and download on the firm’s website, with online bidding options available.