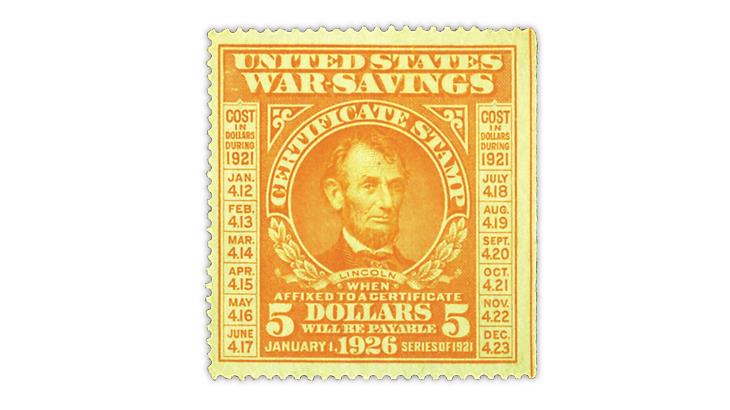 This United States 1920 $5 orange Abraham Lincoln war savings stamp on green paper will be up for bids during Cherrystone Philatelic Auctioneers’ Nov. 15-16 sale of rare stamps and covers of the world. The stamp has a natural straight edge at right. 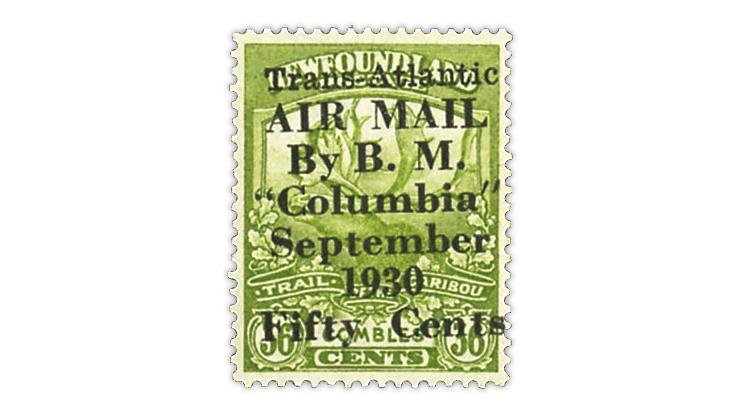 A highlight of the Newfoundland offerings in the Cherrystone auction is a well-centered mint, never-hinged 1930 50¢-on-36¢ olive green airmail stamp (Scott C5) commemorating the Oct. 10-11, 1930, trans-Atlantic airmail flight of the Miss Columbia.
Previous
Next

Cherrystone Philatelic Auctioneers will offer 1,450 lots of United States stamps and choice stamps and postal history from around the world in a sale to be held Nov. 15-16 at its gallery in Teaneck, N.J.

The two-day auction will take place over four sessions, with sessions each day at 10 a.m. and 1 p.m. Eastern Time.

Two of the many scarce stamps to tempt bidders are a United States 1920 war savings stamp and an overprinted and surcharged Newfoundland 1930 airmail stamp.

The auction begins with a broad selection of U.S. and possessions issues. Highlights include rare 19th- and 20th-century stamps, graded stamps, plate blocks, proofs and essays, and modern errors.

“In the Worldwide section we are pleased to offer a solid collection of postal history of Allied Intervention in Russia,” Cherrystone said.

According to Cherrystone, there are attractive offerings from Austria, China, Egypt, France and colonies, and Germany.

The first item to cross the auction block on Nov. 15 is a folded letter franked with an 1845 5¢ black Baltimore, Md., postmaster’s provisional stamp on bluish paper (Scott 3X3). The cover was mailed in 1846 to Northampton, N.Y., and bears light strikes of a red Baltimore circular datestamp and a red “PAID” handstamp.

The cover is also docketed “Due 5,” meaning that an additional 5¢ postage was due from the recipient.

Cherrystone notes the stamp is from position 10 in the original sheet of 12 and shows the thin frameline on three sides. The stamp is inscribed “5 Cents” and bears the signature of Baltimore postmaster James M. Buchanan.

A 1998 Philatelic Foundation certificate states that the cover is a “genuine usage.”

The 5¢ black Baltimore postmaster’s provisional stamp on bluish paper is valued on cover at $12,500 in the Scott Specialized Catalogue of United States Stamps and Covers.

Cherrystone lists this 1846 Baltimore, Md., postmaster’s provisional cover with an opening bid of $9,000.

Among the scarcer U.S. back-of-the-book items up for bids is a mint, never-hinged 1920 $5 orange Abraham Lincoln war savings stamp on green paper (Scott WS6) with a natural straight edge at right.

Cherrystone describes the stamp as having a “natural diagonal crease” and states that it is one of only two recorded mint, never-hinged examples of this issue.

“The stamp offered here was the final series of World War I, and matured on January 1, 1926.”

The maturity date is printed on the stamp, just below Lincoln’s portrait. It reads, “When Affixed To A Certificate 5 Dollars Will Be Payable January 1, 1926.”

A cautionary note preceding the savings stamps listings in the Scott U.S. Specialized catalog warns collectors to “beware of stamps without gum that have been regummed to appear unused with gum.”

In mint, never-hinged condition, Scott WS6 is valued at $12,000 in the Scott U.S. Specialized catalog. The value is in italics to indicate that limited market data was available to the Scott editors.

Cherrystone is offering this 1920 $5 orange Abraham Lincoln war savings stamp on green paper with a starting bid of $2,300.

Included in the offerings for the Canadian province of Newfoundland is a mint, never-hinged example of the overprinted and surcharged 1930 50¢-on-36¢ olive green airmail stamp (Scott C5) commemorating the Oct. 10-11, 1930, trans-Atlantic airmail flight of the Miss Columbia, a Bellanca monoplane.

Cherrystone describes the stamp as being “perfectly centered with wide even margins all around, post office fresh, certainly one of the finest known of this difficult stamp.”

The overprint above the “Fifty Cents” surcharge reads, “Trans-Atlantic AIR MAIL By B. M. ‘Columbia’ September 1930.” The underlying stamp is the 36¢ high denomination (Scott 126) of the 1919 Trail of the Caribou issue.

Additional information about the flight is given in a footnote to the Scott C5 listing in the Scott Classic Specialized Catalogue of Stamps and Covers 1840-1940, “Capt. J. Erroll Boyd and Lt. Harry Connor crossed the Atlantic to Croydon Airport (London), arriving Oct. 11, having been delayed in the Scilly Islands due to a shortage of fuel.”

Just 300 stamps were surcharged, and fewer than half of them were used on flight covers. Covers carried on the flight bear an Oct. 13, 1930, backstamp.

Against a Scott Classic Specialized catalog value of $13,000, Cherrystone lists this attractive overprinted and surcharged airmail stamp with an opening bid of $4,500.

The catalog for the Nov. 15-16 worldwide stamps and postal history sale can be viewed and is available for download on the Cherrystone website, with online bidding options available.