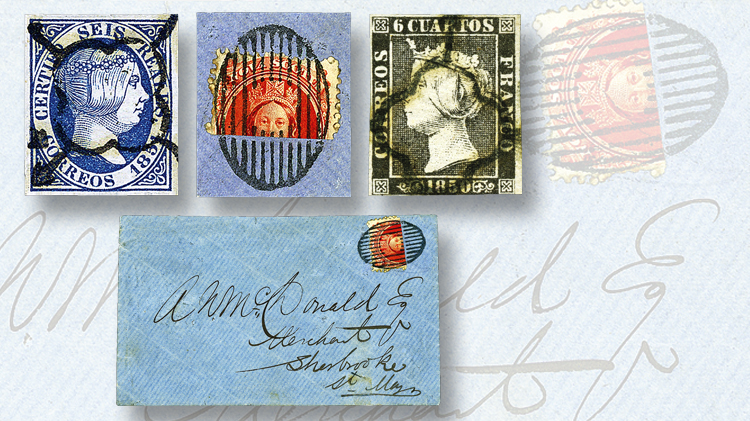 In the early days of postage stamps, some post offices concocted cancels that would avoid marring the face or symbol of the monarch, such as the so-called spider cancels of Spain on stamps depicting Queen Isabella II (left and right), and a Nova Scotia ca 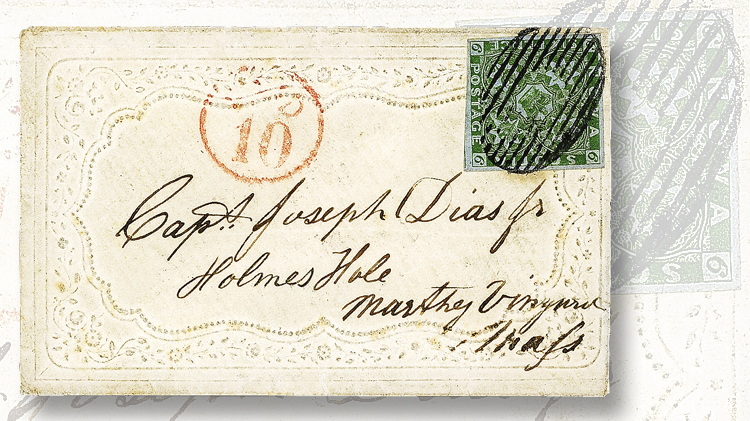 The same oval cancel with 11 parallel lines frames the crown at the center of Nova Scotia’s 6-penny yellow-green stamp (Scott 4) on this 1858 ladies envelope mailed to a whaling captain in Massachusetts. 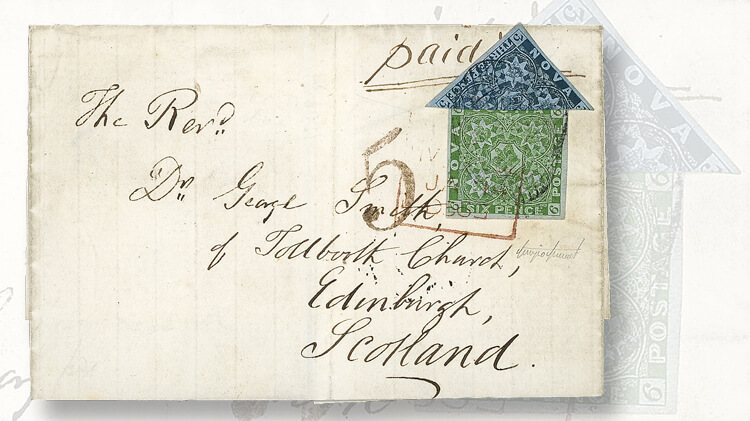 One of two known “house covers,” this cover sold for $6,325 in the Schuyler Rumsey auction of the Skywalk collection. A diagonal bisect of the 3-penny dark blue (Scott 3a) forms a “roof” above a 6d yellow-green (4). Together the two paid the 7½d rate from 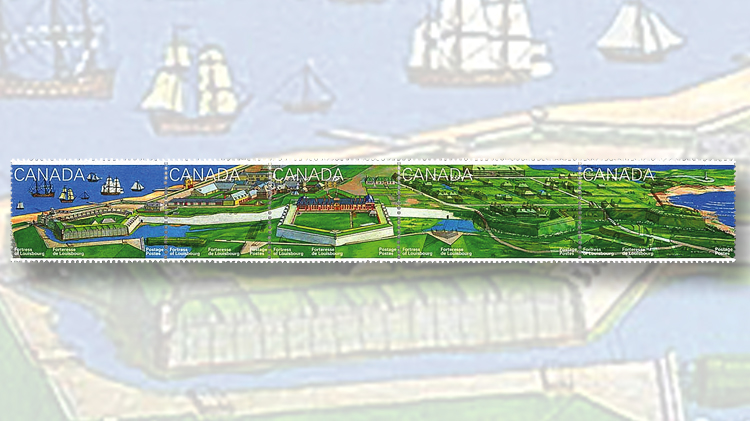 Issued by Canada in 1995, this nondenominated (43¢) booklet strip of five se-tenant stamps (Scott 1551a) depicts the massive fortress at Louisbourg, one of the most expensive and least successful fortifications in the history of the Americas. 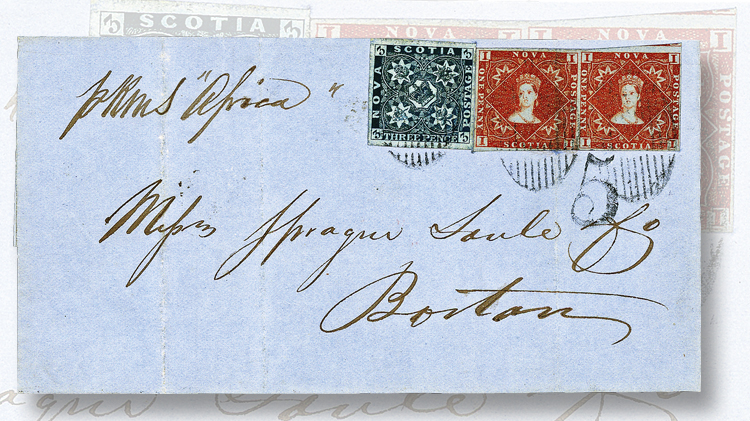 Partially inked cancels often were applied to the margin of stamps only, canceling them but leaving the face free of inking, as on this 1855 folded letter sent on the Cunard Line’s RMS Africa from Halifax, Nova Scotia, to Boston, Mass., with a 3-penny and 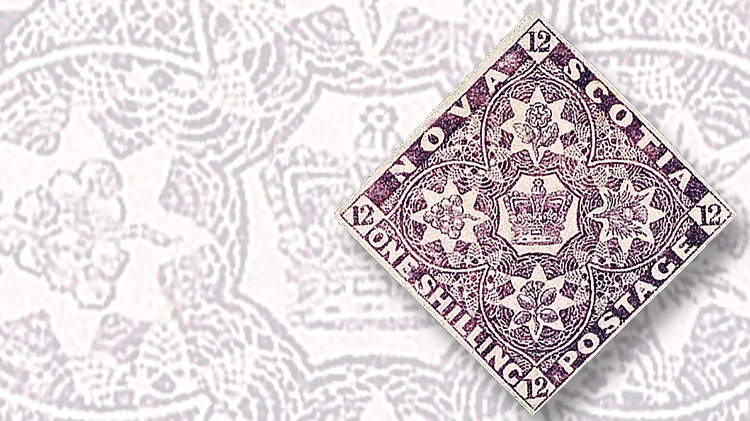 The author has long been fascinated by the diamond-shaped 1851-57 Pence issues of New Brunswick, Newfoundland and Nova Scotia picturing the heraldic flowers of Great Britain. This example of Nova Scotia’s elusive 1-shilling reddish purple (Scott 6), one o 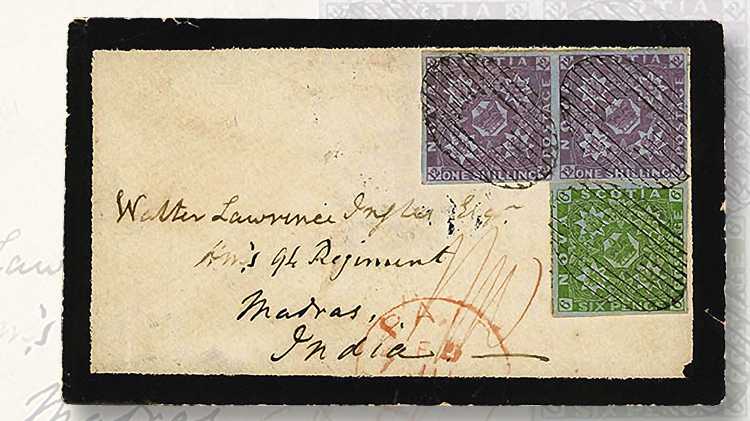 The most impressive use of these postmarks was on this remarkable 1853 mourning cover from Cape Breton Island to Madras, India, franked with a 6-penny yellow-green (Scott 4) and a horizontal pair of the 1-shilling dull violet (7), each canceled leaving th 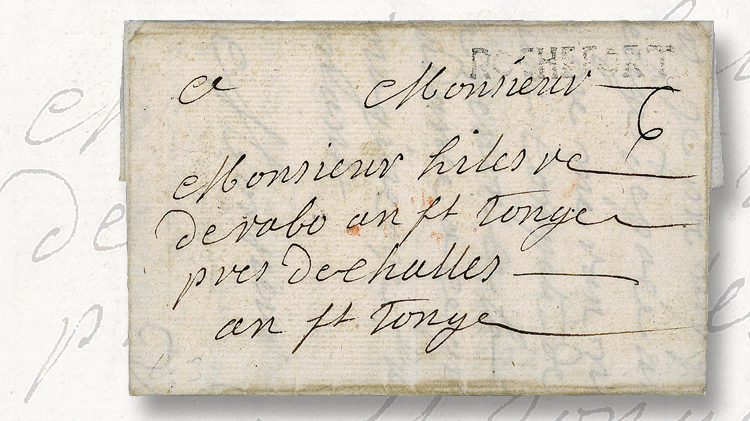 This 1735 folded letter from Louisbourg on Cape Breton Island was sent to France while the ill-fated fortress there was under construction. The earliest recorded letter from French Nova Scotia, it fetched $34,500 including the 15 percent buyer’s commissio
Previous
Next

Although the British North America Act of 1867 is credited with creating Canada, it actually united only three colonies.

The first was Canada itself, then consisting of the southerly and most populous parts of what would become the provinces of Ontario (called Upper Canada because of its position on the St. Lawrence River) and Quebec (Lower Canada).

The other two were the relatively small Atlantic colonies of New Brunswick and Nova Scotia.

It’s challenging to write about the philately of these colonies, a subject that’s likely to come up next year as Canada marks its 150th anniversary.

Every so often, however, at intervals that might be a generation or more apart, one of the few genuinely first-rate collections of these pre-provincial stamp-issuing entities will be offered at a public auction.

You and I may lack the wherewithal to acquire the gems, but a close reading of the catalog can teach even beginning collectors a great deal about the stamps and postal history.

The Skywalk sale conducted by Schuyler J. Rumsey Philatelic Auctions Sept. 23 at the Sescal stamp show in Los Angeles featured 427 lots of Nova Scotia, a showing not likely to be matched in either completeness or quality again in our lifetimes.

I thank Schuyler Rumsey for generously supplying images of every lot I asked for and permission to use them in this column.

You can download a PDF copy of the catalog here.

Linn’s New York correspondent and Auction Roundup columnist Matthew Healey previewed the sale in the Sept. 19 Linn’s and reported several top results in the Nov. 21 issue, including four lots that sold for a total of $204,125, which includes the 15 percent buyer’s premium, as do all other results listed here.

In July, the British North America Philatelic Society also published the entire collection as History and Postal History of Nova Scotia by Martin Eichele, a 276-page, full-color book presenting his collection organized to tell the story of the colony and its stamps and covers. It’s a tale well told, indeed.

The sale offered many historical documents, beginning with the first lot, a cover that predates the world’s first postage stamp by more than a century.

In addition to its historic importance, this stampless cover is a souvenir of quite possibly the worst boondoggle ever built in this hemisphere — and I know that’s quite a claim.

The fortress as originally conceived and built is pictured on a horizontal booklet strip of five nondenominated (43¢) stamps issued by Canada in 1995 (Scott 1551a).

Envisioned as an impregnable bastion on Cape Breton Island (then dubbed Ile-Royale, the most easterly extremity of New France), Louisbourg was named for French “Sun King” King Louis XIV.

Built over 28 years, with bricks, artisans and laborers shipped in from France, it exceeded its massive budget by an astounding 825 percent, causing the king to bitterly mutter that he expected to see its parapets coming up over the horizon one day.

The final bloated bill for Louisbourg came to 30 million livres, today equivalent to more than $7 billion, but the worst was yet to come.

When the British Navy and New Englanders laid siege to the fortress in 1745, it capitulated in 48 days.

Returned to the French under treaty in 1748, Great Britain besieged it again in 1758 during the French and Indian War.

This time, the badly outnumbered and disheartened defenders lasted 49 days.

The surrender of Louisbourg made possible the defeat of French forces near Quebec City the following year, which sealed the fate of New France forever.

Each of them pictures the heraldic flowers of Great Britain, as displayed nearby on Nova Scotia’s 1-shilling reddish purple (Scott 6). One of only six unused examples, two of which were offered in the sale, this one (lot 59) fetched $20,700.

In the early years of the postage stamp, many depicted monarchs or their symbols. Some of them were not amused to have postal clerks smacking their symbolic faces with black ink every day, and thus postmarks were designed to avoid defacing the royal visage.

Among these are the so-called spider postmarks often seen on Spanish stamps depicting Queen Isabella II, and cancelers in the form of elaborate frames used on Bomba Head stamps depicting King Ferdinand II from the Italian state of Two Sicilies.

Nova Scotia apparently tried a similar approach with its stamps, though one that put the emphasis squarely on canceling postage to protect postal revenue.

Nova Scotia’s canceler was an oval with 11 closely spaced parallel lines running across it. A square break at the center of the five lines across the middle of the postmark allowed a youthful Victoria or her crown to be seen.

Shown here are two canceled Queen Isabella II stamps flanking a cropped image of a later Nova Scotia stamp for which the postmark was never intended but works perfectly: a horizontally bisected 10¢ vermilion Victoria (Scott 12b) used to pay the 5¢ rate to Sherbrooke, Quebec. The cover (lot 103) sold for $805.

The best use of the cancel on a single Heraldic Flowers Pence issue in the sale is on the 6d yellow-green stamp (Scott 4) that franks a delicate embossed ladies envelope mailed in 1858 from Windsor, Nova Scotia, via Halifax and St. John’s, New Brunswick, to “Capt. Joseph Diaz Jr., Holmes Hole, Marthey Vinyard (sic), Mass.”

Although the cover is without contents, it isn’t hard to imagine why a woman in Nova Scotia might take an admiring interest in an American captain she had perhaps read about, but never met.

The 1997 book In Pursuit of Leviathan: Technology, Institutions, Productivity, and Profits in American Whaling, 1816-1906 includes the following:

“A Joseph Diaz Jr., then twenty-eight years old, was captain of the whaler Pocahontas of Holmes Hole in 1850, when the vessel was rammed and seriously damaged by a sperm whale in the South Atlantic. Diaz managed to get his vessel to Rio de Janiero — where it was repaired — but only after a hair-raising, two-week voyage. He also made a New Bedford voyage as captain of the St. George from 1853 to 1857.”

The most impressive use of these postmarks was seen on what turned out to be the most impressive performer in the sale. Lot 375 was a remarkable 1853 mourning cover from Sydney, on Cape Breton Island, to Madras, India, on the other side of the planet.

The cover is franked with Nova Scotia’s 6d yellow-green (Scott 4) and a horizontal pair of the 1sh dull violet (7), all tied by precisely struck postmarks that leave the crowns at the center of each stamp unmarred.

Rather than rely on the clever oval cancel to avoid sullying her majesty’s face or crown, many postal clerks seem to have applied partially inked cancels to the margin of the stamp only, effectively marking the stamp but leaving the face free.

An example is this 1855 folded letter sent on the Cunard Line’s RMS Africa from Halifax to Boston, with a 3d and a pair of 1d stamps paying the 5d rate.

A final noteworthy Nova Scotia Pence issue item is one of two known “house covers” with a diagonal bisect of the 3d dark blue (Scott 3a) used to form a triangular “roof” above a 6d yellow-green stamp (4).

Together the two stamps paid the 7½d rate from Pictou, Nova Scotia, to Edinburgh, Scotland, by way of Liverpool on RMS Asia, another Cunard vessel. This cover sold for $6,325.

Built over a lifetime by a top philatelist, then photographed and presented by professionals, an auction catalog is an enduring monument to a great collection like this one.