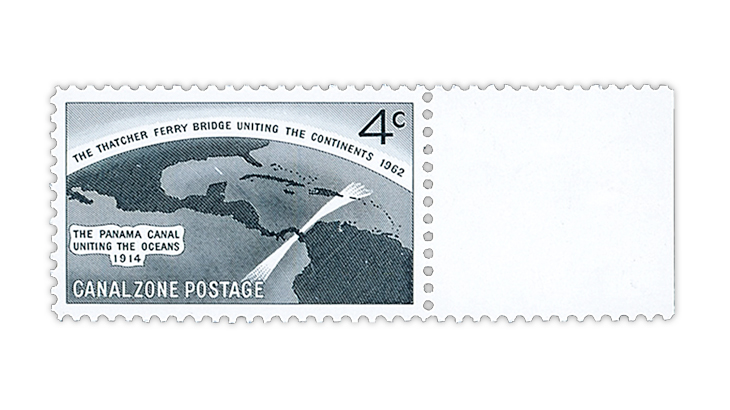 An eye-catching highlight of Daniel F. Kelleher Auctions’ Sept. 20 sale of the Richard Bates collection of Canal Zone errors and varieties is this mint, never-hinged example of the 1962 4¢ Thatcher Ferry Bridge with the silver image of the bridge omitted.

The Richard Bates collection of Canal Zone errors and varieties will be offered during a Sept. 20 sale by Daniel F. Kelleher Auctions in Danbury, Conn. A total of 406 lots will be up for bids starting at 11 a.m. Eastern Time.

In the introduction to the sale catalog, Kelleher provides a brief biography of Bates and a summary of his areas of expertise.

“His major discoveries include characteristics of new plate varieties on 4th series stamps, wrong font varieties on the 2nd printing of Scott Nos. 86, J18, and J19, and locations of these varieties on specific panes,” Kelleher said.

Bates’ exhibits have received top honors at major stamp shows, including the single-frame grand award at the 2014 Chicagopex show, according to Kelleher.

An example of the most well-known Canal Zone error will cross the Kelleher auction block fairly late in the sale: a mint, never-hinged 1962 4¢ Thatcher Ferry Bridge stamp with the silver image of the bridge omitted (Scott 157a).

Kelleher describes the error stamp as a “pristine example” that is “choice in every respect.” A 1998 certificate from the American Philatelic Expertizing Service accompanies the stamp and declares that it is “genuine in all respects.”

The importance of the bridge in the design is apparent from the inscription that runs in an arc across the top of the stamp, “The Thatcher Ferry Bridge Uniting The Continents 1962.”

Just 50 examples of this eye-catching error are available to collectors. A mint single is valued at $8,000 in the Scott Specialized Catalogue of United States Stamps and Covers.

Kelleher provides a helpful summary of the genesis of this famous printing mistake and the legal triumph that preserved its scarcity:

“On Oct. 12, 1962, the Canal Zone issued a stamp commemorating the opening of the Thatcher Ferry bridge across the canal.

“Shortly thereafter, H. E. Harris & Co. discovered the upper right pane with the missing bridge error in its usual shipment of stamps from the Philatelic Agency.

“The Canal Zone authorities ordered 100,000 copies be reprinted for sale to collectors at face value. Harris filed suit for an injunction against the special printing. After a two-and-a-half-year legal battle, he prevailed and halted the reprinting.

“The two intact sheets were laminated and gifted to the Smithsonian and the Canal Zone Library museum and the remainder destroyed, leaving only 50 available for philatelists.”

Kelleher has prepared a single catalog for the Bates Canal Zone collection that is available for viewing and download on the firm’s website, with online bidding options available on Stamp Auction Network.