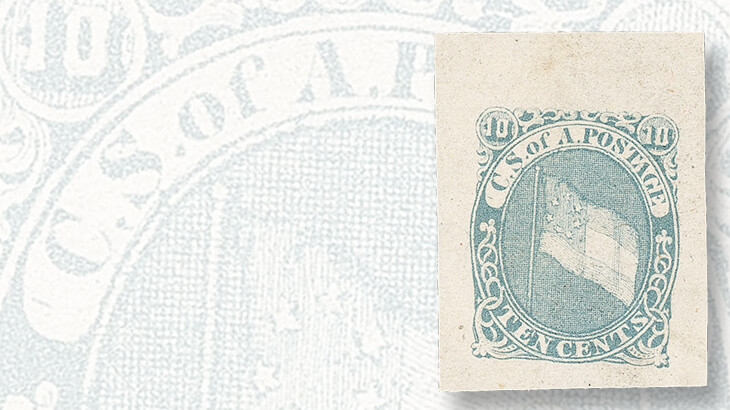 Hoyer & Ludwig, in Richmond, Va., produced this unadopted design for the Confederate States of America. The essay in blue sold at the June 22 Siegel auction for $747.50; a version in black sold for $2,070. 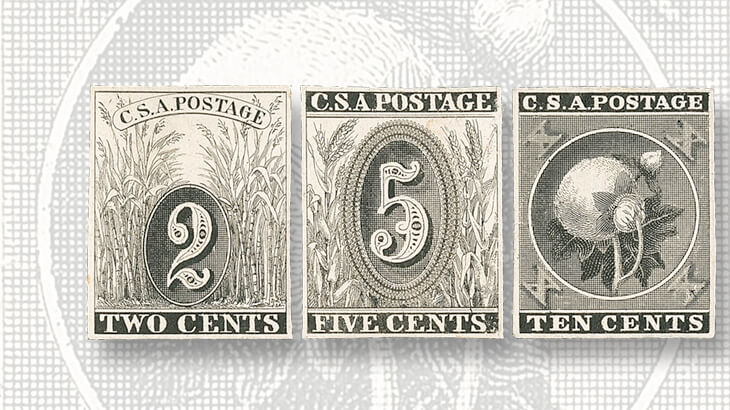 A Baltimore printer, Hoen & Co., prepared some stamp designs depicting Southern crops for the new Confederacy. The designs were not used; a rare set of the essays sold for $16,100 at the June 22 Siegel auction. 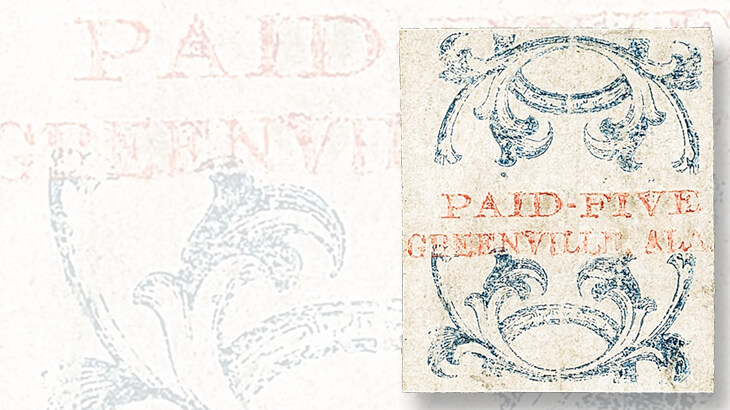 An unused example of the Greenville, Ala., 5¢ postmaster’s provisional, offered for the first time since 1987, fetched $18,400 at Siegel’s June 22 auction. 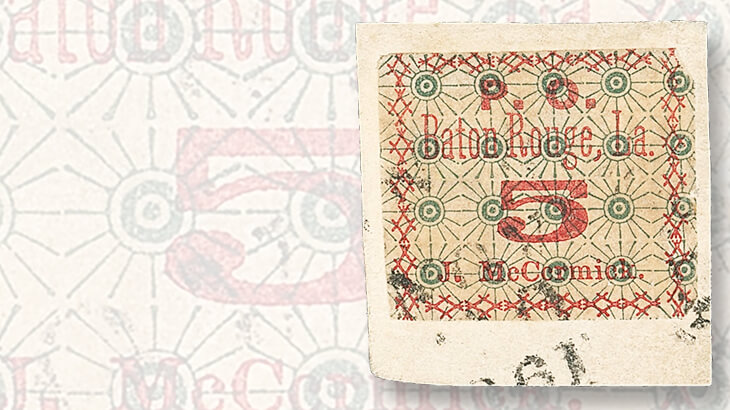 In Siegel’s Civil War sale on June 22, a unique 5¢ Baton Rouge, La., postmaster’s provisional stamp was offered for the first time since 1989. It sold for several times its estimate, bringing $29,900.
Previous
Next

After holding the first part of the Grant Inman sale on June 21, Siegel’s offering of Confederate and Civil War stamps on June 22 included scarce postmasters’ provisionals, as well as some seldom-seen essays for stamps that were never issued.

After the Southern states seceded in 1861, U.S. stamps were declared invalid there. Until the Confederacy could get around to producing its own issues, local postmasters were obliged to get creative and make their own provisional stamps. Some of the results are charming, and most are rare.

A unique Baton Rouge, La., 5¢ red-and-green stamp with criss-cross border and a typo (“McCcrmick”) in the postmaster’s name (Scott 11X3a), used on piece, was offered for the first time since 1989. Although the same typo appears on other varieties of Baton Rouge provisionals, this is the only example of the 5¢ with this border design. It sold for an impressive $29,900, several times its estimate.

An unused example of the Greenville, Ala., 5¢ red-and-blue provisional, one of just four unused and two on-cover examples known, was offered for the first time since 1987. It sold for $18,400.

As the new Confederate government scrambled to source a national stamp issue, it looked at several options, including a printer in Baltimore named Hoen & Co, which produced a set of three proposed designs.

Rather than depicting Thomas Jefferson or Confederate president Jefferson Davis, the stamps showed the staple crops of the South’s slave-based economy: corn, wheat, and cotton.

The Southern postmaster general considered the designs promising, but there was a catch: Baltimore was in the Union.

The printing contract was never awarded.

A Richmond, Va., printer, Hoyer & Ludwig, did print Confederate States of America stamps. An unadopted essay in blue by the firm, showing the seven-star Confederate flag (the real one, not the lately controversial “rebel flag”), sold for $747.50. A similar essay in black, scarcer than the blue, fetched $2,070.