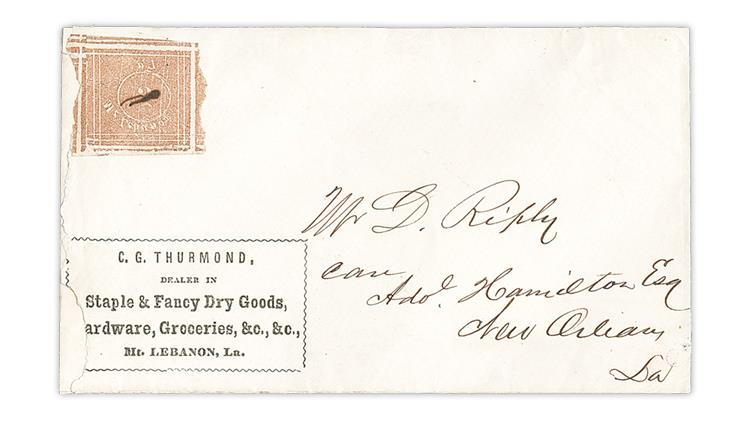 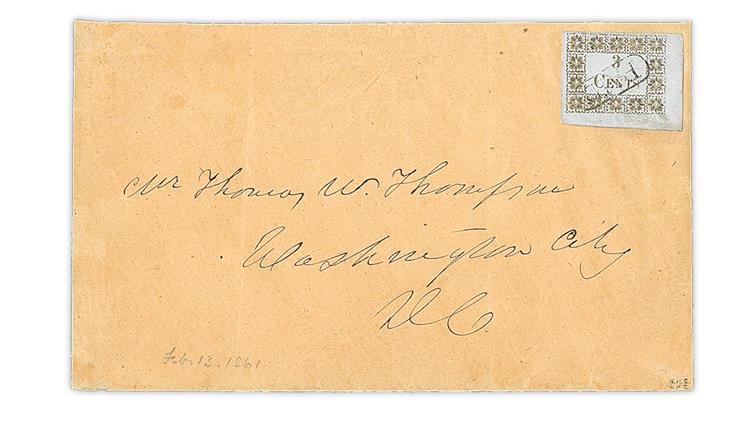 The only known example of the 3¢ Madison Court House postmaster’s provisional stamp on cover will be offered during the Sept. 9 Siegel auction. The stamp from Florida is one of only six surviving examples known. 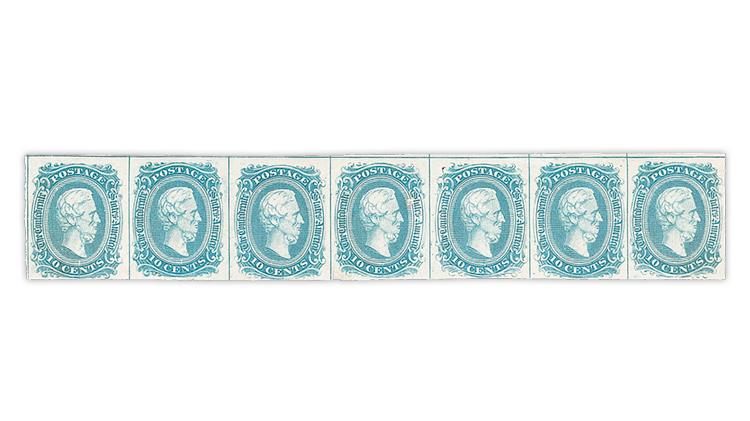 The largest known multiple of the 1863 10¢ blue Jefferson Davis stamp with framelines is this horizontal strip of seven, which will be offered in the Siegel sale of Civil War postal history.
Previous
Next

In the listing on Stamp Auction Network, Siegel refers to the upcoming sale as “one of the most important we have ever held covering this subject area.”

Among the more than 80 lots of Confederate postmasters’ provisionals in this auction are some particularly rare items, including the unique 5¢ stamp from Mount Lebanon, La., and the only recorded example of the Madison Court House, Fla., 3¢ postmaster’s provisional stamp used on cover.

Most of these postmasters’ provisional issues, which are identified and valued in the Scott Specialized Catalogue of United States Stamps and Covers, are quite scarce, and in some cases only one example is known to have survived.

The 5¢ red brown postmasters’ provisional from Mount Lebanon, La., offered in this sale (Scott 60X1), is one example of a stamp that is unique.

The only known stamp is affixed upside down on a bright white cover addressed to New Orleans, with a Mount Lebanon corner card at lower left.

Besides its uniqueness, the Mount Lebanon stamp stands out because the woodcut design is printed as a mirror image of its likely intended appearance. It is believed to be the sole example of a mirror-image stamp in all of philately, Siegel said.

“As anyone familiar with printing knows, the plate used to print an image must mirror the intended design. This principle of typography was missed or ignored by the creator of the Mount Lebanon provisional,” Siegel noted.

The stamp is neatly cut at top and bottom and roughly torn at left and right, causing a tiny tear, according to Siegel.

A rough opening extending up the left side of the cover effectively ties the stamp, according to Siegel, and a piece of backing paper has been affixed behind the left edge of cover for cosmetic purposes.

The magnitude of this cover’s importance is reflected by its remarkable provenance. It was auctioned in Paris as part of the Philipp la Renotiere von Ferrari collection and was later owned by Alfred H. Caspary, A. Earl Weatherly, Charles and Lucy Kilbourne, and William H. Gross. It has been exhibited multiple times in the Aristocrats of Philately display, including at World Stamp Show-NY 2016.

The 2020 Scott U.S. Specialized catalog lists the stamp with a $255,000 value that reflects the sale price at the 2009 Spink Shreves sale of the Gross collection. Since the cover trades very rarely, that Scott catalog figure is noted in italics.

Another provisional uniquity is the 5¢ red Courtland, Ala., handstamped cover (Scott 103XU1), which is also offered in the current sale.

The postage on this cover is also applied from a woodcut. The circular handstamp includes the name Courtland, along with “PAID” and “5,” with the numeral framed by small stars.

The cover is addressed to Athens, Ala.; the two towns are separated by some 20 miles and the Tennessee River in the northern reaches of the state. It is listed by Siegel with the $37,500 value (in italics) found in the Scott catalog.

Postmasters’ provisionals issued before June 1, 1861, were denominated 3¢ in line with the then-current letter rate in the Union. Among these early provisional issues is the 3¢ stamp from Madison Court House, Fla. (Scott 3AX1).

Only six surviving examples of this stamp are known, and the two offered in the Siegel sale are unique in their own way.

The only known Madison Court House stamp on cover is affixed to a buff cover that nicely sets off the bluish paper and gold typeset on the adhesive. The cover is addressed to Washington, D.C., and a Feb. 13, 1861, dateline on a clipped piece (in the same hand as the written address) identifies the cover as the earliest date of any provisional used in the Confederacy, according to Siegel.

The “3 CENTS” vignette is neatly bordered by 14 rectangular floral ornaments, and the stamp on this cover is canceled with a “PAID” oval marking.

Siegel lists the cover with the $120,000 Scott catalog value.

The single off-cover stamp in this auction is the unique variety with “CENTS” misspelled as “CNETS” (Scott 3AX1a), which the Scott catalog lists at $22,500.

There are many covers among the Confederate States issues in this sale, but also a number of unused and off-cover stamps.

The auction offers examples of the 10¢ blue Jefferson Davis stamp with framelines (Scott 10), including the unused horizontal strip of seven with original gum that is the largest recorded multiple.

The strip was formerly in the collections of Josiah K. Lilly and the Kilbournes and is described by Siegel as possessing “wonderful richness of color and depth of impression — a classic early copper plate printing.” It is offered with an estimate of $30,000 to $40,000 against the Scott catalog value of $47,500.

Full details of the Civil War postal history auction, including online bidding options, can be found on the Siegel website.