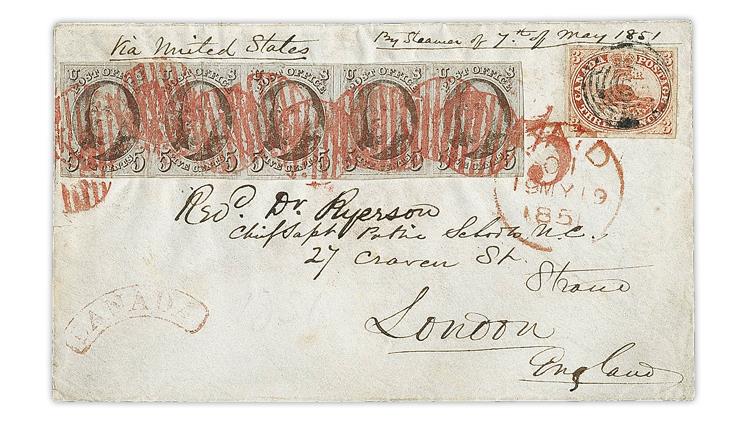 Described as one of the top five most important covers of the United States, the 1851 Beaver cover is franked with the first stamps of both the United States and Canada. It will be offered by Robert A. Siegel Auction Galleries during the firm’s June 22-24 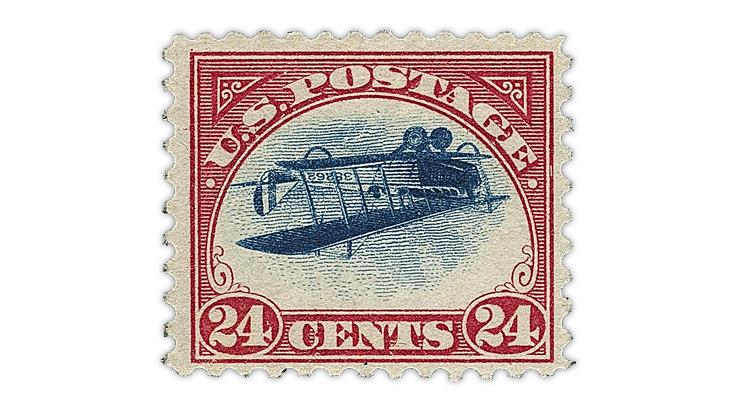 The June 22-24 Siegel auction series will include the position 5 example of the famous 1918 24¢ Jenny Invert airmail error stamp.
Previous
Next

The upcoming Rarities of the World auction from Siegel Auction Galleries contains mostly United States and related material, but the “rarities” descriptor in the name is more than appropriate.

The rarities auction is the third of three Siegel sales taking place beginning June 22 with American free franks and historical documents, continuing June 23 with Civil War special mail routes, and concluding June 24 with the Rarities of the World.

Early in the rarities sale, Siegel is offering a renowned cover of the 1847 first federal stamp issue of the United States.

Known as the Beaver cover, it is franked with the first issues of both the United States and Canada: a horizontal strip of five of the U.S. 1847 red brown Benjamin Franklin stamp (Scott 1) and a single of Canada’s 1851 3-penny red Beaver stamp on laid paper (1).

When mailed in Canada in 1851, just 12 days after the Beaver stamp became available, this letter to London, England, was expected to travel on a steamer departing from New York City.

“The sender affixed Canadian and U.S. stamps in a highly unorthodox, but successful, combination to pay the domestic Canadian postage and the U.S.-Great Britain treaty rate,” Siegel explains in a lengthy history of the cover printed in the auction catalog.

To further entice the collector, Siegel notes that the Beaver cover is “long regarded as one of the top five most important covers of the United States and, by virtue of its dual-country first issue franking, one of the most outstanding covers in all of classic worldwide philately.”

America’s most famous error stamp, the 1918 24¢ carmine rose and blue Jenny Invert airmail (Scott C3a), also makes an appearance in this sale, with the single stamp from position 5 in the discovery sheet of 100.

All the top row examples of this error stamp had a natural straight edge, but this is one of those that was reperforated along the top many years ago. Siegel describes the stamp as well centered with bright colors. One unusual aspect of this particular stamp is that it was the first authentic Jenny Invert error offered in an online-only auction. In 2000, it was sold in an eBay auction, with the proceeds benefitting Mothers Against Drunk Driving.

The 2021 Scott Specialized Catalogue of United States Stamps and Covers lists a value of $450,000 for an unused Jenny Invert in very fine condition with original gum.

Some 30 lots in this auction offer stamps and other material related to the 1901 Pan-American issue, including essays, proofs, first-day covers, and no fewer than eight lots with inverts of the 1¢, 2¢ and 4¢ stamps, including two blocks of four of the 1¢ invert.

The rarities in this sale extend to postal stationery, as Siegel offers an unused cut square of the 2¢ vermilion on manila Andrew Jackson of the 1874 issue (Scott W138). Just two cut squares of this issue are known, along with a full corner and one specimen entire. The Scott catalog value is $25,000.

The back-of-the-book material in this auction includes carriers and locals, revenue stamps, Confederate States, and more.

The worldwide stamps at the end of the auction include two mint, never-hinged examples of Canada's 1959 5¢ red and blue St. Lawrence Seaway stamp with the center inverted (Scott 387a).

The Tuesday sale that begins this auction series offers 186 lots of free franks and historical documents, with 100 or so different presidential franks extending from George Washington through Ronald Reagan. Numerous other presidential autographs and free franks are offered in group lots, along with presidential wives’ signatures. Additional material includes signed covers by astronauts, documents signed by many other historical figures, and personal cookbooks and notes that were once the property of Marilyn Monroe.

Siegel advises that attendance at these auctions is limited to prior approval subject to COVID-19 rules. Live bidding is an option on the Siegel website or by telephone.