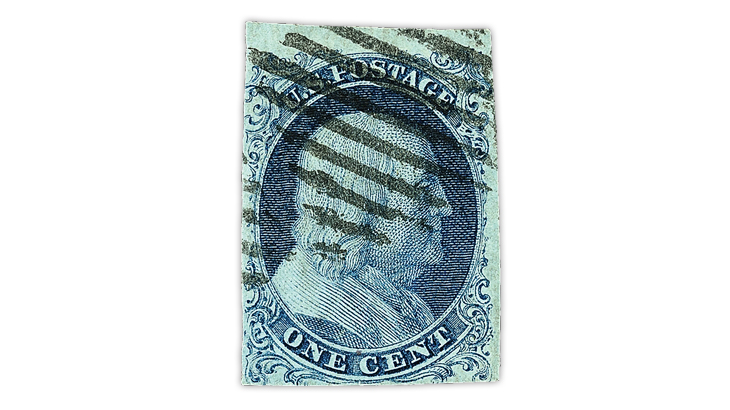 The May 1-2 Siegel auction of United States stamps in New York City includes this used example of the 1851 1¢ blue Benjamin Franklin type I stamp. 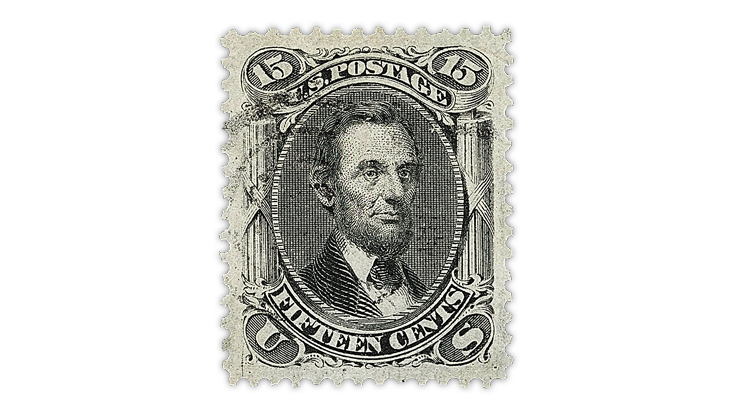 This lightly canceled 1868 15¢ black Abraham Lincoln stamp with F grill has been graded gem 100, the only example to achieve the top grade.
Previous
Next

The Robert A. Siegel auction taking place in New York City May 1-2 is offering classic United States stamps in unused and used condition. The vast majority of the stamps in this sale have claimed top or near-top grades in centering and condition.

At least four different collections contributed items to this 600-lot sale advertised as gem-quality United States stamps. The variety of material ranges from stamps that normally catalog for thousands of dollars to others that would catalog for less than $1 in very fine condition, but these seemingly commonplace stamps are superior graded examples with exceptional centering.

One rarity on offer is a used example of the 1851 1¢ blue Benjamin Franklin, type I from position 7R1E (Scott 5). With “at least 98 unduplicated records of Scott 5” in the Siegel census of this stamp, it is described by the auction firm as the rarest of all U.S. stamps issued regularly prior to the 1868 grilled issues. The stamp is struck with a black New York square grid cancel.

“The example offered here, in sound condition, with a sheet margin at top and with the type characteristics visible, is regarded as one of the finest in existence,” Siegel notes.

The 2019 Scott Specialized Catalogue of United States Stamps and Covers assigns a value of $65,000 for the used stamp, with the value in italics to denote an item that can be difficult to value accurately.

Siegel describes this stamp as having “mathematically perfect centering,” a claim backed by a 2012 Professional Stamp Experts graded certificate that ranks it with a gem 100 grade, “the highest grade awarded and the only example to achieve this grade.”

Siegel cites a Stamp Market Quarterly value of $21,500 for this top grade. Other attributes of the stamp on offer include clear grill points, “unusually wide and balanced margins, bright shade and crisp impression.”

The public auction is taking place at Siegel Auction Galleries on the ninth floor at 6 W. 48th St., New York, NY 10036. Individual lots can be viewed at www.siegelauctions.com, and a PDF version of the auction catalog is also available.