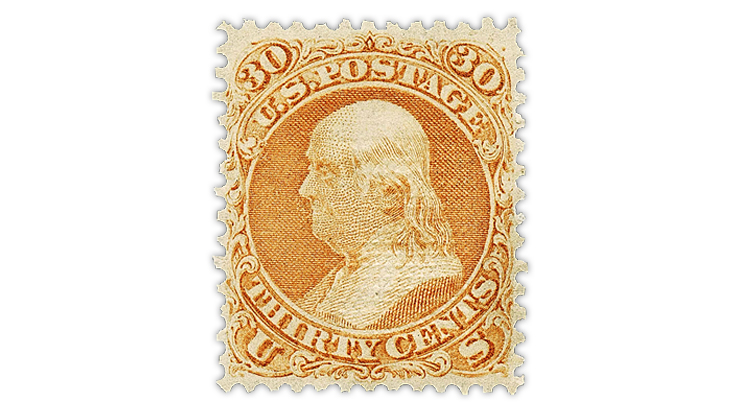 This handsome example of the 1861 30¢ Benjamin Franklin with F Grill will be up for bids during Robert A. Siegel Auction Galleries’ May 27-28 sale of United States stamps. 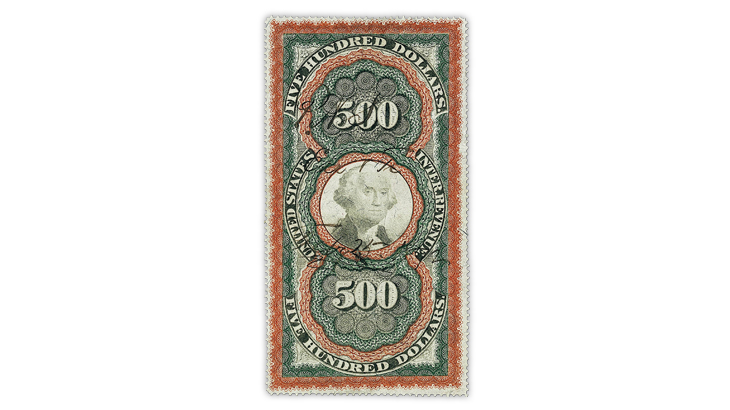 Siegel’s May 29 auction of the “World Traveler” collection of U.S. revenue stamps will include this $500 George Washington with an 1872 manuscript cancel. Revenue collectors call this stamp the Large Persian Rug because of its impressive size and ornate e
Previous
Next

Robert A. Siegel Auction Galleries in New York City will hold two sales May 27-29. United States stamps will be auctioned May 27-28, and the “World Traveler” collection of U.S. revenue stamps will cross the auction block May 29.

Due to the ongoing coronavirus COVID-19 outbreak, both auctions will be held without public attendance at the firm’s Manhattan headquarters. “All live bidding will be by telephone or internet,” according to Siegel.

The two-day U.S. sale features almost 900 lots and opens with an attractive selection of essays and proofs, specimens and postmasters’ provisionals.

All major issues of the classic era of U.S. stamps, from the 1847 issue to the 1920s Fourth Bureau and later issues, are well represented. Unused and used stamps to suit a wide range of collector budgets will be up for bids. Many of the stamps are accompanied by graded certificates.

One of the scarcer stamps from the 1861-68 regular issue in the sale is an unused 1868 30¢ orange Benjamin Franklin with F grill (Scott 100). The stamp has original gum and is described by Siegel as having a “clearly-defined grill with all points easily visible, vibrant color and beautifully balanced margins.”

These desirable attributes are not typically found in examples of Scott 100. Furthermore tight spacing on the printing plate resulted in tight margins particularly at the sides, according to Siegel.

In a footnote to the Scott 100 listing, the Scott Specialized Catalogue of United States Stamps and Covers states: “Values for No. 100 are for examples with small margins especially at sides. Large-margined examples sell for much more.”

A 2020 Philatelic Foundation certificate accompanies the stamp, which Siegel lists at $8,500. In unused condition, the 30¢ Franklin with F grill is valued at $9,000 in the Scott U.S. Specialized catalog.

The May 29 auction of the World Traveler collection of U.S. revenue stamps features almost 300 lots. A number of handsome stamps from the first three issues of 1862-72 open the sale.

Among the more iconic issues available to bidders is a choice example of the $500 red orange, green and black George Washington second-issue documentary stamp (Scott R133), which revenue collectors call the Large Persian Rug because of its intricate engraved design and impressive size.

The used stamp has a light 1872 manuscript cancel and what Siegel describes as “four unobtrusive punch cancels that have been neatly filled or covered.”

A scant 210 examples of this eye-arresting stamp were issued. “A document exists from July 24, 1874, detailing the purchaser of each,” according to Siegel.

Of the issued stamps, Siegel records 87 examples in its online census.

In the sale, Siegel lists the $500 Washington revenue stamp at the Scott U.S. Specialized catalog value of $16,500. A footnote in the catalog explains that the value for Scott R133 is for “a very fine appearing example with light circular cut cancel or with minor flaws.”