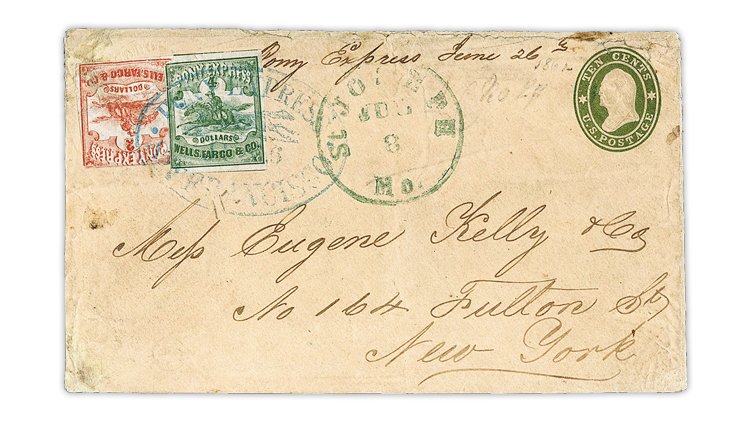 The George Kramer collection of Pony Express covers will be sold by Siegel Auction Galleries Sept. 25. The only recorded cover franked with the $4 green Pony Express stamp is also one of two covers known franked with a combination of Horse and Rider stamp 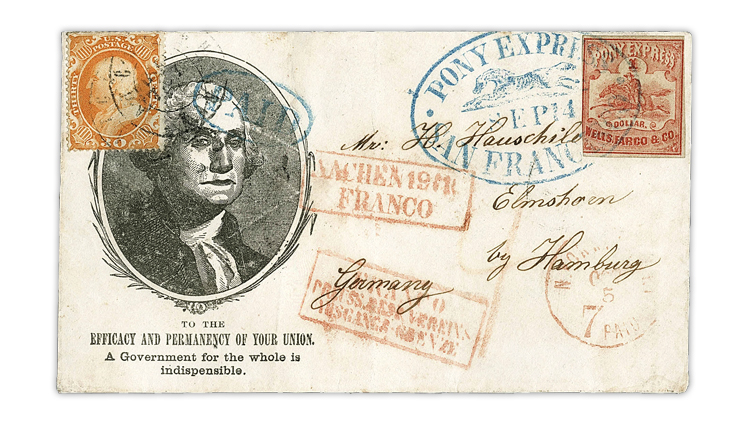 Known as the “Patriotic Pony,” this cover addressed to Schleswig-Holstein under Danish rule is the only patriotic cover among the six Pony Express covers to destinations outside the United States. 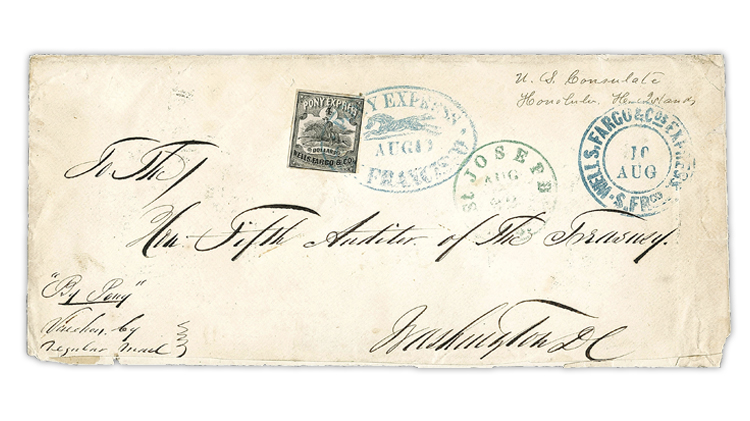 Postal history will rule the day on Sept. 25, when Robert A. Siegel Auction Galleries offers Pony Express covers and more from the George Kramer collection, plus the Clovis collection of Confederate States illustrated covers.

Both auctions will take place at the Collectors Club, 22 E. 35th St., in New York City.

“The Pony covers in this sale are the result of more than 40 years of collecting and studying by George Kramer,” Siegel president Scott R. Trepel wrote in the introduction to the Pony Express auction catalog. “During this time, George has won top awards in competitive exhibitions and co-authored a book on the Pony Express with Richard Frajola and Steven Walske.”

The result is the most important Pony Express collection assembled, described by Trepel as “the first ever to have all Pony Express stamps on cover. The covers and the tales they tell fit into the personal journey of a truly passionate collector and knowledgeable postal historian.”

The sale comprises 33 lots, but the auction catalog fills 79 pages with exceptional detail about the key items offered in this auction plus Trepel’s overview of Pony Express history.

The auction offers many one-of-a-kind items, such as the only recorded cover franked with the $4 green stamp (Scott 143L2). Affixed along with the $2 red (143L1) on the 1860 10¢ green Washington on buff stamped envelope (U33), it is also one of just two examples known with a combination of Horse and Rider stamps.

Another, dubbed the “Patriotic Pony,” is one of just three recorded Civil War patriotic covers carried by Pony Express. Addressed to Schleswig-Holstein, then ruled by Denmark, the cover displays a portrait of George Washington and a quote from his farewell address.

It is one of six Pony Express covers to destinations outside the United States, and the only patriotic cover in that group.

Of the two known covers franked with the $4 black Pony Express stamp (Scott 143L5), the example offered in the Kramer collection is the finer, according to Siegel. Mailed from Honolulu, Hawaii, to Washington, D.C., it is estimated at $300,000-$400,000.