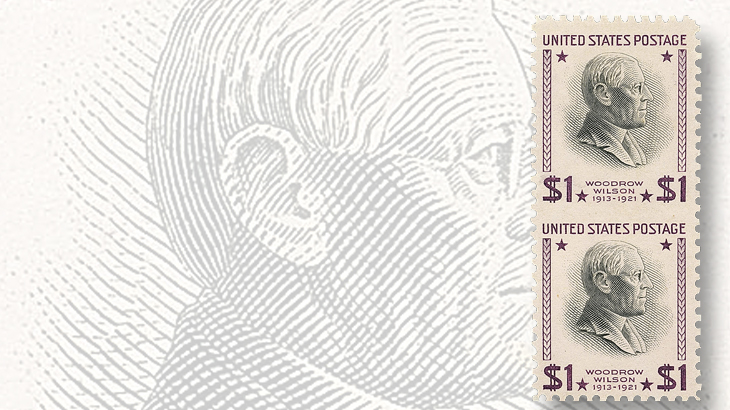 A rare perforation error from the 1938 Presidential definitive issue will be offered in the July 26-27 Robert A. Siegel auction in New York City.

Robert A. Siegel Auction Galleries will hold a two-day auction at its New York City galleries beginning July 26 at 10:30 a.m.

The U.S. possessions represented are Canal Zone, Guam and Hawaii.

Also on offer are a number of older and modern U.S. errors, plus a mint never-hinged single of the 1998 unissued “Yellow Hat” stamp, which is pictured and valued at $3,000 in the Scott Specialized Catalogue of United States Stamps and Covers, but without a catalog number.

The Yellow Hat stamp was originally planned as a postcard rate stamp to be issued in association with the nondenominated (33¢) H-rate Hat stamps, such as Scott 3260 and 3264-3269.

This mint stamp is the first of this issue to be offered by Siegel, the firm reports.

An appealing and rare error in this sale comes from the 1938 Presidential definitive issue, but it is a vertical pair, imperforate between, of the 1954 printing of the $1 Woodrow Wilson stamp in red violet and black (Scott 832f).

Only 10 pairs of this error are known, described by Siegel as the rarest perforation error of the $1 Presidential series stamp, and “a key item for the Presidential Series collector and/or exhibitor.”

Also included are examples of the 1917 5¢ carmine George Washington double error (Scott 467) and the 1917 5¢ rose Washington error (505), both within blocks of stamps bearing the 2¢ denomination that the errors were intended to show.

The 1869 pictorial issue and its 1875 re-issues have significant representation in this sale, with more than 200 lots, including individual stamps and on-cover examples.

Two examples of Scott 119b, the 1869 15¢ brown and blue Landing of Columbus Type II stamp with the center vignette inverted, are among these. The stamps are each listed with the Scott catalog value of $22,500 for a used invert stamp. The second of these two is ex-Ferrary, marked with his purple trefoil backstamp, and struck on the front with a quartered cork and red German transit cancels.

The auction includes 25 lots of Hawaii, with one single extremely fine used example of the 5¢ black manuscript surcharge on the 13¢ dark red King Kamehameha III stamp (Scott 7). This stamp is struck with a San Francisco circular datestamp, and is listed by Siegel with the $10,000 Scott catalog value.