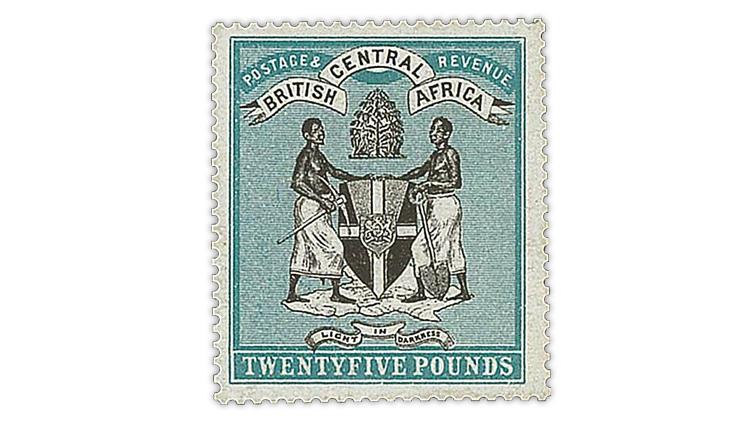 Up for bids during Spink’s April 13 sale of the Blanic collection of Nyasaland and Rhodesia is this attractive unused example of the British Central Africa 1895 £25 blue green and black Coat of Arms stamp, which Spink describes as an “important high denom 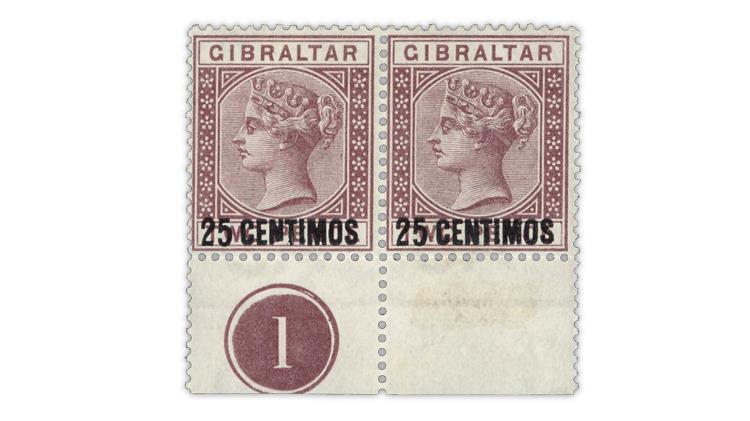 The left stamp in this pair of surcharged Gibraltar 1889 25-centimo-on-2-penny brown violet Queen Victoria stamps shows a desirable variety: the so-called broken “N” in “CENTIMOS.” Spink will offer this pair in its April 14-15 Philatelic Collectors’ Serie
Previous
Next

The Spink auction firm will offer a specialized collection of Nyasaland and Rhodesia during a sale to be held April 13 at the firm’s gallery in London. Following this sale is Spink’s April 14-15 Philatelic Collectors’ Series auction.

A total of 544 lots will be up for bids during Spink’s sale of the Blanic collection of Nyasaland and Rhodesia. All major issues of both countries are well represented in the sale.

Leading off the offerings are 19 lots of the Nyasaland 1891-95 issue. These are stamps of Rhodesia (British South Africa) overprinted “B.C.A.” for British Central Africa, the British territory that changed its name to Nyasaland in 1907.

Spink draws bidders’ attention to this stamp’s good centering and attractive color and notes that the stamp received an expertization certificate from the British Philatelic Association in 1989.

A lovely unused (with part original gum) example of the £25 blue green and black Coat of Arms stamp (Scott 31), the top denomination in the set, is described by Spink as being “fresh and fine” and an “important high denomination rarity.”

According to Spink, this stamp once graced the collection of Richard Tompkins and is accompanied by a 1976 certificate from the Royal Philatelic Society London.

The Scott Classic Specialized catalog value is italicized to indicate that the stamp trades infrequently in the philatelic marketplace.

Among the Rhodesia offerings from the Blanic collection are 175 lots of the popular 1910 Queen Mary and King George V stamps (Scott 101-118), known to collectors as the Double Head issue because each stamp pictures side-by-side portraits of the queen and king.

Specialists of the Queen Mary and King George V stamps will be particularly interested in the various lots that include multiples that “were originally discovered in the printer’s archive,” according to Spink.

Spink states that these items “are without gum, and have hole punctures of varying size.” Spink further advises, “It is recommended that buyers intending to bid on any lot in this section should either view personally or seek condition reports as no lot will be accepted for return on the grounds of condition.”

Spink reports that this all-world sale features stamps from Ascension; France and French Colonies; Gambia; Iraq; Kenya, Uganda and Tanganyika; Madagascar; Rhodesia; South Africa; Sudan and Zanzibar “with a wealth of collections to browse through.”

One of the first items to cross the auction block is a nice collection of Aden that includes two complete mint sets of the 1937 Dhow stamps issued under British administration (Scott 1-12).

The break is visible at the bottom right corner of the letter. The right stamp in the pair is a normal example of Scott 24.

Spink is offering this mint, never-hinged pair with a modest starting bid of £90 ($123). A single unused (previously hinged) example of Scott 24b is valued at $130 in the Scott Classic Specialized catalog.

Spink concludes the sale with nine lots of reference collections. The first is a worldwide selection of stamps, some of which are in an album while others are on album pages or loose in a carton.

Separate catalogs for the Blanic collection of Nyasaland and Rhodesia and the Philatelic Collectors’ Series sales are available as downloadable PDF documents. Online bidding options are available after registering in advance with the firm.