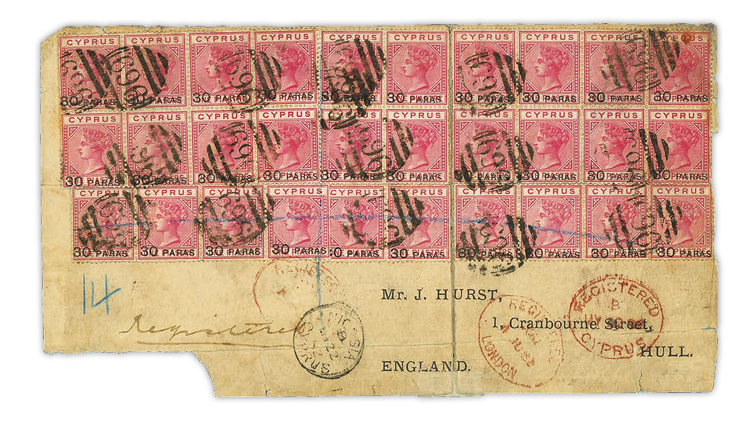 Among the highlights of the Spink Collectors’ series sale July 10-11 in London is this registered cover front sent May 22, 1882, from Nicosia, Cyprus, to Hull, England. It is franked with 30 1882 30-para on 1-piaster rose Queen Victoria stamps (Scott 17).

The Spink auction firm will conduct an auction of top-shelf stamps and covers July 10-11 at its galleries in London.

Among the highlights of the firm’s Philatelic Collectors’ series sale are the Michael Lewis collection of Malta and the “Rothman” collection of Rhodesia postal history and cancellations.

Other significant holdings to cross the Spink auction block during the two-day sale include late 18th- and early 19th-century covers from Cape of Good Hope, an impressive array of essays and proofs from Ceylon, what Spink describes as “outstanding” Cyprus Queen Victoria key type issues, covers from Northern Rhodesia and Southern Rhodesia, and an extensive selection of Great Britain stamps and postal history with an emphasis on “line-engraved issues.”

Also up for sale are various large lots and collections.

A featured item in the Cyprus Queen Victoria offerings is a commercial registered cover front sent May 22, 1882, from Nicosia, Cyprus, to Hull, England.

The cover is franked with 30 examples of the 1882 30-para on 1-piaster rose Queen Victoria stamp (Scott 17), one of which, according to Spink, shows the flat-topped “c” plate flaw.

Spink notes that the cover once resided in the Col. J.R. Danson collection. The firm describes the cover as a “remarkable item paying a ten times rate plus registration.”

The Spink Philatelic Collectors’ series sale catalog is available as a downloadable PDF document. Online bidding options are available after registering in advance with the firm.