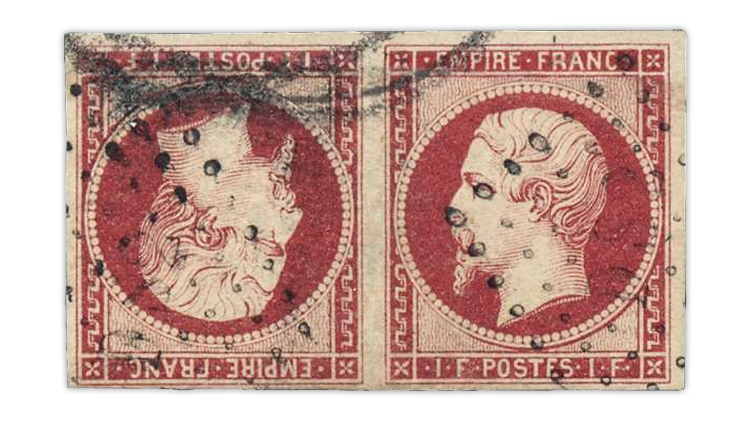 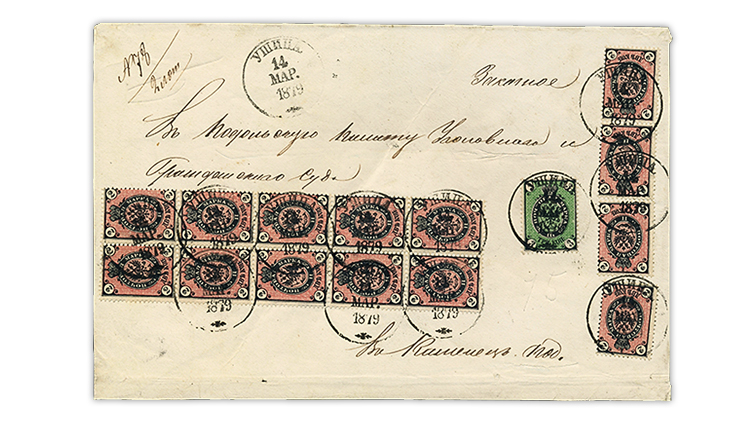 The franking on this 1879 registered cover from Russia in the Gaertner sale includes 14 of the 1875 2-kopeck black and red Arms issue. The vertical block of 10 is the largest known multiple for this issue.
Previous
Next

The Oct. 14-18 Christoph Gaertner philatelic auction in Germany is organized in seven catalog volumes of stamps, postal history and large lots from around the world.

Two catalogs are dedicated to the Far East: one for China and another for general Asia.

Another two catalogs cover the world by country and by topic.

An eighth catalog is focused on picture postcards.

The wide range of offerings provides opportunities for collectors at all levels, with more than a few surprising rarities in the mix.

A tete-beche pair of the imperforate 1853 French 1-franc carmine Emperor Napoleon III stamp has the portrait of France’s final monarch positioned upside down on one stamp, looking directly at his right-side-up companion.

The stamps are postmarked with a DS2 dotted lozenge cancel and have been repaired, according to the pair’s 2018 Pascal Scheller certificate.

A postal history offering from Russia is a registered mail cover franked with 15 stamps: 14 of the 1875 black and red 2-kopeck on vertically laid paper including a vertical block of 10, plus one 3k stamp.

The block of 10 is the largest known multiple of this already scarce variety.

The United States offerings include numerous stamped envelopes, both used and unused.