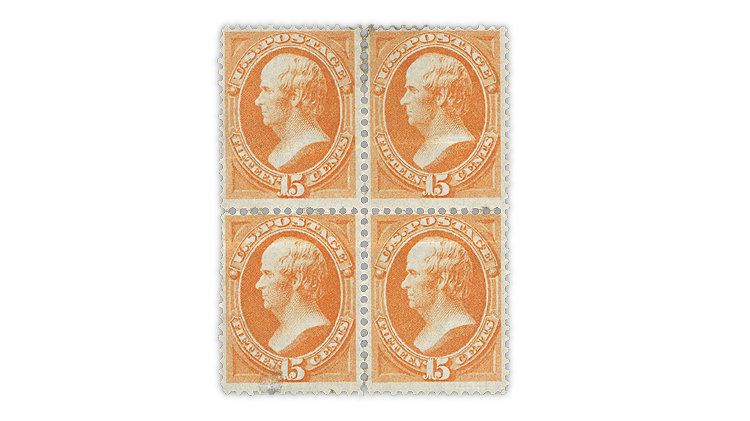 The April 25-28 Schuyler J. Rumsey auction at the Westpex stamp show in California includes United States and worldwide stamps and postal history. This unique unused block of four of the U.S. 1870 15¢ orange Daniel Webster stamp with I grill is among the

The stamp show runs Friday through Sunday at the hotel.

Leading off the regular issue selections is a blue folded letter franked with a horizontal pair of the 1847 5¢ red brown Benjamin Franklin stamp (Scott 1). The letter was mailed in St. Louis, Mo., on July 1, 1851, the first day of demonetization for the 1847 stamps, meaning they were no longer valid for the payment of postage.

Among the U.S. stamps on offer is a unique unused block of four of the 1870 15¢ orange Daniel Webster stamp with I grill (Scott 141A). Three singles and this block of four are all that are known unused.

Rumsey describes the block as having a large part original gum, strong bright color and crisp impression, with a horizontal crease through each stamp and a filled thin on the bottom left stamp.

The Rumsey auction listing notes a value of $66,000 by calculating four times the Scott value of $16,500 for a single unused stamp.

The general sale opens Thursday morning with a selection of U.S. coins followed by stamps of Great Britain, British Commonwealth and the world.

Two specialized sales are planned for Saturday. The first offers more than 310 lots of classic stamps and postal history of Ecuador.

The second offers the David Patterson collection of New Zealand, with more than 480 lots of stamps, postal history, precursors, proofs and more.

The stamps include examples of the 1855 London printing, with an unused (without gum) example of the 1-penny dull carmine Queen Victoria Chalon head stamp with large star watermark (Scott 1). Rumsey describes this stamp as “full margins and fresh bright color, extremely fine and choice.”

The unused stamp is listed in the 2019 Scott Classic Specialized Catalogue of Stamps and Covers 1840-1940 with a value of $85,000. That value is in italics to denote an item that can be difficult to value accurately.

The three auction catalogs prepared for the Westpex sales can be viewed online at www.rumseyauctions.com, or downloaded from the same site as PDF files.