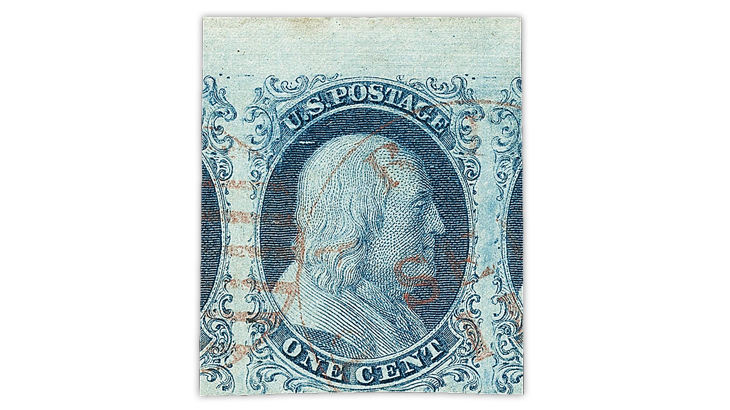 This example of the rare 1851 1¢ blue Benjamin Franklin type I stamp has the highest grade awarded to this variety. It will be offered during the April 8-9 Siegel auction of classic United States stamps and covers. 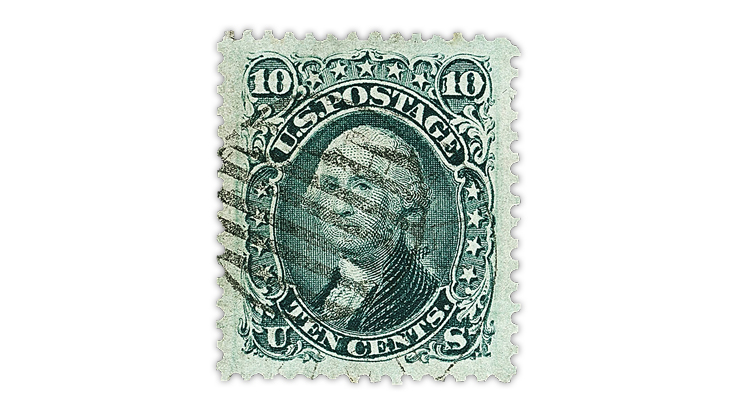 Seven stamps in the upcoming Siegel auction are graded 100J, with mathematically perfect centering and jumbo margins. This example is the 1861 10¢ green George Washington struck with a clean black grid cancel. 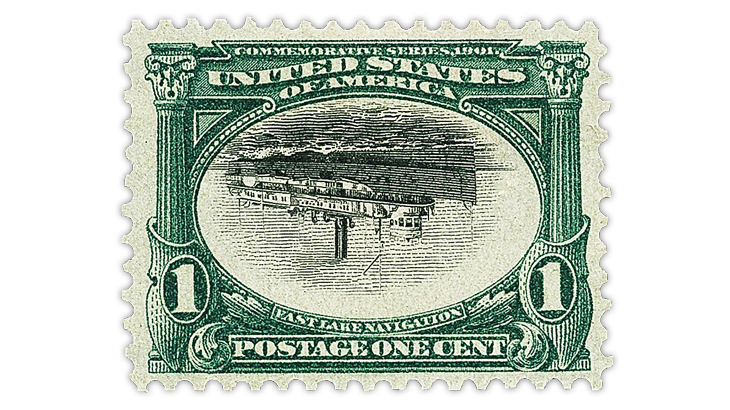 The 617 auction lots from the Edward Morton collection are also posted on the Siegel website with online bidding options available. The sale is being conducted in four sessions over two days.

“The collection offered in this sale catalogue comprises used stamps from 1845 through the 1901 Pan-American Issue,” Siegel president Scott Trepel wrote in his introduction to the auction. “From the 1890 Issue on, there is a parallel representation of stamps in original-gum condition, many Mint Never-Hinged.”

The quality throughout the auction is very high, with 27 stamps grading 100 to indicate mathematically perfect centering, including seven that achieved the 100J (for jumbo margins) distinction.

The first two lots listed are both covers, each franked with one of the 1845 10¢ black St. Louis postmaster’s provisional stamps on greenish paper (Scott 11X2). Because its vignette shows two standing bears as part of the Missouri state seal, this stamp and others from the same issue are known as the St. Louis Bears.

In each instance, the stamp is tied to the cover with a red St. Louis circular postmark without a pen cancellation, and with a red PAID handstamp struck on the cover.

The 2020 Scott Specialized Catalogue of United States Stamps and Covers values the 10¢ St. Louis Bears stamp on cover at $14,000, but notes that “Covers with the stamps tied by handstamp sell at considerable premiums depending upon the condition of the stamps and the general attractiveness of the cover.”

Both covers are described by Siegel as very fine.

From the 1851-56 issue comes a top example of the 1¢ blue type I Benjamin Franklin stamp from position 7R1E on the sheet (Scott 5).

The rare stamp is canceled by a light but clear strike of a red grid and a matching Darien (Ga.) circular datestamp.

Siegel describes the stamp as having “huge margins to barely touched at bottom, including large sheet margin at top, with significant parts of adjoining stamps at sides — both of which are Type Ib (Scott 5A).”

The stamp has achieved the highest grade awarded for the Type I 1¢ Franklin, extremely fine 90 jumbo. Only one other example of this stamp is similarly graded and none surpass it.

Among the seven stamps in this auction graded 100J is an 1861 10¢ green George Washington stamp (Scott 68) struck with a clean black grid cancel.

Describing the stamp as having bright color and a crisp impression, Siegel also notes that it is the only perforated stamp prior to the 1869 pictorial issue to achieve the perfect 100J grade.

The stamp is accompanied by four certificates (two from PSE, including a 2013 graded certificate, and two from the Foundation). Siegel cites a Stamp Market Quarterly valuation of $8,000 for a stamp grading 100, because the stamp is unpriced in the 100J grade.

The Morton collection offers highly graded examples of the nine values of the 1898 Trans-Mississippi Exposition issue (Scott 285-293), with mint and used examples of each stamp except the $2, which is near mint with original gum and a single hinge mark at top.

A familiar U.S. error is also on offer in the Siegel auction: the 1¢ Fast Lake Navigation stamp with the black center inverted (Scott 294a), from the 1901 Pan-American Exposition issue.

The green stamp with black center is one of three denominations from that set that are known with the center inverted. Siegel describes this unused stamp as extremely fresh, lightly hinged and incredibly well centered with deep dark colors.

The stamp’s 2011 PSE certificate grades it as very fine-extremely fine 85, with only six 1¢ inverts grading higher, at extremely fine 90.

The description in the auction catalog makes note of a Stamp Market Quarterly valuation of $19,500 for the unused 1¢ invert at the 85 grade.