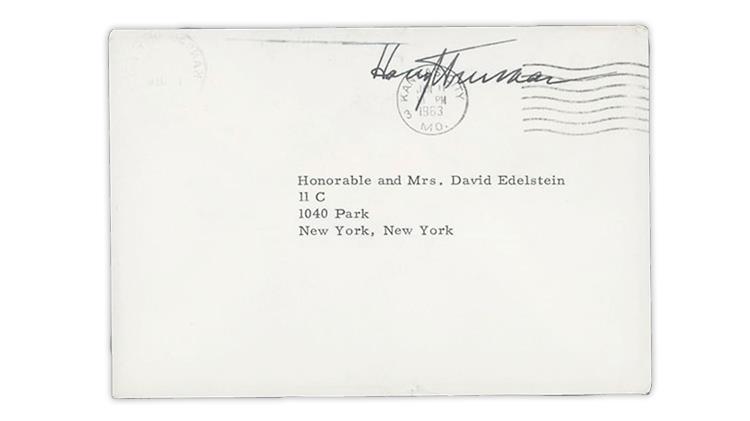 Daniel F. Kelleher Auctions’ Sept. 2-3 Flagship sale of United States, British and worldwide stamps and postal history includes this 1963 free-frank cover bearing the signature of Harry S. Truman. Kelleher describes the cover as “a very rare item, as it i 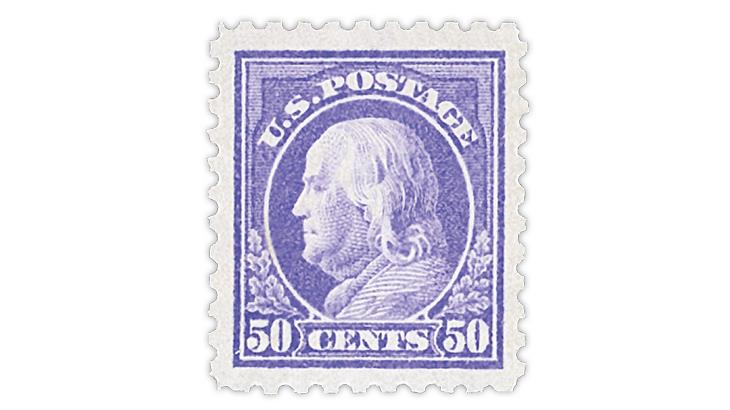 This U.S. 1915 50¢ violet Benjamin Franklin stamp with a 2008 graded extra fine-superb 95J certificate from Professional Stamp Experts will be up for bids during the Kelleher Flagship auction.
Previous
Next

Overall the emphasis is on U.S. material, which consists of 767 of the 888 lots being offered in the two-day sale.

A handful of name collections will be sold during the auction, including additional items from the Best Family collections, the John L. Davis estate of U.S. and airmail covers, the Richard J. Kates collection of high-quality United States, and the Kanai collection of U.S. private perforation vending controls. The properties of 39 other consignors also will be up for bids.

The first day of the sale, Wednesday, Sept. 2, will feature 446 lots of British Commonwealth, Europe and colonies, Asia and Latin America, and U.S. stamps and postal history.

Among the postal history highlights is a free-frank cover bearing the signature of former President Harry S. Truman mailed Jan. 11, 1963, from Kansas City, Mo., to David Edelstein and his wife in New York City. The Kansas City machine cancel partially obscures Truman’s signature in the top right corner of the cover.

According to Kelleher, “Edelstein was appointed by Truman to the U.S. District Court for the Southern District of New York in 1951, serving until his death in 2000.”

Kelleher describes the cover as “a very rare item, as it is postally used (not a favor cancel).”

Included with the cover is this preprinted thank-you note: “Mr. and Mrs. Harry S Truman deeply appreciate your holiday greetings and send you their best wishes for the New Year.” A 2020 Philatelic Foundation certificate also accompanies the cover.

Collectors of the popular Washington-Franklin series will see a robust number of choice stamps cross the Kelleher auction block, including a wonderfully centered, mint never-hinged example of the 1915 50¢ violet Benjamin Franklin stamp (Scott 440).

Kelleher describes the stamp as possessing “bold and bright” color and “beautifully balanced” margins. The firm notes that Professional Stamp Experts has expertized the stamp twice: in 1999 and in 2008, when PSE assigned it the grade of extra fine-superb 95J. The “J” designation signifies a stamp with jumbo margins.

In the grade of XF-S95 (without the jumbo designation), a mint, never-hinged example of Scott 440 is valued at $4,500 in the Scott Stamp Values-U.S. Specialized By Grade section of the Scott U.S. Specialized catalog.

A single catalog has been prepared for the two-day Flagship auction and can be viewed on the Kelleher website, with online bidding options available.