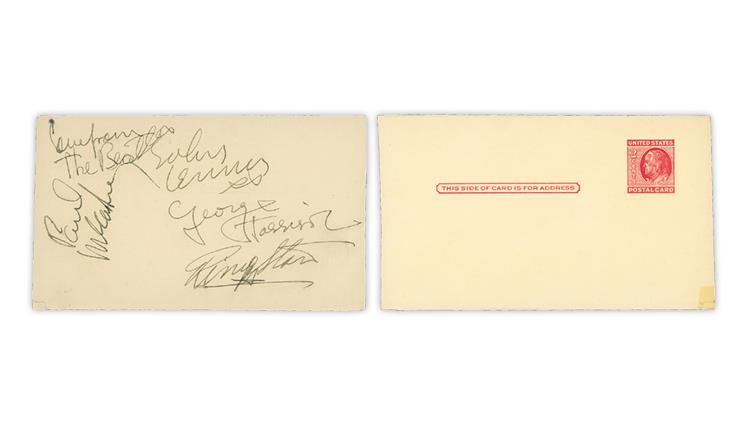 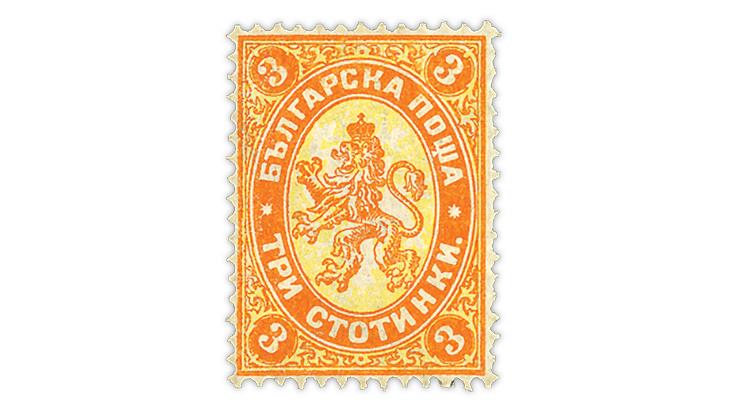 Among the Europe and colonies rarities up for bids in the Kelleher Flagship auction is an unused 1882 Bulgarian 3-stotinki orange and yellow Lion of Bulgaria with the background inverted.
Previous
Next

A diverse array of British and worldwide stamps and postal history will be up for bids when Daniel F. Kelleher Auctions holds its Flagship sale July 15 at the firm’s gallery in Danbury, Conn.

Highlights of the auction include the Robert Penn collection of Spain and colonies; the William D. Newcomb collection of Mexico, Canada and British North America; the David Pitts collection of Bermuda, Prince Edward Island and British Atlantic postal history; the Patrick Giddings collection of France; and “a vast array of interesting items from multiple consignors,” according to Kelleher.

The single-day auction opens at 10 a.m. with 163 lots of British Commonwealth material. Perhaps the most unusual item among the nine Great Britain lots is a United States 1951 2¢ carmine rose Benjamin Franklin postal card (Scott UX38) featuring the signatures of the four members of the Beatles rock band on the message side of the card.

“Love from The Beatles” is written in the top left corner. Paul McCartney’s signature reads up the left side of the card. The signatures of John Lennon, George Harrison and Ringo Starr appear from top to bottom at right. Kelleher describes the four signatures as being “clean and as fresh as the day they were written.”

Included with the signed Franklin postal card is a presentation pack of Great Britain’s 2007 Beatles Album Covers stamps, which includes the six stamps (2421-2426) and the souvenir sheet of four (2420). Kelleher says that the pack provides “a fun and colorful backdrop” to the card.

Following the British Commonwealth offerings are 188 lots of Europe and colonies; seven lots of Asia, Africa and the Middle East; and 122 lots of Latin America, with particular strength in Mexico.

Among the Europe and colonies rarities up for bids is an unused 1882 Bulgarian 3-stotinki orange and yellow Lion of Bulgaria with the background inverted (Scott 12a).

Kelleher states that “prior to 2009, most references in various Bulgarian stamp handbooks and catalogues held that this error only existed used, only nine of which had been recorded.”

The error stamp in the sale is “believed to be the only unused example,” according to Kelleher.

Kelleher describes the stamp as having “bright vivid colors, excellent centering and full o.g. [original gum] which is lightly hinged.”

The catalog for the Kelleher Flagship sale can be viewed on the firm’s website, with online bidding options available.