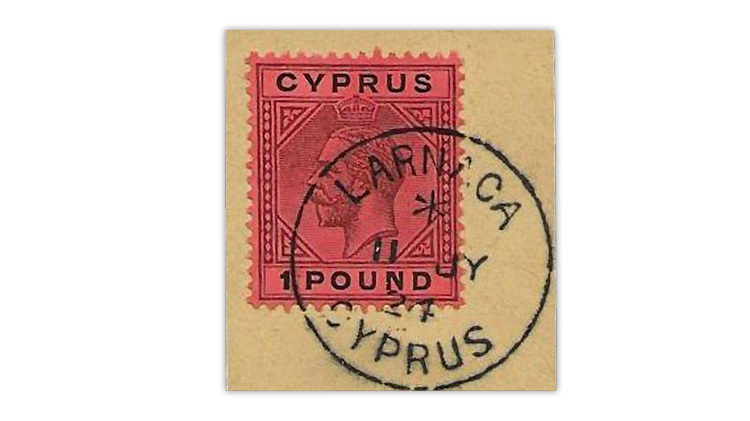 This attractive on-piece example of the Cyprus 1912 £1 violet and black King George V stamp on red paper will be up for bids during Dutch Country Auctions’ Jan. 19-21 sale in Wilimington, Del. The 1924 circular datestamp tying the stamp to the piece is fr

Dutch Country Auctions will conduct a sale of United States and worldwide stamps and covers Jan. 19-21 at the firm’s office in Wilmington, Del.

Due to current COVID-19 restrictions, there will be no in-person attendance for this auction, according to Dutch Country.

Dutch Country states that the three-day sale includes “many better singles and many good collections and accumulations.”

“This auction is very strong with good varieties of U.S. and worldwide covers. There are 390 cover lots of all types. The U.S. section features a great collection of revenues cataloging over $30,000.”

The Jan. 19 session opens with 140 lots of U.S. covers and postal stationery. Also up for bids will be first-day covers, postcards, worldwide covers, U.S. 19th- and 20th-century stamps, and U.S. accumulations and bulk lots.

One nice lot is a group of 12 U.S. inaugural covers. Dutch Country notes that the group includes covers for all four of Franklin D. Roosevelt’s inaugurations. Featured cachetmakers include Staehle, Knapp, Fluegel and Crosby, according to Dutch Country.

U.S. collections and large lots open the Jan. 20 session, which also includes the first half of the worldwide stamp offerings.

Included in the 16 lots of Cyprus is a handsome on-piece example of the 1912 £1 violet and black King George V on red paper (Scott 88) that Dutch Country describes as a “showpiece.”

A bold, complete strike of a July 11, 1924, Larnaca, Cyprus, circular datestamp neatly ties the stamp to the piece.

Against a Scott Classic Specialized Catalogue of Stamps and Covers 1840-1940 value of $3,250, Dutch Country is offering this used King George V stamp with an opening bid of $800.

Among the topical offerings is a substantial collection of hundreds of Walt Disney stamps housed in nine volumes. The stamps were issued from 1979 through the 1990s, and Dutch Country’s “spot check” reveals that all the stamps appear to be different and in never-hinged condition.

Dutch Country describes this Disney collection as being “great for expansion or breakdown for retail sales” and lists it with an opening bid of $500.

The lots in the upcoming Jan. 19-21 auction can be viewed on the Dutch Country website and at Stamp Auction Network, where online bidding is available.