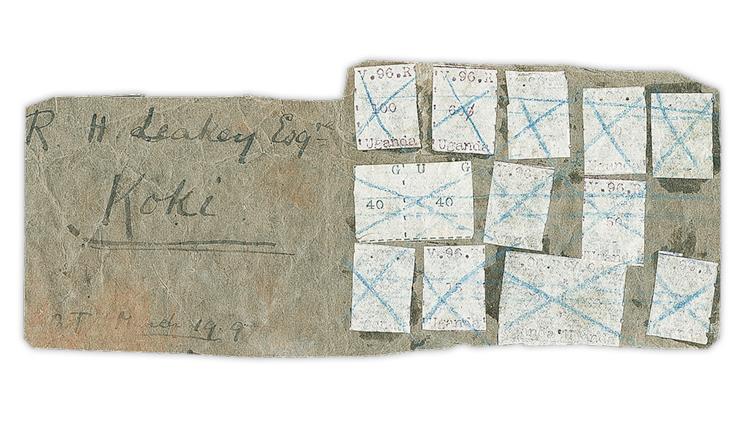 This 1897 parcel piece franked with 14 typewritten stamps is one of the stellar items from the extensive John Griffith-Jones collection of the typewritten and typeset Missionary issues of Uganda that Robert A. Siegel Auction Galleries will offer in a sale to be held March 15. The typewritten stamps were produced by the Rev. Ernest Millar of the Church Missionary Society. 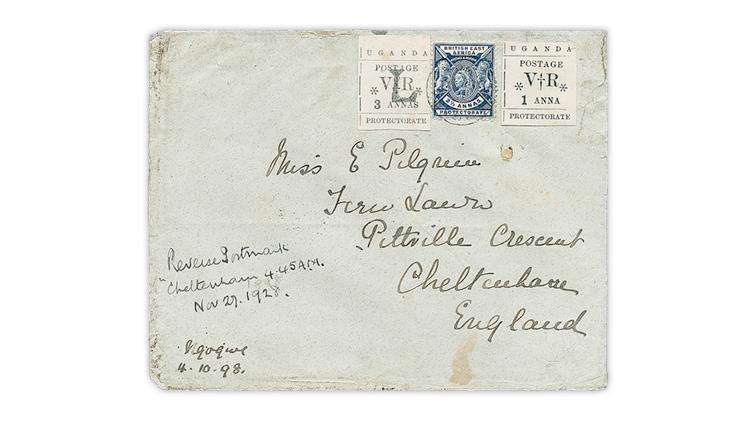 One of the more remarkable covers in Siegel’s auction of the John Griffith-Jones collection was mailed in 1898 from Uganda to England. It is franked with an 1896 typeset 3-anna black stamp overprinted “L” in black used in combination with an 1896 typeset 1a black stamp with thick “1” and a British East Africa 1896 2½-anna dark blue Queen Victoria stamp.
Previous
Next

The extraordinary collection of the 1895-99 Missionary typewritten and typeset issues of Uganda formed by John Griffith-Jones will be presented to bidders during Robert A. Siegel Auction Galleries’ March 15 sale in New York City. The sale is being held in association with Charles F. Shreve, director of Siegel International.

Griffith-Jones meticulously assembled his collection “at an extremely opportune moment in philately,” said Siegel in the introduction to the auction catalog.

“Until the passing of Dr. Gene Scott, who assembled an outstanding collection of these issues, it was impossible to achieve the level of depth and breadth evident in the Griffith-Jones collection,” Siegel said.

The typewritten Uganda Missionary stamps are the creation of the Rev. Ernest Millar of the Church Missionary Society. Millar used a typewriter to produce the primitive stamps on thin laid paper.

According to the Scott Classic Specialized Catalogue of Stamps and Covers 1840-1940, the typewritten Missionary stamps (Scott 1-53) were 20 millimeters to 26mm wide “with nine stamps in a horizontal row. Later two more were added to each row, and the stamps became narrower, 16-18mm.”

“Rev. Millar got a new typewriter in 1895, and the stamps he typed on it have a different appearance. A violet ribbon in the machine, inserted late in 1895, resulted in Nos. 35-53.”

Griffith-Jones’ accomplishment in forming this collection is all the more remarkable because of the fragile nature of the stamps and the extremely limited amount of surviving postal history.

“The survival rate of covers with the Uganda Typewritten Issues is miniscule. Only 24 covers or fronts are recorded, which is not surprising,” Siegel said.

“Uganda was a remote, tropical region, and little interest was shown by the local population in saving stamps on covers. While philatelic interest surged in Great Britain, Europe and the United States in the 1890s, the primary focus was on the stamps, not covers.”

The typewritten stamps are often found with noticeable wrinkles because of the thin paper.

Siegel cautions that covers franked with the typewritten and typeset Missionary stamps were regularly folded “in order to be carried by cleft sticks by runners and postmen.”

Both types of stamps were issued without gum, and the gum used locally “while sufficient to affix the stamp to [a] cover, was not of modern standards. This often caused staining on the already delicate stamps,” according to Siegel.

One of the showpiece items in the collection is an 1897 parcel piece franked with 14 typewritten Missionary stamps (two pairs, 10 singles) with a total face value of 500 cowries.

Siegel points out that the denomination imprint of the 60c stamp, the second stamp in the top row of the franking, erroneously reads “600.” This was corrected by putting a slash through the second “0.”

“We are unaware of any other cover or piece which comes remotely close to the size of the 500 cowries franking this piece displays,” Siegel said.

“One could only make assumptions and speculations as to what this parcel may have been carrying to warrant such a large franking, especially when the typical rate for a single-rate cover was 20 cowries.”

Siegel notes that this exceptional piece of postal history, which once resided in the Gene Scott collection, was unknown to collectors before dealer Ritchie Bodily first brought it to the market in 1986. The piece is accompanied by a 2020 expertizing certificate from the British Philatelic Association.

Fortunately for collectors, the recipient of the parcel, the Rev. Richard Herbert (written “R. H.” on the piece) Leakey, “is a well-known recipient of early Uganda mail, as many of the surviving covers are addressed to him,” according to Siegel.

Siegel is offering this parcel piece addressed to Leakey and franked with 14 Uganda typewritten Missionary stamps with an estimate of $50,000 to $75,000.

Noticeably more postal history of the typeset Missionary stamps exists today, and the Griffith-Jones collection is replete with many such covers franked with these issues.

According to Siegel, “The ‘L’ Overprints were created by Robert Racey, a young postal official in Kampala, by using a carved eraser. Its function was for auditing purposes, the ‘L’ indicating local uses only within Uganda.”

Siegel states that only 17 intact covers or cover fronts franked with typeset stamps bearing the “L” overprint are recorded.

A single softcover catalog has been prepared for the sale of the John Griffith-Jones collection. Full details of the auction, including a downloadable version of the catalog and online bidding options, are available on the Siegel website.