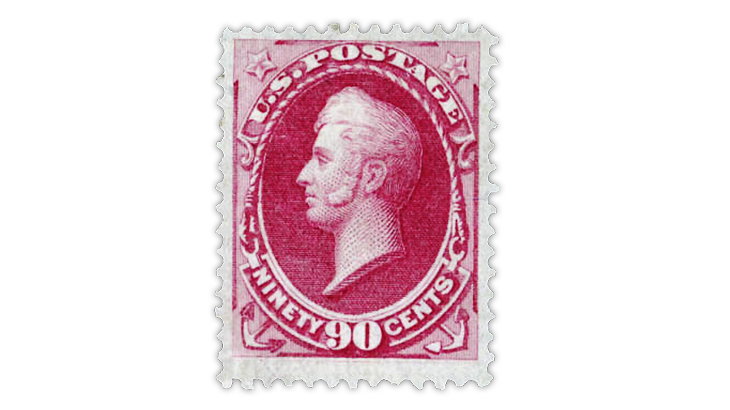 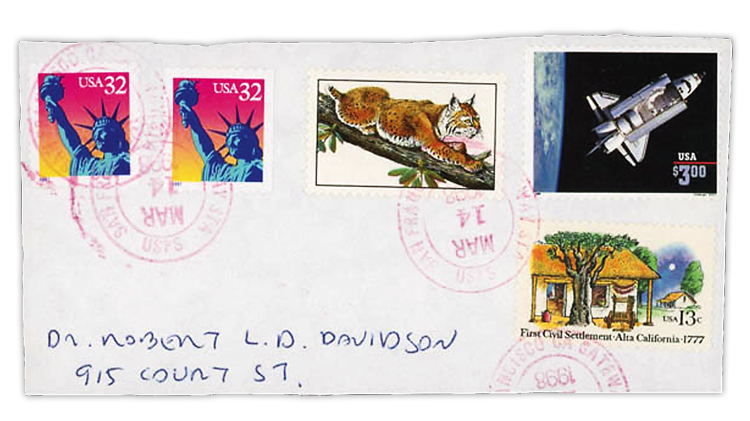 The second day of the Kelleher Flagship sale will include an example of the 1990 $2 Bobcat definitive stamp with the engraved black “$2 USA” inscription omitted, used on piece in combination with four other stamps.
Previous
Next

A handsome selection of United States and possessions stamps will be up for bids when Daniel F. Kelleher Auctions holds its Flagship sale Feb. 18-19 at the firm’s gallery in Danbury, Conn.

Classic-era U.S. stamps will be featured during the Tuesday session that begins at noon Eastern Time. The Wednesday session also begins at noon and will comprise U.S. 1913-97 definitive (regular-issue) and commemorative stamps, airmail and back-of-the-book issues, Confederate States and U.S. possessions.

Among the definitive stamps printed by the National Bank Note Co. during 1870-71 that will be offered during the sale is an unused example of the 90¢ carmine Oliver Hazard Perry with H grill (Scott 144).

The grill, a type of embossing applied to U.S. stamps from 1867 to 1870, was used to prevent reuse of stamps by breaking the fibers of the paper so that cancellation ink would penetrate more deeply and be harder to remove.

Kelleher describes the grilled 90¢ Perry stamp as having a “vibrant shade” and “crisp proof-like impression.” The firm lists the stamp with an estimate of $12,000 to $15,000. Two expertization certificates accompany the stamp: one from the Philatelic Foundation in 1983, and one from Professional Stamp Experts in 2019.

In the grade of very fine, the stamp is valued unused at $25,000 in the 2020 Scott Specialized Catalogue of United States Stamps and Covers.

For those seeking perfection, Kelleher is offering a $5 Alexander Hamilton (Scott 1053) with a 2017 PSE certificate that assigns the lofty grade of gem 100 to the stamp. Kelleher estimates this impressive stamp at $400 to $600.

According to the PSE population report, 28 $5 Hamilton stamps have received the gem 100 grade from PSE, while just two have graded higher, at gem 100J, for jumbo margins.

The 1990 $2 Bobcat definitive stamp exists with the engraved black “$2 USA” at lower left omitted (Scott 2482a). A used example of this subtle error, which Kelleher describes as “tied on large piece with additional stamps,” is listed with an estimate of $200 to $300.

Light strikes of a March 14, 1998, circular datestamp from San Francisco tie the $2 Bobcat error and four other stamps to the piece.

According to the Scott Catalogue of Errors on U.S. Postage Stamps, only 300 to 400 unused $2 Bobcat error stamps have been reported.

One of the outstanding Canal Zone errors in Kelleher’s Feb. 20 sale of the Campbell collection is a used example of the 1909 1¢ dark green and black Balboa stamp with inverted center and the “CANAL ZONE” overprint reading down (Scott 31a).

This error was first discovered in 1932, according to Kelleher. The second example, the stamp being offered by Kelleher in the Campbell sale, surfaced in the 1950s.

Kelleher states that four used examples of Scott 31a are known, with one having “severe defects.”

The catalogs for the Kelleher Flagship and Campbell sales can be viewed online, with online bidding options available.