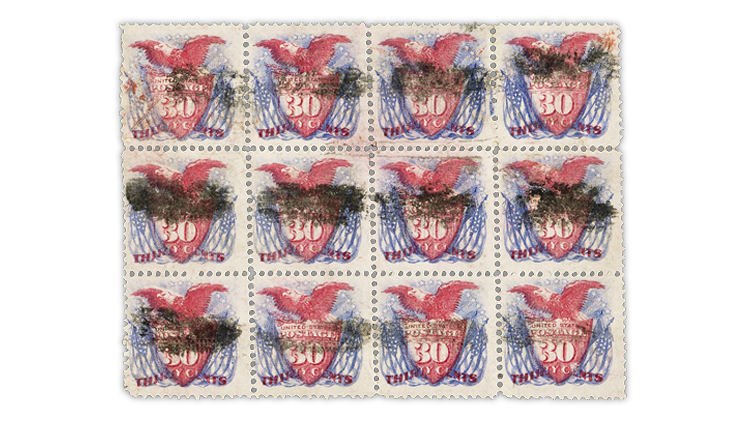 Cherrystone Philatelic Auctioneers will offer this used block of 12 of the 1869 30¢ Shield, Eagle and Flag stamp during its April 22 sale of select United States stamps and postal history in New York City. 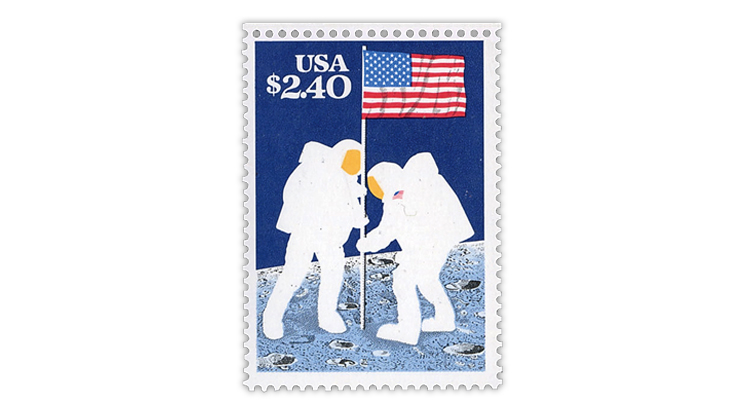 A 1989 $2.40 Moon Landing stamp with engraved black omitted is one of the modern U.S. errors up for bids in the April 22 Cherrystone auction.
Previous
Next

Among the 740 lots available for bids are stamps from the Richard Carl collection and “nice sections of Stampless covers, Free Franks and Autographed letters, Postmasters’ Provisionals, an excellent range of imperf. Classics and other 19th Century used and unused, including Fancy Cancels, Civil War Patriotics, Territorial covers, 20th Century with Regular Issues and Commemoratives to $5,” according to Cherrystone.

Cherrystone describes the block as having “excellent colors” and being “well centered for a large multiple.” Some minor creases and wrinkles that have been ironed out are present, according to Cherrystone.

A block of 12 is the largest known multiple of the 30¢ Pictorial stamp, and Cherrystone states that “three or four are known.”

The 2021 Scott Specialized Catalogue of United States Stamps and Covers does not value a block of 12 of Scott 121 in unused or used condition, but a used block of four is valued at $3,750. Cherrystone lists the block of 12 in this sale with a minimum bid of $1,500.

One of the more eye-catching items among the 37 lots of modern errors and proof material is a never-hinged example of the 1989 $2.40 Moon Landing Priority Mail stamp with the engraved black omitted (Scott 2419a).

The stamp was issued July 20, 1989, 20 years to the day after Apollo 11 touched down on the surface of the moon to mark one of the most significant achievements of the 20th century.

This particular error of the $2.40 Moon Landing stamp makes the two astronauts planting a U.S. flag on the moon look like white ghosts against the dark blue background.

The Scott Catalogue of Errors on U.S. Postage Stamps states that 60 to 80 examples of Scott 2419a are known and cautions that “no black engraved cross hatching should be visible on the white area of the space suits.”