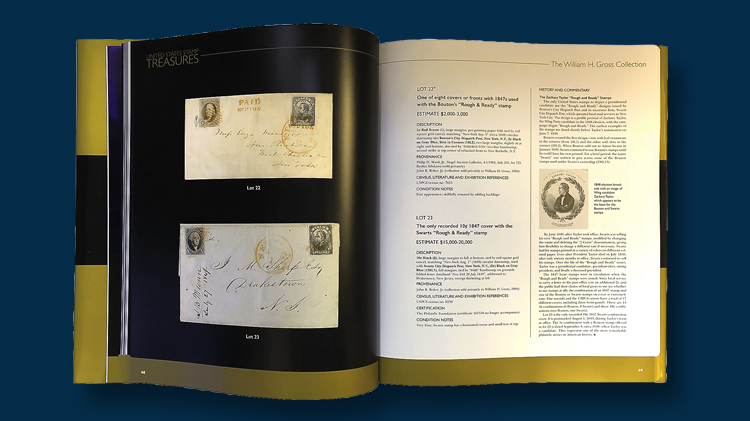 In mid-August, the much anticipated print edition of the “United States Stamp Treasures: The William H. Gross Collection” catalog landed in the Linn’s offices.

The sale is scheduled for Oct. 3 in New York City and it includes many eye-catching rarities, to say the least.

Charles Shreve and Tracy L. Carey brought the collection to Robert A. Siegel Auction Galleries for the auction. This is the first of a series of auctions of material from the Gross collection.

In my June 4 Philatelic Foreword column I wrote about the interesting marketing plans Siegel has been using to find new buyers outside of the philatelic community.

The catalog continues that marketing strategy by making the material very relatable and attractive to someone who wants to become a part of the history of these philatelic objects. Like an art gallery publication, the stamp or cover is the hero, set on a black background on the left page. On the facing right page the basic lot description is provided, and additional historical information and images are used to enhance the story — and to make the potential buyer want to be a part of that story, too.

The catalog is 235 pages and can be viewed at www.siegelauctions.com. The website also has a link to buy a hardcover catalog, a must for philatelic bibliophiles.

In the catalog introduction, Siegel president Scott R. Trepel wrote, “the years from 1993 to 2018 will go down in history as the Gross Era, when his determination and means exerted a gravitational pull on many of the greatest items in American philately.” He also shared his theory of six different waves to iconic collections over the years.

“Now, with the sale of the Gross collection, we start what I call the Sixth Wave, presenting new collectors with an opportunity to establish their own immortal collections,” Trepel stated.

We are on the cusp of a new momentum for philately and I look forward to Siegel’s success in finding new passionate philatelists for the future, while also helping longtime philatelists fill that big space in their collection.