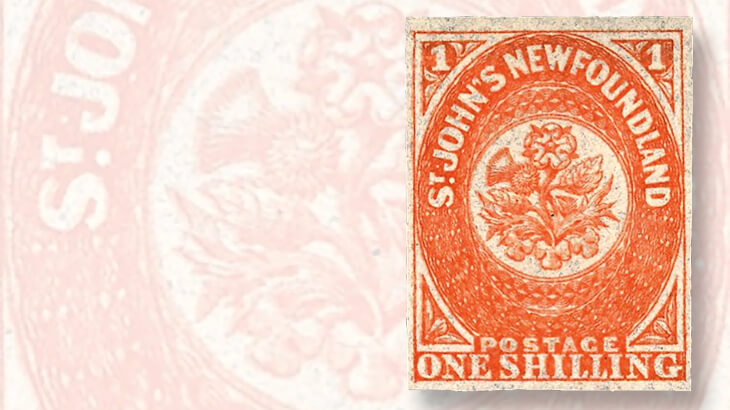 The top seller at Schuyler Rumsey’s auction on June 1 at WSS-NY 2016 was a top-pedigree unused example of Newfoundland’s 1-shilling orange vermilion of 1860, “possibly the rarest classic imperforate stamp of British North America.” It brought $37,375. 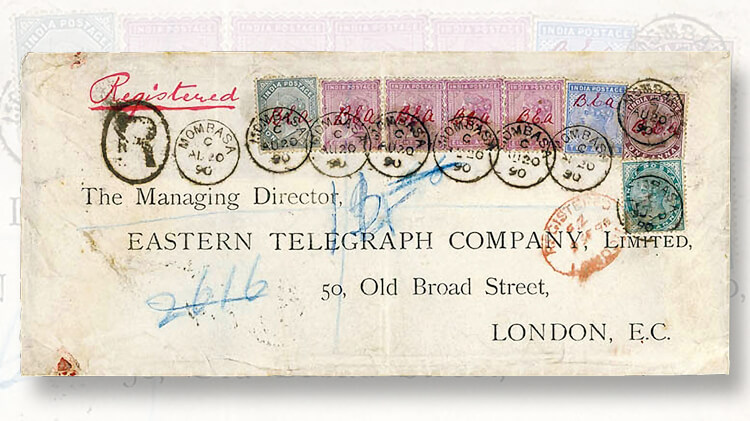 A legal-size commercial cover from Mombasa franked with several Queen Victoria stamps of India and canceled Aug. 20, 1890, one of only six examples of this short-term provisional use, sold for $20,700 at the Schuyler Rumsey auction at WSS-NY 2016.
Previous
Next

Schuyler Rumsey, based in San Francisco, offered its “New York 2016” sale on June 1 at the show, with some worldwide rarities alongside an assortment of United States material.

Just 1,000 were printed of this stamp, and most ended up being used. Only a few survive in unused condition, with several of those either lacking one or more margins, or having less-than-fresh color. In fact, the Rumsey firm counts “only three satisfactory four margin copies with good color.”

The one offered in New York, with a pedigree that includes Ferrary, Lilly and other top collections, was bid up to an impressive $37,375, including the 15 percent buyer’s premium added by Rumsey to all lots.

The stamps — ½-anna, 1a, 2a, 8a and 1-rupee Queen Victoria designs — are listed in the ScottClassic Specialized Catalog of Stamps and Covers 1840-1940 under British East Africa/Stamps of India Used in British East Africa as Scott A1, A2, A4, A7 and A8, respectively. All except the ½a also show a handwritten provisional “BEA” overprint in red.

These Indian stamps were used in Mombasa from July to October 1890, when British stamps overprinted BRITISH EAST AFRICA COMPANY ran out.

The commercial cover, with a preprinted address of a telegraph company in London that was laying a cable in Kenya at the time, is one of just six known with this provisional usage. It sold for $20,700.