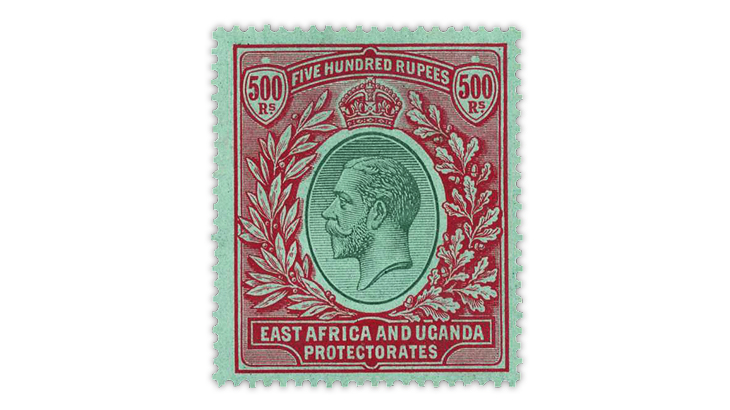 This 1912 500-rupee red and green King George V stamp of East Africa and Uganda Protectorates will be offered during the June 24-28 public auction by Christoph Gaertner.

The Christoph Gaertner firm in Germany will present a series of public auctions from June 24 through June 28, including German and worldwide stamps, postal history and collections.

A dedicated auction of China will open the series on Monday, offering both classic and modern rarities. Two full panes of 80 of the 1980 8-fen Year of the Monkey stamp (Scott 1586) are being auctioned. One pane is unused; the other is described as “possibly unique,” canceled-to-order with a first-day postmark.

According to the auction catalog descriptions, both panes have been folded once horizontally.

The 2019 Scott Standard Postage Stamp Catalogue lists values of $2,150 for the unused never-hinged stamp and $750 for the used stamp. Both values are given in italics to denote an item that is difficult to value accurately.

The stamp is lightly hinged with large part original gum, according to the auction catalog description. It is accompanied by a 1999 BPA certificate.

The Scott catalog notes that the 100r and 500r stamps were available for postage but were nearly always used fiscally.

The Thursday and Friday sessions offer collections from Germany, Europe and worldwide.